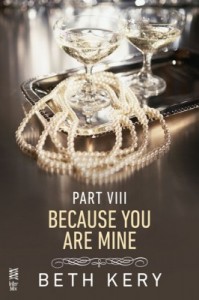 Secrets are exposed, love is challenged, and the future is compromised, when Francesca and Ian face an inevitable decision that will change their lives forever as national bestselling author Beth Kery’s Because You Are Mine comes to a spellbinding conclusion…

Because You Are Mine, Part VIII
Because I Am Yours

From the moment Ian and Francesca first met, the attraction was mutual—a purely, exquisitely physical charge that ignited between them. It couldn’t be ignored—only indulged, evolving into a bond of pleasurable subjugation. But Francesca’s open sensuality left her wanting more. Getting it from a man as mysterious and resolute as Ian was a challenge she never anticipated.

Francesca knows there’s only one way for them to move forward—to follow Ian to London and show him that she doesn’t want him to suffer alone. But when Ian’s past and inner torment is revealed, he experiences a nearly unbearable volcanic mix of emotions for the woman who has dared to love him, despite his inner demons. After exposing Francesca to the limits of his anguish, he wonders if he’s lost her forever. Can he bend enough to compromise to true intimacy…and something called love?

Purchase Because You Are Mine Part 8 at Amazon || BN.com || iBooks

Beth, I’d like to thank you for taking me up on my offer of stopping by my blog every week for 8 weeks! It has been awesome having you on my blog, and I’m so glad I got to be a part of this unique book launch. I have a few final questions before you go:

Q. Can You Describe the Because You Are Mine Serial in your own words?

A. I like to say Because You Are Mine is a bit Cinderella, a bit Pretty Woman, a bit Fifty Shades, a bit Harlequin Presents, and a lot Beth Kery, in other words, super sexy, pure, unadulterated romance. All of the above references have deep roots in romance themes that go back for ages,and it’s fun to be able to re-enliven those tropes for the modern age.

Q. What is your favorite scene?

A. I have said in other places that my favorite was the scene where Ian first makes love to Francesca in the museum. It’s a powerful, raw scene, but for me also poetic and poignant, as this stoic alpha male loses all control in the shadow of Aphrodite. I also love the scene in Noble Tower in installment VIII, the next to last scene in the book. It has a bit of a Cinderella quality to it, and as said, I’m such a sucker for unapologetic romance.

Q. Which came first? The titles or the story? How were they named?

A. The titles came first, then the synopses, then the story. I’m proud to say that I came up with the title Because You Are Mine and the last installment title, Because I Am Yours, almost immediately. I say I’m proud because I’m usually terrible awful at coming up with good titles. I threw a few more out there, the staff at Berkley a few more, and we
whittled down to the eight best. Some of them had to be re-worked as I wrote, and themes slightly changed, but for the most part, the titles came first.

Q. Many of the books nowadays are written from a first person POV, but
yours isn’t. Can you discuss some of the reasons behind this choice?

A. I typically always write in the third person. I love my heroes and want to be
in their head part of the time. I want to convey first hand both the hero’s and heroine’s
struggle, conflict and feelings. It builds sexual tension to an amazing degree, to the
point that I use rapid changes in POV at times purposefully, such as in the opening
scene of Wicked Burn.

My thanks to Ana for having me here all eight weeks during the release of Because You Are Mine! She’s been very hospitable, and I certainly have appreciated her enthusiasm.

It’s been a fun, wonderful journey, and I’ve met so many nice readers. Thank you all for supporting the story and telling me your thoughts about Ian and Francesca. I hope you’ll look for Ian and Francesca in When I’m With You, which begins to come out at the end of next January. This is Lucien’s story, but we definitely will get to see how Ian and ‘Cesca’s romance is progressing. After that, I hope to do another story exclusively about Ian and Francesca. (It’ll be clearer why once readers get a hold of When I’m With You).

Enter here to win a free copy of any installment of Because You Are Mine! (US/UK only please)
a Rafflecopter giveaway