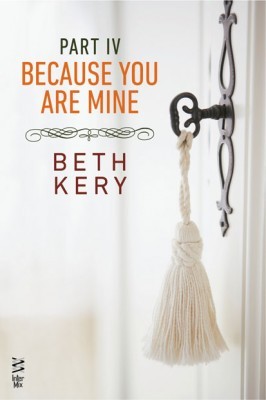 Yes, I’ll admit it. I read during foreplay. When it starts getting good though, I do put the book down. But this time I didn’t want to, though eventually it got a little hard (haha, hard?) to read and well…..let’s just say, it took me 15 minutes to find where the phone I was reading on went after. But when I did, I picked it right back up and kept reading!

We finally get to know the characters more in this one, and though I still did it occasionally, I wasn’t constantly comparing it with Fifty Shades because of the similarities. There were a couple of truly HOT sex scenes, and I felt like I was in Ian’s head a little more on this, which I really liked. The author actually tends to go over parts of the same scene from both POVs, and I really enjoyed reading how each character thought of the same incident. I like how Francesca is standing up to him a bit more, and Ian is exposing himself (in more ways than one) more to her.

So far though, this is not about a true Dom/sub relationship. Francesca doesn’t really know what is involved and Ian hasn’t really explained it. There are no contracts or agreements. Right now there is punishment and submission, but I’m waiting for an ‘official’ pronouncement that she is HIS sub.

I am going to hold off on a rating for now, but if I had to judge this one it would be 4.5 stars and 5 for heat.

*Book ARC was provided by the publisher in exchange for a fair review.

This series must be read in order: Because You Are Mine Reading Order.