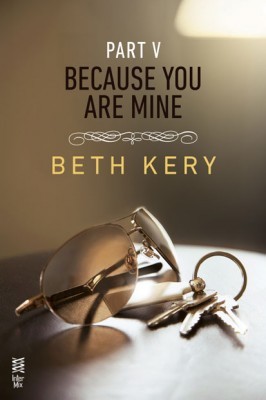 This installment of Because You Are Mine, Because I Said So, focuses on learning more about both characters. Though still filled with some amazing sex scenes, we are finally seeing Ian and Francesca get to know each other more outside of the bedroom, as well as see them explore why they have this attraction to each other. I received this installment from the publisher via Net Galley in exchange for an honest review.

Please make sure you start this series at the beginning, as this is the 5th in an 8 part series. Because You Are Mine Series Reading Order.

Though Francesca is clearly a sexual submissive, she is certainly not a submissive person. In the last book, Because You Must Learn, Ian punishes her for going out for a run without consulting him, and she refuses to agree that she should have to. Francesca is still independent, and refuses to lose herself in this relationship. In fact, when Ian tries to order her a custom wardrobe, Francesca refuses, and is even insulted that he wants to change her. While this may drive Ian crazy, it also seems to be the reason he finds her so attractive. In fact, Ian can’t stand the fact, when he learns it, that Francesca never got her driver’s license and sets out to rectify this lack of independence immediately.

That is part of the appeal of this series. Francesca, being so young and innocent, and Ian, so in-charge and rigid. They both seem to get what they need from each other. Ian gets a submissive and a fresh look on life through Francesca’s innocent eyes; and Francesca gets the domination she needs and the experiences only someone like Ian can provide.

“How could an innocent make him so helpless, flay him to the bone, turn him inside out until he felt as raw, as naked, as exposed as he insisted she become for him?”

As the book continues on, I am getting more and more sucked in to Francesca and Ian. This one had some amazing sex scenes as well as a deeper connection to both of the characters.

“He wanted to tell her how exquisite the experience had been–how exquisite SHE was–but for some reason, his heart began to beat uncomfortably hard. He didn’t like the way he’d felt exposed there at the end…weakened by his need for her.”

Rating for this installment: 4.5 stars, 5 for Heat.

Purchase: Because You Are Mine Part V: Because I Said So at Amazon||BN.com||iBooks