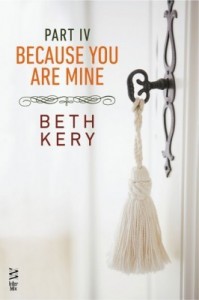 Because You Are Mine 4: Because You Must Learn From a luxury private jet to a daring tryst in a public museum to the intimacy of a luxury hotel, Ian and Francesca come together wherever the spark is ignited. But when Francesca disappears for a morning alone, she discovers an unexpected new shade to Ian’s character. Is it anger, jealousy, or something else entirely? Stunned by the degree of Ian’s reaction, Francesca wonders why his whole life is ruled by discipline, order, and restraint. Only during passion does he show her the captivating depths of his soul. She’s willing to submit to desire, but having every move controlled is something she can never accept. Then Francesca begins to discover what it is that makes a man like Ian do the things he does…
.
This is a series that should be read in order:
Because You Are Mine Series Reading Order
.
Here are a few questions with answers from Beth:
.
Q. How much research was required before writing BECA– — USE YOU ARE MINE?
Beth: The series takes part in several locales, the main one being in downtown Chicago, but also Paris and London. I live in downtown Chicago and am a long-time urbanite, so that part was fairly easy. Ian’s penthouse and his company tower are both situated along the Chicago river, a location where I’m very familiar. Sixteen, the restaurant mentioned in the Trump International Hotel and Tower featured in Part VI, is also right along the river, with breathtaking views. “Researching” in places like that is so difficult–going for a nice dinner to soak up the ambience. 🙂 Francesca lives and works in one of my favorite areas of the city–the Wicker Park/Bucktown neighborhood. Given her youth and artistic sensibilities, I thought it was a fun, appropriate neighborhood for her.

Although I have been to Paris and London several times, I had to brush up on my neighborhoods. Francesca is an artist and Ian is an art connoisseur, so I definitely needed to research some artistic styles and concepts, and even some of the practical details of painting. Also, Ian is the scion of an old, aristocratic English family that is a minor branch of the monarchy, so there were some small details regarding titles, etc. Ian also fences, so I had to do some research about the sport—although I will admit I took some creative license with the fencing scene because it was supposed to be…well, super sexy.

Ana: And it was, that’s for sure! I’ll never look at fencing without getting hot and bothered again!

Beth: I find the ‘mommy porn’ label patronizing on many different levels (and why is it that even in writing, it seems to be said with a smirk?). I think if the creators of such labels actually bothered to sit down and read erotic romance authors like Sylvia Day, Jaci Burton or Shiloh Walker, they might be surprised at the high quality of writing, the interesting characters and conflict, and riveting plots. What’s more, a well-written erotic romance isn’t about gratuitous sex. Instead, sex is an arena for character growth, plot development and conflict. Yes, it’s exciting and extremely erotic, but it’s not written for the purpose of stroke fiction. It’s telling a story, and often it’s a really, really good one.
.
Ana: I think one of my first posts on this blog was me ranting about that term. I use the term lady-porn to discuss some books, but those tend to be books that are written for the sole purpose of arousal. Your books tell a story, and the hot sex is a bonus!
.
Questions from Ana’s Attic Readers:
.
Anais asked: Who assisted you in creating your covers?
The Berkley art department does all the designs. They did a bang up job, in my opinion, on the Because images. In general,authors have fairly little input into their covers, save perhaps some minimal description of characters’ physical attributes and general setting ideas. Often times, our input is used, and other times not. I’m just happy when the overall tone of the book is conveyed. I’ve given up long ago being worried about blue eyes vs. brown eyes, etc.
.
Ana: I also noticed they seem alternate between masculine and feminine. Interesting……
.
Jess asked: Do you like to write series or single books more?
It depends, it’s a toss up. I actually like both. I do love writing a single title that is a world in and of itself, where the hero and heroine are the sole focus. I also love doing series, like Home to Harbor Town, One Night of Passion, and even the serial, Because You Are Mine. Series are very popular right now for readers, I think. All I can say is, I think both have their merits.
.
Thanks so much to Beth Kery. Leave a question or comment here to be entered to win any installment of the Because You Are Mine series. Be sure to come back next week for another chance to win and to see if your questions were answered!
a Rafflecopter giveaway
Related Posts: