From Beth Kery, the national bestselling author of Explosive, comes a red-hot romance like no other—where the rules of attraction are broken with that first electrifying touch. Meet Francesca and Ian. The fantasies of what’s to come begin… 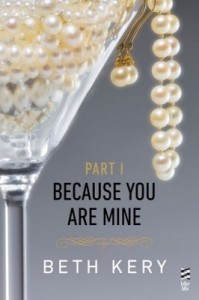 It starts with that first look, when you know you have to have him… Francesca Arno has been commissioned to create a grand centerpiece painting for the lobby of Ian Noble’s new skyscraper. It’s at a cocktail party in her honor that she first meets him—and the attraction is immediate for Francesca. It’s also bewildering. She’s not used to such a wholesale sexual response to a stranger. Enigmatic, darkly intense, with a commanding presence, Ian completely unnerves her. And she likes it.

For Ian, she’s the kind of woman he can’t resist—one that comes all too rarely: a true innocent. But he can sense in her a desire to open up, to experiment, to give herself to the fantasies of a man in control. The first kiss, the first caress, the first challenge for a woman who craves what she’s never had—a man who gets what he wants.

Beth Kery has graciously agreed to sit down for a weekly interview where she will answer some of YOUR questions the following week! PLUS Beth will  give away of that week’s book! Come back each week to see if you’ve won, and see if your questions were answered!

Beth has graciously offered to give away one of the books in her series each week. The winners will be announced the following Tuesday when Beth will be back to answer more questions. Winners may choose from the books available at the time, and that will be gifted to you directly from the author.

Beth has also agreed to choose a few of YOUR questions to answer each week! So leave the questions here by Sunday, August 5th and Beth will answer a few on Tuesday August 7th. Then we start the process over for the week after! Be sure to go through the rafflecopter steps to gain extra chances! Rafflecopter entries are monitored for incorrect entries. Good luck, and…….Ask Beth good questions about Ian and Francesca!