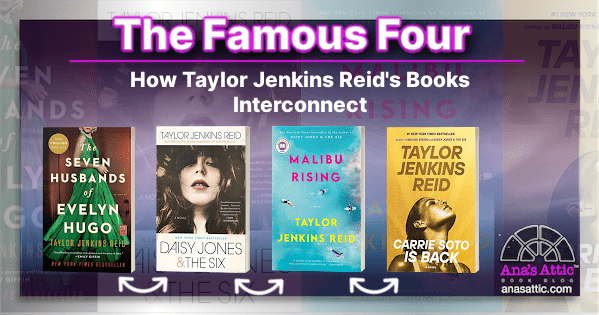 The Crossovers between The Seven Husbands of Evelyn Hugo, Daisy Jones and the Six, Malibu Rising, Carrie Soto is Back plus the novella Evidence of the Affair by Taylor Jenkins Reid.

Have you read Taylor Jenkins Reid yet?

She has 9 books out as of this post. Four books are “historical” and span from the 1930s to about 2010 and they each feature a strong, famous woman. They also have a little crossover between them. There’s a cute short story I threw in because there was a little Easter egg there as well. I am going to list them in published order, talk about the film adaptations, then try to list all the crossovers and Easter eggs I found in those 5 books.

The Seven Husbands of Evelyn Hugo (2017)

The Seven Husbands of Evelyn Hugo was on my kindle for a long time but just didn’t appeal to me (even though I loved Daisy Jones and the Six) until I decided to read some hyped booktok books. Told in a unique way, Evelyn Hugo, one of the biggest Hollywood stars of the 50s/60s, is sharing her stories with a biographer. The story spans 80 years from her childhood to old age.

The book dealt with SO MANY social issues that were even bigger issues in the years the book flashed back to, including interracial couples, gay and bisexuality, misogyny, the casting couch, and so much more. I loved it more than I expected.

See My Review for The Seven Husbands of Evelyn Hugo

Evidence of the Affair by Taylor Jenkins Reid is a short but very satisfying story that takes place in the mid 1970s and is told 100% through letters. This one doesn’t really fit with the others that much in that the heroine wasn’t famous, but there are some little easter eggs I caught, so I am mentioning it here.

See My Review for Evidence of the Affair

My first book from Taylor Jenkins Reid was the audiobook Daisy Jones & The Six, and it’s still one of my all-time favorites. I grabbed it the day it came out, because anything about music in the 60s and 70s is my jam. Another unique storytelling technique was used, as this one was told documentary style through interviews. The audiobook featured a cast of over 20 narrators including Jennifer Beals and Benjamin Bratt.

Daisy Jones was was clearly based on Fleetwood Mac’s Lindsay Buckingham and Stevie Nicks, there was even a female keyboard player like Christine McVie, but it was even better because the author was able to make the story work out how she wanted. After reading, I literally looked it up to see if Daisy Jones and the Six was a real band because it felt SO REAL.

See My Review for Daisy Jones and the Six

Malibu Rising by Taylor Jenkins Reid is the story of Swimsuit Model Nina Riva and her surfing siblings. Told mostly in flashback, the actual story takes place over 24 hours at a big Malibu party that started the fires in the 1980s, and flashes back to the 1950s where her parents met. Mick Riva, (who crosses into all the others, but more on that below) is the famous singer and deadbeat dad to the 4 siblings that Nina ended up raising herself.

This is the book that ties everyone together the most.

See My Review for Malibu Rising

Carrie Soto is Back by Taylor Jenkins Reid is about tennis champion and record holder Carrie Soto as she comes out of retirement at 37 to defend her record. The story follows her entire life of tennis from her father who planned on making her the best tennis player in the world before she was even born in 1957.

Carrie Soto is Back tackled so many issues women in sports face, especially women of color. This powerful story really illustrated the costs of greatness, and the sacrifices one needs to make in order to make it to the top. Carrie Soto is Back is a book I shouldn’t have loved: I don’t like sports and I insist on loving the heroine. But I grew to love her and the tennis kept me on the edge of my seat.

See my review for Carrie Soto is Back

Daisy Jones and the Six (this links to IMDB)

Daisy Jones was Reese Witherspoon’s March 2019 book club pick, and she’s producing the television series for Amazon, which wrapped filming in the spring after years of delays from COVID. The 12 episode series stars Elvis Presley’s granddaughter Riley Keough as Daisy and Sam Clalfin as Billy. The adaptation will also feature original music written by the author, and Taylor Jenkins Reid was also one of the producers. No release date has been announced yet.

The Seven Husbands of Evelyn Hugo

Initially slated to be a miniseries, Netflix picked up the rights in March and announced they would make it a feature film. There is a lot of disappointment about that, since the book is perfect for a miniseries, as it’s told in 7 parts. There has been no news since then, only some casting speculation. Little Fires Everywhere creator Liz Tigelaar is adapting it and Reid is an executive producer.

Little Fires Everywhere creator Liz Tigelaar is adapting this one as a limited HULU series and Reid is an executive producer. It’s still in development.

Though not connected to these books, One True Loves is a feature film in post production. It stars Phillipa Soo, Luke Bracey and Simu Liu. No word on when and where it will be released.

Tell me, have you found any other crossovers? Please let me know in the comments! 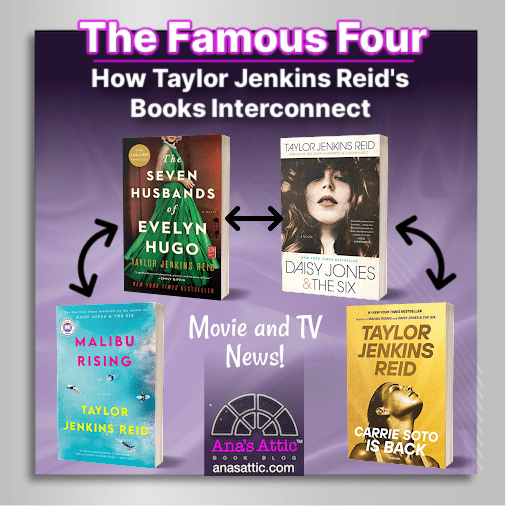