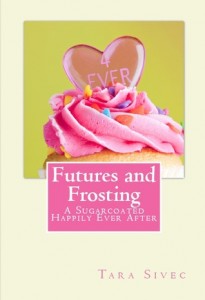 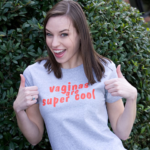 . I know I’ve talked about my girl crush on Tara before. This book, it made me happy down to my dumbo eared vagina. I had some stalker tendencies before when it came to Tara, but now I want to stalk everyone she knows so I can find out who the characters are based on.

Futures and Frosting is like The Hangover, Bridesmaids, Friends, Meet the Fokkers, and How I Met Your Mother combined, in fact, I’d love a weekly sitcom book from Tara…I’d pay $.99/week for a short story with these guys in it! With all the weekly serial books out there, this would blow them all out of the water (teehee, I said blow them).

If you haven’t read the first in the series, Seduction And Snacks by Tara Sivec, what the fuck are you waiting for? It was hands down, the funniest book I ever read, so funny that, uummm…..I had an incident with slippage….just read that review here.

Well Tara surprised us with the sequel two weeks early. On an already busy weekend, I dropped everything to start this book and immediately began cracking up….after I got all choked up at the acknowledgements (yes, she put my name in them! I’ll even excuse her vagtastic ass for spelling it wrong) ******It has since been fixed. Is she awesome or what?

The chapter names even made me laugh! Here are a few:

This book begins where Seduction and Snacks left off. Claire and Carter are working on melding their lives together, living together with Gavin. Of course, after living alone for a long time there can be issues……like, Carter snoring and Claire’s fantasy ways of stopping it, Carter never replacing the toilet paper, and my favorite:

“Just this morning while he slept, I had left Carter a box of his favorite candy next to his pillow……..I figured it would soften him up to the note I placed next to the box telling him if he left the toilet seat up one more time and my ass got an involuntary bath at six in the morning I would put super glue on the head of his penis while he slept. I had even signed the note with a couple of Xs and Os. Who says romance is dead?”

The first half of the book was basically the drunk adventures of the whole group, starting with Liz and Jim’s co-bachelor party on a limo bus tour of various wineries.  (Drew, of course wore a shirt with a corkscrew that says “I Pull Out” for the occasion).  Liz’s mom also tries to join the fun by pulling out every penis shaped item she can find….scary story: I had a penis party for my son’s 13th birthday. I even have some candles left, see?

So this party bus also had a bathroom, in which a completely shitfaced Claire and Carter went together, and the rest of the bus heard:

“If you knock on my back door, I will totally let you in….careful back there, though, there’s a rickety step. Don’t fall in my back door”
And the next morning from Carter…”you puked on my dick”

The morning after….is the morning Claire is set to meet Carter’s very normal, very uptight parents. While there, she discovers that she had a wonderful night of drunk facebooking the evening before. On Carter’s families’ wall…

And lets not forget the mention of “flapping dumbo eared vaginas, burning clown car vaginas, vaganistic clitoral, liptastic whore dizzle“ and more. Claire, with her drinking should NOT be on Facebook!

But let’s not forget why we are all reading this. Claire and Carter’s love story. They are so perfect together. Carter is trying to propose to Claire but something keeps happening to stop him. He loves her so much and and it is clear she loves him too, but her parents were pretty bad examples of marriage. In fact, Claire’s totally wacky parents are hysterical. So much so, that when Claire was young and too boring they used to “invent things to do just to mess with her and try to fuck her up a little bit”, but I digress. Carter keeps screwing up the proposal and Claire thinks he doesn’t want to marry her. In fact, Claire is obsessed with watching wedding shows on TV, but covers it up by letting Carter think she is obsessively watching porn.

Amidst all this, we have the ever so charming Gavin. Gavin is just turning five, and I swear, he is the coolest kid ever. Scary thing is, my family is going to think I wrote this book, because my son IS Gavin!

“What’s your favorite thing to do?”
“Fart in everyone’s face,” Gavin says between giggles. “FART!”
“You sure like to say ‘fart’ a lot.” Lisa says with a laugh
“Cuz I like saying it forever, punk!”

In fact, my kids asked what I was laughing so hard at, after them bugging me all day, I finally read a little interview with Gavin. My kids were hysterical, so much so that my 7 year old got carried away, pulled down his pants and started rubbing his wiener on his brother while I laughed (though I tried to yell at him). Big brother kind of stopped laughing at that point…. (point haha), especially when his little brother tried to stick it in his ear (it took everything out of me not to make an eargasm joke there).

But seriously, I think Tara has placed a hidden camera in my home for some story inspiration. “Daddy juice”, scheduled c-section stories, uptight moms who complain about c-r-a-p, plus adventures in the “basement”, and most importantly “juice bag” I KNOW that was stolen from my kid!

I think my favorite quote may be:

“If this whole display was a story I was reading, it would be a disappointing ‘did not finish’ for me”

Tara, you are fuckin’ awesome!!!!!!!! If have a t-shirt for when you are around people like that: 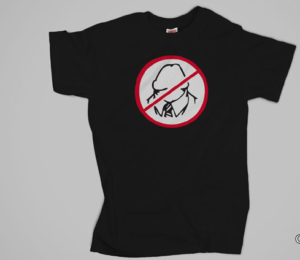 This book was so filled with zaniness, and I learned a whole bunch, like google is never wrong, you only have to eat a little of a pot cookie, (seriously? I would have had like, 4), and that ‘relaxitives’ can help you stop snoring. I also learned more about sports: a new way of playing baseball, and “Tee time”!

Jenny and Drew need their own book(s). With Drew’s shirts (and aprons–“I didn’t wash my hands before I fondled your meat“) and Jenny’s mispronunciations, they would make a great series.

Apparently, these books aren’t for everyone. You need to like over-the-top, raunchy silliness. I loved every second of it. Personally, I think you all need to get your floppy vaginas online and buy these books. “THE POWER OF THE ORGASM COMPELS YOU!” and if you don’t, “I’M GOING TO PUT MY NUTS ON ALL OF YOU!!!” 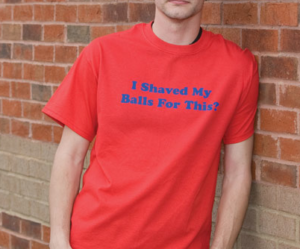 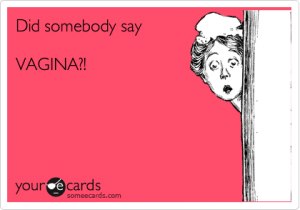 I would have kept writing, but my husband is here, and he needs to make a “phone call”.