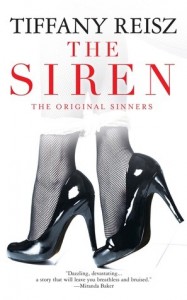 I’m so glad I did. Make no mistake, this is not considered a romance book. There is no HEA. It is an erotic novel, and there is sex, but not the kind of sex that makes you want to have it yourself. It pervades the whole book, yet is glossed over in many ways. This book is different, almost exotic. It was written so well that despite the dark subject matter, you couldn’t help but go along on this seductive, emotional ride. Though the subject matter and story line were on the darker side, there was a lot of humor in the book which kept it from being too dark for me. *Warning: there is some brutal S & M and lots of religious undertones, and some other taboos that may be disturbing for some Catholics and conservatives.

Nora’s description of her book-inside-the-book is also a description of this novel: “It’s kind of a love story. Not my usual boy-meets-girl, boy-beats-girl story. My two characters love each other but they don’t belong together. The whole book is them-against their will-breaking up.”

Zach is a hard-assed editor known as the “London Fog”. Perpetually cranky and guilty since his wife and love of his life left him, Zach moves to the States and has 6 weeks left in the New York office of Royal House Publishing before he moves to California and heads the office there. Zach is an uptight (but hot) Brit who at first refuses to even think of editing a trashy romance novel. After some convincing from his boss, he meets with Nora. And Nora is a force. Zach is intrigued by her to say the least, (he is also scared of her) and begrudgingly admits to her talent as a writer, and the fact that this book, with a lot of work, may very well be a great one. But he, and only he, holds the fate of her novel in his hands, and agrees to work with her for the next 6 weeks. The sexual tension between them is incredible.

Then there is Wesley. Sweet, gorgeous, wonderful, innocent 19 year old student, Wesley, lives with Nora and works as her intern. He is also her best friend. Nora is 33, and proclaims Wesley is her 16 year old lover for “street cred”. In reality, despite the fact that they both want each other, their relationship has been completely hands-off. Wesley is a good, normal Christian, a virgin, and Nora knows she shouldn’t sully it up with her BDSM background, which is all she has ever known. Wesley is completely in love with Nora, and she loves him as well, but isn’t truly capable of vanilla love, and she is so afraid of losing him, the light in her darkness.

I can’t describe this book without bringing up Søren again. Søren became Nora’s Dom when she was only 15, but didn’t take her virginity until she was 20.  Though she left him five years before, Søren still controls Nora in many ways. He loves her and only her and is just biding his time before he gets her back. Søren is brutal. Scary-brutal. But he also shows a tender side. Gorgeous and commanding, he can’t help but command a room, and Nora will love him forever; but had to leave him to find herself. Yet Nora can’t help but be drawn back. Over and over.

I wondered throughout the book, who do I want Nora with? Zach? Yes. Wesley? Yes (but at the same time, no). Søren? No. But can she ever really love anyone else?

Wow. Just…….wow. This book has my brain on overdrive to the point that I don’t even know what I just wrote. I want to jump in and read the next short story in the series immediately. Yet I’m almost scared. Tiffany Reisz has no problems tackling all taboos. If you are easily offended, this is not the book for you. But if you go in with an open mind, it can be amazing. Can I say I LOVED it? I’m still not sure. But I am engrossed by it, enthralled, and unable to walk away.

The series has a load of “prequels” to this book. According to the author, they are still meant to read AFTER the Siren. Please see the reading order here: The Original Sinners by Tiffany Reisz Reading Order