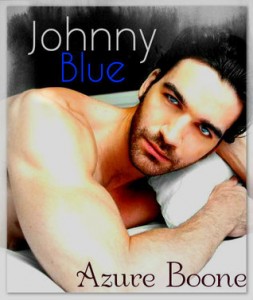 Johnny Blue by Azure Boone was a hot, sexy read and a sweet love story. In this case, hot and sexy wins out, but that’s OK, I wouldn’t mind some hot and sexy times with Mr. Blue Eyes. I mean, LOOK AT HIM!!!

Jewel is an innocent country girl who suffered a big loss years before, and has not had a boyfriend since.  She follows the ‘bum’ who has been painting murals all over town back to his ‘home’, she says it’s to warn him by leaving a note about a prank the neighborhood kids plan on playing on him, but she was also bet that she wouldn’t go. So she whips out her cell phone and starts taking pictures. She sees lots of beautiful paintings around this dark, creepy place in a rundown building. Then she climbs a web covered stairway and finds herself in a beautiful, cozy home. As she snoops around and takes pictures, a gorgeous, clean-shaven guy, wearing only jeans, asks if he can help her.

They have an immediate attraction, and she can’t believe this is the same unshaven, shapeless guy who paints murals in the thick of night. His art is beautiful, (all with strokes of blue like his eyes) and she agrees to let him paint her the next day. When she gets there, the spark and anticipation are palpable. After disrobing, she notices he is naked with his shlong just hanging out as he begins to paint (he says he always paints like that). WTF?

Anyway, what begins with a paintbrush, turns into some super hot sexing! And I mean super hot! Johnny is a total alpha, looks at her her like he’s “seeing some kind of phenomenon”, and devours her with total desperation and reverence.
“Hold your legs wide open for me. I’m going to lick and suck you till you come”
And boy, this painter knows how to use his fingers too!

He was a total alpha in the bedroom, demanding that she look at him:

“I never broke eye contact, and neither did he. Honestly, in all my life, I’d never felt anything like it. Such a connection made to the deepest part of my being, places I had no clue even existed. he just walked right on in and marked me with some kind of forever”

At this point, these two don’t even know each other, and we don’t know them either. We get to know them a little more, but the book is mostly amazing sex with this deep connection that they both feel. But it’s never explained why.

This book had plenty of great sex. At about 80 pages, about 60 are hot sex. This book had such potential to me, but it wasn’t fleshed out (ha ha) nearly enough. Things that should have been delved into were brushed over (that’s what she said!). This could have still been a novella if another 20 pages of background on the characters was included, and the author showed more reason for their connection in the beginning, and I would have really enjoyed it.