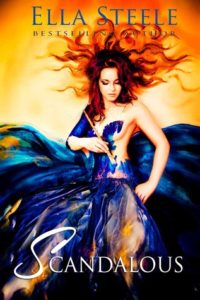 Scandalous is by a normally YA bestselling author HM Ward under the pen name Ella Steele, but this is an adult novel. It is a 4.5 overall (I could round up or down, in this case I chose up) and a 4 for heat. Had the story been longer it may have pushed to a 5, but it all happened way too quickly for my tastes. The art sounded so interesting. I would love to know if it is based on someones work, and I’m dying to see it. It is very difficult to describe beautiful art, but the author did it in a way that left you a bit breathless.

Jack Gray is a millionaire artist. He paints tastefully erotic art that sells for millions per painting. Because he must first paint (as in-paint on) nude models, he needs to keep his reputation clean as a whistle, and always has a schoolmarm type of assistant in the room while he works with models. Abby moved away ten years ago and became an ordained minister (read:abstinence!) but was forced to take a sabbatical without pay from her church when she did something wrong. Jack and Abby almost had a “thing” in High School, in fact he was one of the reasons she took the vows. For Jack, Abby was the one who got away. But when he hires her for the assistant job, all the old sparks were right there.

Well as they fall in love, Abby has to re-think her place in life. {Frankly, I thought the decision to even work with temptation was so quick it was a little cray-cray–$270,000 in college debt, and if she sleeps with this guy she loses everything. This could have been been written very well at this point, but her vows didn’t seem so important compared to love–I would have liked to see the author expand on that a bit.} So, when a scandal hits and reputations are destroyed what happens? Was she just a naive fool? (I’m not telling. read the book)

I wasn’t thrilled with:

This was a unique, sensual book that I recommend for a quick read.

Update: There is a new cover and the name Ella Steele is no longer used here is the new cover:

A Dozen Top Romances for Summer