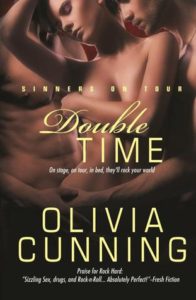 Holy Hotness, Olivia Cunning is the master! Though I enjoy her One Night With Sole Regret Series, The Sinners On Tour Series totally has my heart. And my vagina. Seriously, Double Time (Sinners on Tour) was one of those books where my husband almost had enough and said no more to me! I mean the whole time I was reading this book I was like this:

But not only is it HOT as hell, it was amazing. I love Trey!!! I am not usually a huge fan of m-m books, but I do like m-f-m. In this one we have m-f (a lot), m-m, and m-m-f and m-f-m and it was ALL Fuck-hot! There was only one issue I had with this book. This was written as the fifth book in the series, but released third. This was a really stupid move on the publisher’s part, unfortunately. Nobody seems to know why. (Personally, I think it introduced the next series too well, and they aren’t the publisher, but I could be making that shit up). But it really didn’t detract much from my total fangirl love of this book.

Trey has been in love with Brian for 13 years. But Brian is married and just having his first baby. Trey knows it is time to try to move on, and while doing it, decides to swear off men. Lucky him, right then, his brother Dare’s band is having a blind audition for a new rhythm guitar player. At first, Trey could have sworn it was Brian playing guitar like that, but he found the feisty, hot, tough tomgirl, Reagan Elliot, and BAM! Instant hot connection. Reagan has played metal with guys for a while now, and fits in so well with the rockers (LOVE her tattoo) and the spunky girl turns out to be a great match for Trey. They start off rocking it in the bedroom (and against a wall, a hot tub, a limo….)

“I want to kiss every inch of you,” He murmured and ground his cock against her mound. “Then I want to lick every inch. And touch. Then suck. Then Fuck.” He gave her hair a hard tug. “Every inch.”

She wanted to shout, Yes Trey, kiss me lick me touch suck me fuck me, all of me, all of me! But it came out as an incoherent gasp. “I will find all your spots. Pleasure you until you beg me to possess you. When I finally do, I’ll plunge into you hard. Deep.”

But it turns into more.

“Look at me Trey” He shook his head; he never looked his lovers in the eye when he was joined with them. “Trey, look at me”…… He couldn’t look away. Didn’t want to look away. He saw her. Not as just a body to sate his lust or a personality to amuse him, but all of her. Reagan.

Reagan’s best friend and roommate, Ethan, is also her ex-boyfriend. Why ex? Because she caught him cheating on her with another guy, and now assumes he is totally gay. But Ethan is still in love with her. So when Ethan meets Trey, he wants to get rid of him and jump him at the same time. He sees it, but Reagan still doesn’t know Trey is bisexual. When Ethan comes on to Trey, he tries to resist, but realizes he needs to come clean and tell Reagan the truth, because he can’t deny that part of himself any longer.

So what’s the perfect solution? Yup, some 3 way lovin’. You don’t have to tell me twice!! Yup, I would have NO issues with these two guys worshiping me!

While I don’t normally get into the scenes with two guys alone, Olivia Cunning is the queen of the hot sex scene. And it didn’t matter who was doing it, it was all scorching hot! But when the three of them were together????? Holy fucking BOB, I swear, my phone (kindle) got so hot I had to put it down (or maybe that was just me having to get my freak on with my husband again).

“Fucking A, Trey rocked her world. And Ethan made it spin.”

Check out the official web page for the fictional band The Sinners!!!! It has photos, bios, discography, even tour dates! http://www.sinnersontour.com/