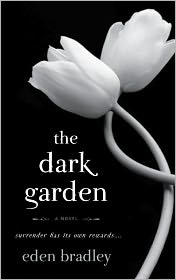 The Dark Garden by Eden Bradley was an artistic, sensual BDSM-lite novel. It wasn’t so much about the club, or the toys, or the sex, but much more about discovering your true self. The novel was well written, and told in a very classy, sensual way.

Rowan is a Domme, at least at first. But she is feeling some dissatisfaction with this position. It just isn’t as fulfilling as it used to be. At one time she was submissive, but after a terrible relationship in college, she decided that nobody would ever take advantage of her again. So she became a Top. One evening, a gorgeous hunk of Dom, Christian, walks into the club, and there is an instant connection and attraction between them. He quickly sees that she is hiding a submissive persona underneath that Domme facade.

Christian is an artist who just came back from 6 years in Europe. Primarily a sculpture (stone) he can’t help but want to draw her, paint her and sculpt her. Why?

“Because you’re beautiful to me. Because I love the lines of your body, the shape of your face, even your hands. Your bone structure is perfect. And maybe because I never want to forget you.”

But more than that, he is drawn to her, and his desire to discover more consumes him immediately. Though Rowan is attracted to him, (in fact, she fantasizes about him), she knows nothing can happen because they are both tops.

Until Christian proposes a deal: 30 days he Tops, she bottoms. No sex. Just to see if what her true nature is. Though Rowan finally accepts the challenge, she has a lot of difficulty with it. She constantly denies her own nature, has panic attacks and runs away. Christian is extremely patient and pushes her limits while being patient and loving. He is the perfect Dom.

He wrapped his fist in her glorious cascade of dark hair, pulled her hair back firmly, and spoke softly into her ear.
“You’re doing beautifully, Rowan. But I have more in store for you. Are you ready?”
She gasped.
“Are you?” He tugged a little harder on her hair. “Tell me.”
“Yes!” she hissed.

At first, there is no sex, just Christian dominating Rowan. There is lots of flogging and a new toy I had never heard of, a “vampire glove”, a leather glove with sharp points in the fingers. There is a lot of ‘going into subspace’ which sounds awesome, but I couldn’t see ever turning my brain off that much for something like that to happen to me.

There is also another couple in this book, April, Rowan’s friend, and a sub from the club, and Decker, a Dom who doesn’t commit. I enjoyed their story, and would have loved to have read more about them.

I enjoyed this book very much and recommend it. Something held me back from totally falling in love though. I didn’t love Rowan’s character, and though I loved April and Decker’s story, I found that it distracted me from Rowan and Christian.

Side note: This book was originally published in 2007, and re-released with a new cover and a new blurb adding it to the “if you liked Fifty Shades” category. ***Random House sent me the copy in exchange for a fair review.

Purchase The Dark Garden at