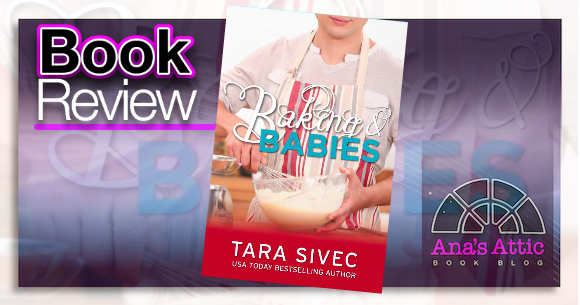 Romantic Comedy. Standalone storyline, but you should read the others to fully know the characters.

Disclaimer: NO BABIES WERE BAKED in this book. The author may have been baked, the characters may have gotten baked (Grandma!), but there were no babies near ovens.

OK, moving on. It’s no secret that Tara Sivec is my reason for living. Really. Look in acknowledgements and you’ll see, I’m hers too, I know it. Seriously, The Chocolate Lovers and Chocoholics are my favorite books ever. I love all of Tara’s books, but those series are the first books that made SCARY STUFF happen to me! Lets just say…my vagina was involved. You can check out some of the events here and here. Tara is also the reason for Wicked Book Weekend, I had to meet the totally sick brain behind these books. (Wow, 2016 will be Tara’s 5th and I won’t do it without her).

If you are unaware, The Chocoholics series is about the kids of the characters in The Chocolate Lovers Series. But honestly, to me, it’s still mostly about the original crew, just all grown up. And they are still a bunch of crazy stupid assholes. I fucking LOVE them.

That HURT, you dick nose slut-box! I HAD CANCER!” Aunt Claire responds.
“Oh fuck right off! You HAD cancer, you don’t have it anymore and you should be able to take a punch, you pussy!” my mother shouts back.

Molly is Liz and Jim’s daughter, and sister to Charlotte. She was the quiet Ninja. She didn’t hop on the crazy train that was the rest of the Seduction and Snacks crew. She was the kind of bitchy sister who messed with everyone else quietly. She was focused on school and her career as a pastry chef. Well that, and her teacher, Marco. Luckily she was about to graduate, so Marco wasn’t off limits any more.

Marco had a secret. He was crazy about Molly, but worried that his secret would drive her away. Thanks to Charlotte (I wasn’t happy with her so much in this book) Molly got roped into a crazy scenario, and had a secret she was keeping from Marco as well.

Now she’s going to smell like cinnamon, apples and somebody else’s sperm. I don’t know who this loser is, but I’m sure his spunk tastes like toxic waste. I shouldn’t have waited so long to make my move.”

After very little getting-to-know-you time, Marco got himself into a cover-up situation with Molly that there was no coming back from. He was dumped head first into the crazy that was the Seduction & Snacks crew. It’s a shame, because Molly really liked him, but once he saw the crazy mess of her family, she knew he’s be running for the hills.

Does your family ever do anything normal?”…
“Dammit, Tom Brady! Not in the mashed potatoes!” Uncle Drew shouts from the kitchen…
“Normal is overrated. They’re bat shit crazy every day of their lives…”

I freaking LOVED Marco. He was totally sexy, down to earth, had an equally crazy family, and fit right in with this nutty group. (Yeah, I said nutty).

It’s hard to be irritated when my penis is happy after hearing Molly call me her boyfriend. It’s too conflicting and it’s always best to go with whatever emotion my penis wants, and my penis wants me to be happy, dammit.”

Marco was so crazy about Molly that he went through some major hazing from the guys to stay in there. Smelling like pee and eating a bag of dicks may have been involved.

Charlotte and Molly’s relationship as sisters was like a poster of loving siblings.

It was all Tom Brady’s fault. Or Betty White. 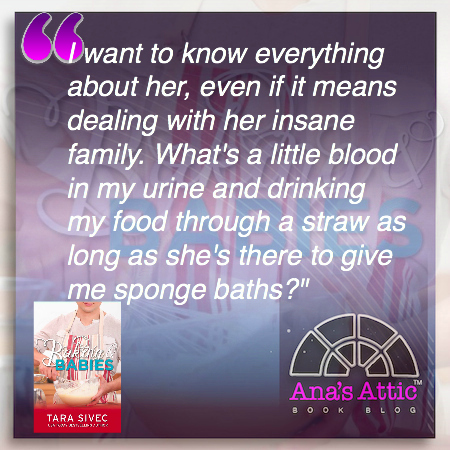 I couldn’t have asked for a better end to my favorite series. Tara knocked this one out of the park with her mixture of crazy, hysterical, funny and sweet without going overboard on any of it. Molly and Marco were adorably awkward together, yet just as crazy as the rest of them in their own ways. As much as I love all of the books in these series, Baking and Babies is for sure my favorite of the three in the Chocoholics series (I can’t include Tattoos & Tatas in that, because that’s a hands-down favorite). If you have read this series, do yourself a favor, stick in a maxi pad, grab a glass of wine or a “special” cookie, and lock yourself away with a box of tissues to wipe away tears of laughter, and sadness that it’s over. If you haven’t read this series, what the fuck are you waiting for? 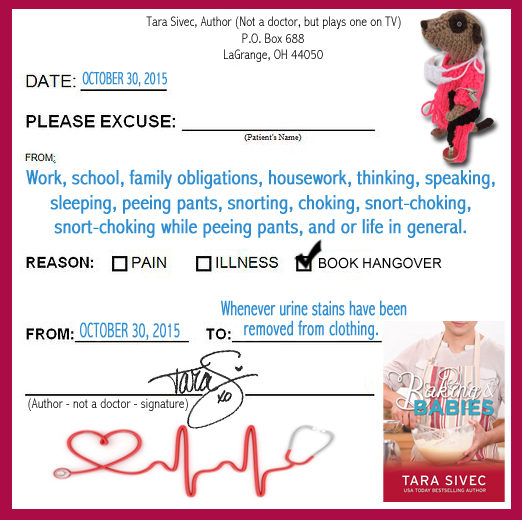 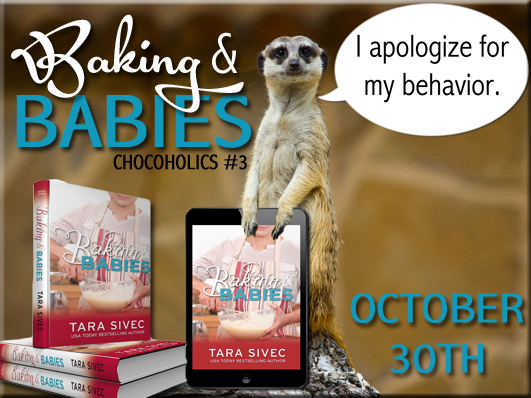 All of my reviews are linked here. 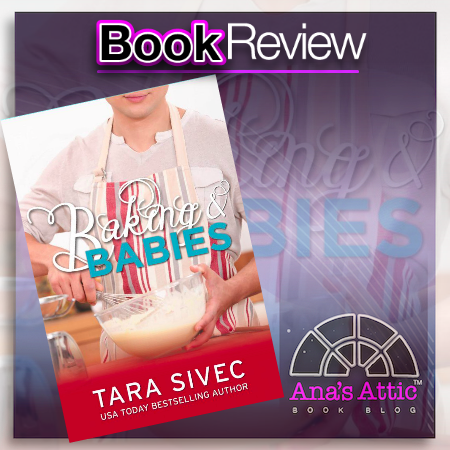