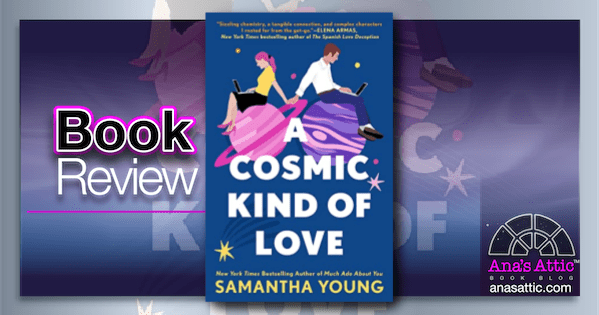 A Cosmic Kind Of Love by Samantha Young

A Cosmic Kind of Love was supplied by Net Galley for an honest review. This post contains affiliate links.

I love space and the space program so I was excited to grab A Cosmic Kind of Love by Samantha Young because it features an astronaut as the hero. Captain Christopher Ortiz was a fighter pilot-turned astronaut, and Hallie Goodman is a clumsy, pink-haired, people-pleasing event planner.

Hallie was planning an engagement party for a NY socialite, Darcy Hawthorne, who e-mailed her a few folders of ideas for what she wanted for the party. Darcy didn’t realize that she also sent a folder of video letters her ex-boyfriend, Captain Christopher Ortiz, sent her from the International Space Station. Hallie clicked on one and was immediately sucked in. She knew she shouldn’t but she watched them all, multiple times.

She felt so guilty that she sent her own video apologizing for watching videos not meant for her, but it bounced back to her, email not found. She enjoyed making the video, and started making a video diary and kept sending them, knowing nobody would see them. But he did. Chris watched every single one and developed quite a crush.

“When I’d spotted him across the room, it was like the entire party faded out. There he was. And shock of all shocks, he was looking at me.”

Hallie went through a lot of character growth in this book. She was always the people-pleaser who couldn’t say no, especially to her parents who put her in the middle of their extremely toxic divorce, I was happy to see her grow a backbone.

Chris was a Latinx role model to many, but he grew up knowing nothing about his Latin background, and his relationship with his father was extremely toxic as well.

“How can my son be so brave as to fly fighter jets and travel into space, and yet be such a lazy disappointment now?”

There was a LOT of angst in this book, yet I really liked how healthy their relationship was…at first. I loved both characters so much and I totally rooted for them the whole time. 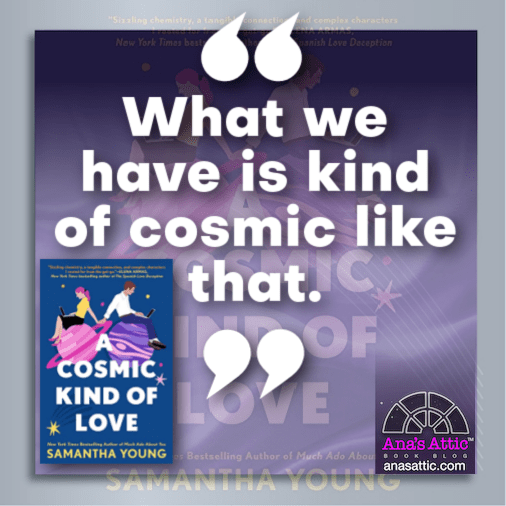 A Cosmic Kind of Love was a unique, fun and sexy read with super likeable main characters. Their parental strifes took away a little from the feel-good romance, but I would still recommend this wholeheartedly—I gobbled it up. Twice.

Purchase A Cosmic Kind of Love by Samantha Young

Narrated by Andi Arndt and Noah B. Perez 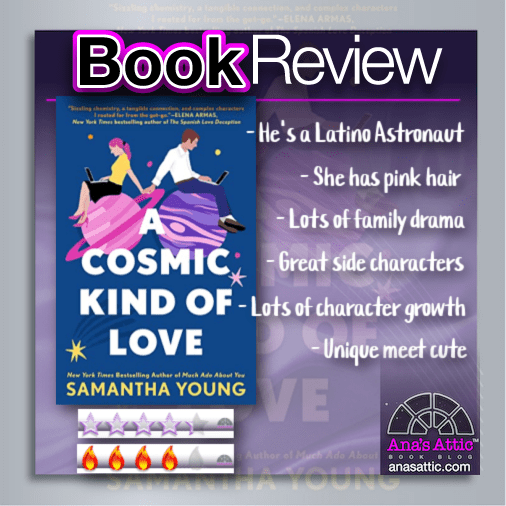