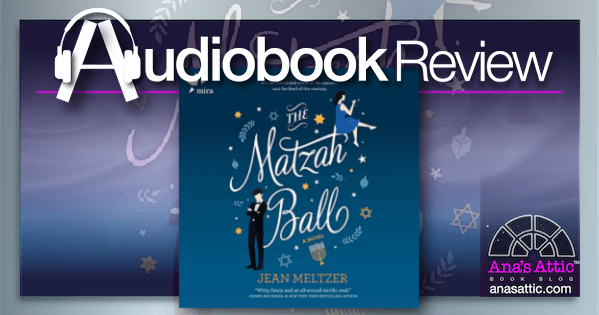 The Matzah Ball by Jean Meltzer

I love reading Holiday books. Yes, I was brought up Jewish, but growing up I felt left out of the magic. When I married my husband, who was brought up Catholic, I used it as an excuse to go crazy for Christmas. You could see our house from space!

I also haven’t been to a synagogue since my Bat Mitzvah. I’m not a practicing Jew though I celebrate the major holidays by cooking “Jew food” as my kids call it. I’m still, I guess you can say–“culturally Jewish”. So some of the Jewishness of the book went over my head and at first, put me off a little.

I look for Hanukkah books every year, but rarely find any that I can relate to, as the characters are usually gay. In the Matzah Ball, Rachel Rubenstein-Goldblatt is very relatable, because not only is she a Jew from Long Island that loves Christmas, she has a chronic illness, just like me. She went to sleep-away camp too! I think most of the love for The Matzah Ball actually comes from the relatability of the main character. The story itself was OK, but had a few parts I loved and a few I didn’t, at all. 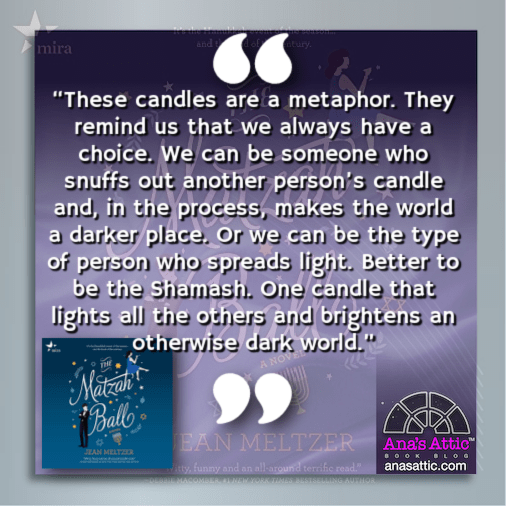 Rachel Rubenstein-Goldblatt is the daughter of a VERY prominent rabbi on Long Island. She grew up in a strict Kosher home where loving Christmas is not accepted. She has M.E./CFS, also known as Chronic Fatigue Syndrome, and for her, Christmas movies and books are magical, and her escape from the horrible daily assaults on her body. So magical, in fact, that she has made a secret career out of being a best-selling Christmas Romance novelist under a pseudonym.

Jacob Greenberg is the CEO of an entertainment company that throws big music festivals (think Coachella). He is planning the event of the season, “The Matzah Ball”. He is also Rachel’s first love and first kiss from sleepaway camp who humiliated her and broke her heart, and she never forgot it.

This year, Rachel’s publisher has told her that they don’t want any more Christmas books from her, this time they want a Hanukkah book. But Rachel’s obsession and love are for Christmas, Hanukkah doesn’t have the same magic. So she decides that getting a ticket to The Matzah Ball is the way to get some inspiration. The only way to get the coveted ticket is through Jacob. And the only way he will give her one is if she volunteers for the full week before.

The problem is her CFS. She is not out about her disease. I can so relate to this! The name Chronic Fatigue Syndrome is THE WORST. People think “oh, you’re tired, take a nap and you’ll be better.” or “change your diet”.  It makes the day-to-day exhaustion and pain seem trivial. You have to save up your energy for events and then take days to recover. But it’s invisible. People don’t understand invisible illness. So volunteering for a whole week to get the coveted ticket is a lot harder than anyone could guess.

This review is getting stupidly long, so I am going to move on to my likes and dislikes—I just want you to know my background because it does affect these.

Dara Rosenberg was perfect as the narrator. There were a lot of Jewish (Hebrew) and Yiddish words, but she was perfect and really brought the story to life.

Overall, I really enjoyed The Matzah Ball. At first, I almost DNFd, because it was 3rd person and just a little too Jewish for me, but as the story unfolded I really began to get into it. My favorite thing is how relatable the heroine is. As a debut novel, I think Jean Meltzer did a fabulous job, and I hope to read more mainstream romance novels that feature Jewish characters from her. 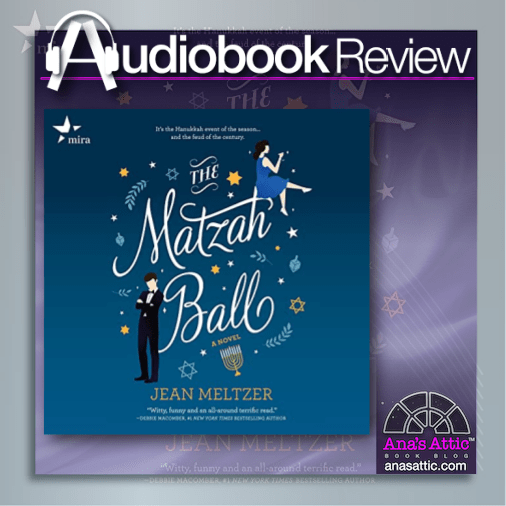