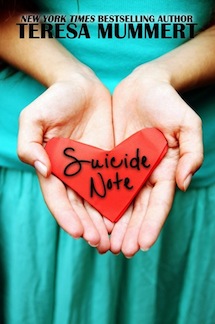 “India Lima Yankee” (I loved this)

To start with, don’t let the name put you off. There is no suicide in this story.

I really enjoyed White Trash Beautiful (see my review) by Teresa Mummert and was very much looking forward to Suicide Note. When she sent it to me as an ARC (Advanced Review Copy) for a fair review I was excited to read it! It came out earlier than expected, so I was already seeing some fabulous reviews, which got me even more excited. So I must say, that it just didn’t quite live up to my expectations. Despite a really great story, I just never got fully sucked in. Maybe I wasn’t in the right frame of mind. Maybe because I just came off such a phenomenal read…but either way, I found myself on facebook and twitter more than usual. I was sucked in at times, and then at others, not so much.

My biggest issue here was that the story was told from both POV, with dates. I found myself continually checking who’s voice I was reading, and sometimes it didn’t even seem to make sense–like the POV switched a bit.

Shane is in the Army. His fiancé  left him and married another guy in their church, all while he was in Iraq (BITCH). She even took his dog. Needless to say, his trust is shot, and he has nobody to return home to on leave.

Jenn just had her boyfriend leave her for her sister (nice) and they are planning on marrying. She is supposed to be excited for her sister, according to her family (who doesn’t even remember her birthday). She has a shit boss, no good friends, and prefers to escape into a book than live her boring life.

“I’m not strong enough to keep all of these feelings bottled up inside of me any longer. I feel like I am going to explode.” ~Jenn

Shane comes home on leave from Iraq but doesn’t want to go home, after all, there is nothing for him to go home to. So he goes to visit his cousin. While there, he meets his cousin’s assistant Jenn, where the inevitable “electricity shot through” her.

“She was gravity. She was the light in the darkest of my days, and her smile ignited a flame inside of me that had gone out a long time ago.”

When Shane reads a letter that makes him think Jenn needs saving, he set out to fix things, but never expected to lose his heart in the process.

“I wanted to hold on to this moment for as long as possible. As hard as I tried to cut off my emotions it was nearly impossible to put up walls around Jenn. I didn’t want to keep her out. I wanted to build those walls around the two of us and protect her from the rest of the world.” ~Shane

And he was so great at protecting her from her asshole family.

“I have your six”

But all throughout their time together, you knew he had to go back to Iraq.

“I have always considered myself to be strong, even when the odds were stacked against me, but I felt like I was only hanging on by a thread. I’d forgotten how to breathe without inhaling the minty smell of his soap. I forgot how to feel without looking into his blue eyes. He awoke something inside of me that I didn’t even know I had locked away.” ~Jenn

This book had a great story. There was very little angst, and very light sex. It actually took more than half the book for them to get together, then he left! I really loved both of the characters, especially Shane, who had some awesome quotes. But I just had such a problem getting into the book, until at least halfway. Then, I was enjoying the friendship, but never really felt the love fully develop. I had issues with following the POV change and found myself going back during almost every chapter to see who’s POV it was.

“I always thought a piece of my heart had been missing. Turns out that piece was you.”

I really really really wanted to love this book. I really like the author and had such huge expectations for this. It was a wonderful story. I still really liked it, but never found myself so anxious to read it that I could get nothing else done. I must point out, that I am in the minority with this. It has 100 5 star ratings on Amazon, but it just didn’t compare to some of the other books I have read recently.

“You were the light when my entire world was dark. You gave me a reason to keep going when all I wanted to do was give up.”