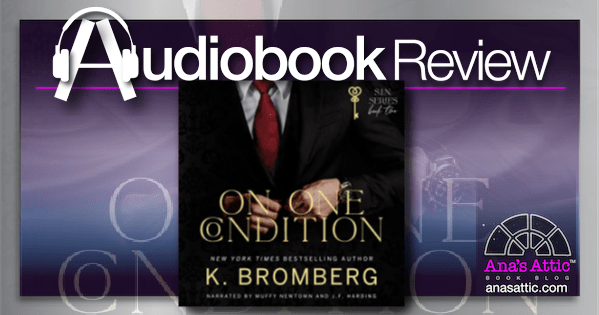 On One Condition: The S.I.N. Series by K. Bromberg

Note: Audiobooks were supplied by the author for an honest review. This post contains affiliate links.

“Ledger Sharpe. A name I’ve never forgotten … even if I wish I could have.”

Ledger Sharpe is the first born of the three triplet brothers who run S.I.N. International. When the boys were growing up, they spent summers in a small town in Montana. Now they are renovating a resort in the same town.

The mayor of Cedar Falls won’t give them a Certificate of Occupancy until one of the brothers spends at least 60 days there to get a feel for the small town. Ledger is the chosen brother. Only he didn’t expect to see the girl who broke his heart as a teenager on his first day in town.

Asher Wells has had a rough time in the 15 years since Ledger Sharpe broke her heart. She gave up all of her dreams to run her grandparent’s lavender farm in the town that has always looked down on her.

The chemistry is still there between ledger and Asher, but so is the hurt.

“Her anger is bitter. Her desire is sweet. Both riot against my tongue as my head swims with the taste of Asher Wells.”

I enjoyed On One Condition from start to finish. Is it anything that stands out as especially unique? No. But it kept me listening well into the night and rooting for Ledger and Asher’s second chance.

Muffy Newtown and JF Harding were amazing in this and definitely added to the drama and feelings On One Condition created. I highly recommend the audio version!

Though On One Condition is the second in the series, it stands alone easily. It gripped me from the very first pages, to the point that I had to force myself to stop listening and try the first book in the series, Last Resort, again (I am so glad I did, but it wasn’t necessary for this book). This second-chance romance ticked all of my boxes and I listened in one sitting. which never really happens. Though On One Condition is a little tropey, something about the way K. Bromberg writes makes her books stand out a little more amongst authors using the same tropes. I highly recommend this one—but warning: block out some time, you’ll have a hard time putting it down. I can’t wait for Ford’s book!

Purchase On One Condition by K. Bromberg 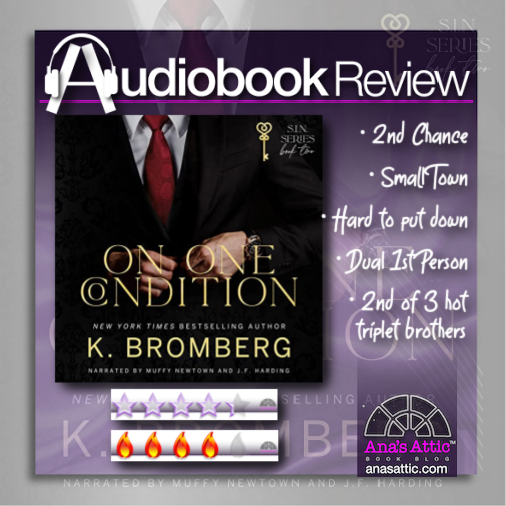