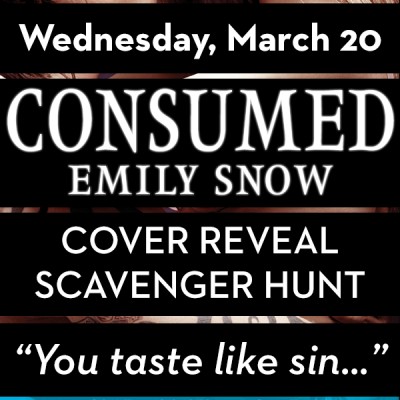 Consumed is the third in the Devoured Series by Emily Snow. Along with seven other bloggers, I’m helping Emily Snow and her publisher Touchstone unveil the cover to CONSUMED, the hotly anticipated sequel to DEVOURED that will be coming out in July! Each blogger is going to post one of eight pieces of the cover at a specific time today, Wed. March 20. The first person to put together the image and post it to Emily’s Facebook page (http://www.facebook.com/pages/Emily-Snow/363370467075260) will win a $50 AmEx gift card AND a copy of CONSUMED in paperback as soon as it’s ready!

This is a great series about a hot, dominant, tattooed rock star, my favorite kind. Devoured came out first, then a prequel, All Over You came out. While the prequel is meant to be read second, I like it better first, though it may ruin a little of the anticipation. I don’t think it matters either way. 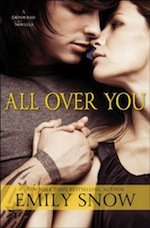 Before Sienna was devoured, before Lucas was consumed, they were all over each other . . .

Lucas Wolfe is used to getting what he wants—from everyone but one person, that is—so when he meets the wardrobe assistant hired to work his band’s newest video, he’s got to have her. From the moment Sienna first obediently whispers “Yes, Mr. Wolfe”, he knows she’s perfect for him.

And he’ll have her stripped down and bound to his bed.

Set two years before the events of DEVOURED, ALL OVER YOU is the story of Sienna and Lucas’s first encounter.

See My Review of All Over You Here.

Purchase All Over You at: Amazon | BN.com 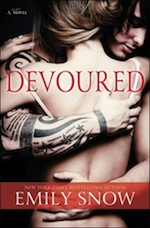 Sienna Jensen had no plans to return home when she graduated college last spring—after all, her dreams lie in California. But when she discovers her grandmother’s Nashville home has been foreclosed, and the new owner has started the eviction process, Sienna has no other choice but go back to Music City. And she comes face to face with the flawed, gorgeous man she never thought she’d see again. The man who now holds the deed to her grandma’s estate.

When millionaire rock star Lucas Wolfe finds the outspoken redhead glaring at him from across a courtroom, he’s both infuriated and intrigued. He still can’t get the night Sienna almost spent with him out of his mind, and the chemistry between them is as undeniable as it was two years ago. He craves Sienna more than ever. And just like everything Lucas hungers for, he’s determined to have her.

Now, Lucas will do whatever it takes to lure Sienna into his bed, even if that means making a deal with her: ten days with him, playing by his rules, and he’ll hand over the deed to her grandmother’s home. Though she agrees to the arrangement, Sienna is conflicted. Because of her duty to her family. Because of promises she’s made to herself and a past that still haunts her. And as Lucas’s game of seduction continues, and Sienna is introduced to his dark, erotic world and even darker background, she realizes that at any moment, she could be devoured.

So, without further ado, here is the piece of the puzzle you are all looking for!

Here’s the fourth of eight pieces—to get the next piece of the cover,  go to  www.flirtyanddirtybookblog.com at 2 pm EST. 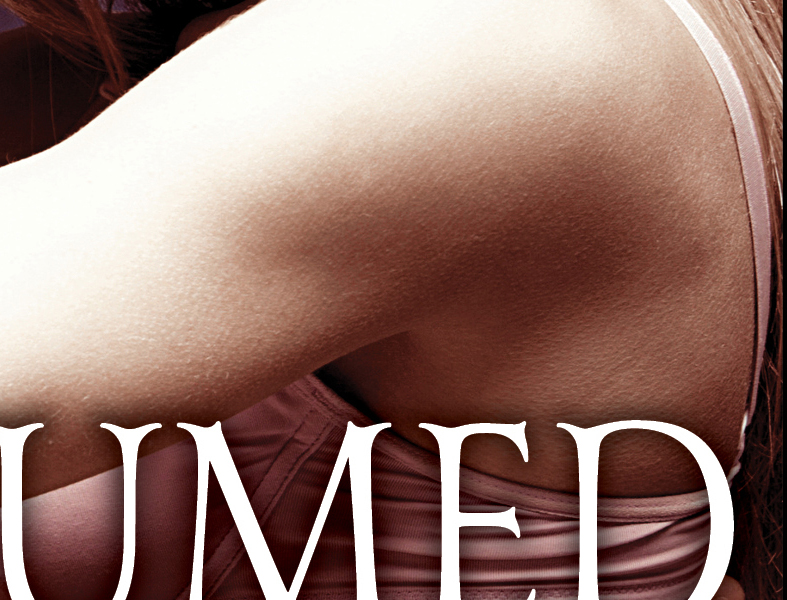 CONSUMED is available for pre-order now!

Remember: The first person to put together the image and post it to Emily’s Facebook page (http://www.facebook.com/pages/Emily-Snow/363370467075260) will win a $50 AmEx gift card AND a copy of CONSUMED in paperback as soon as it’s ready!

And here’s a complete list of the blogs and when the piece will be available  (all times are EST):

11 am: Three Chicks and Their Books – www.threechicksandtheirbooks.com

UPDATE!!! Here is the new cover: 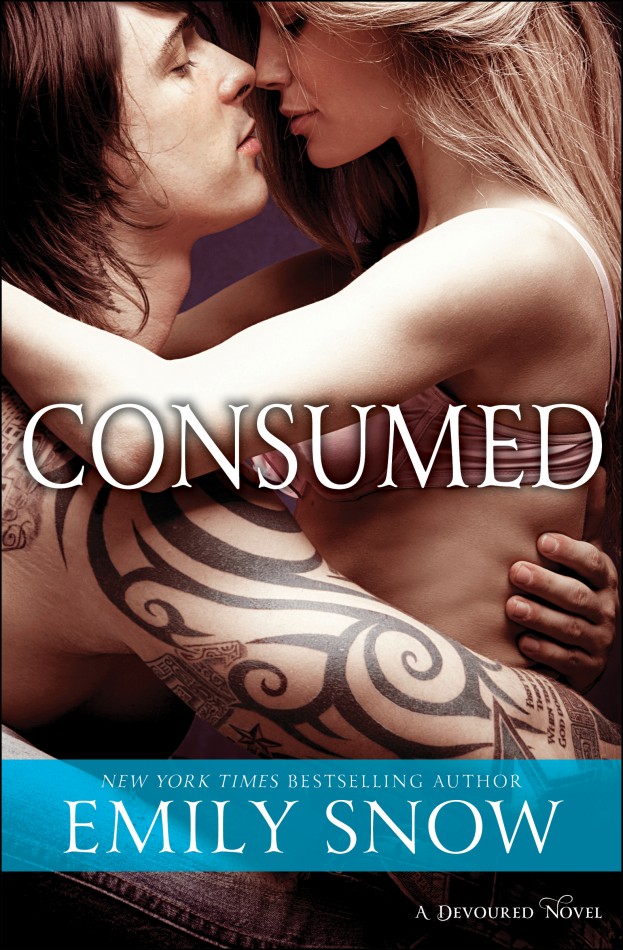