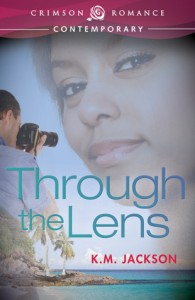 Through the Lens by K.M. Jackson was a unique tropical love story that satisfied till the end. The author sent me this book upon my request in exchange for a fair review.

Alejandro Vargas is a hot, very well known high fashion photographer, and Mika (great name) has been his very competent assistant for the last 3 years. In fact, Alejandro can’t function without her. But Mika is an extremely talented photographer in her own right, and has secured her own job at a top magazine. She just has to tell her boss and long time crush, Alejandro (Ale).

They arrive at an almost deserted tropical island for a photo shoot, and due to a scheduling snafu, the rest of the crew won’t arrive for 3 days. Mika and Ale decide to scout out locations on the romantic, practically deserted island, and Ale begins to realize that Mika has some feelings for him. As he finally allows himself to open those doors and let his own feeling out, he finds he has an uphill battle with Mika.

Mika is a normal sized girl, (she is black, but that is only hinted at in descriptions of her beautiful skin), and she knows Ale is a playboy with his gorgeous high fashion models. In fact, she is the one who usually packs condoms in his bag for him. But being caught in such a romantic place, and knowing this is their last shoot together, Mika decides to let go and give into temptation.

And give in they do. Against a tree, in a cave behind a waterfall, and in one of those gorgeous stilt huts. Mika refuses to let her heart get involved (though it always has been) and decides to end it as soon as the skinny, perfect models (especially the one after Ale) show up. But Ale doesn’t know how to convince her he wants more. He comes from a background of thinking all women just want him as a stepping stone, like his mom did to his dad.

From the beautiful descriptive island scenes, to the high fashion world in New York, this was a great romantic escapist read.

This was a great debut novel. It had romance, the world of high fashion, beautiful descriptions of the tropical location and a great end. I couldn’t go up to 4 stars because I wasn’t willing to neglect everything else to read it, but still enjoyed it. I would have liked to know a little more about the character’s backgrounds, but I would absolutely read more from this author.

Purchase Through The Lens at Amazon || BN.com/nook || iBooks