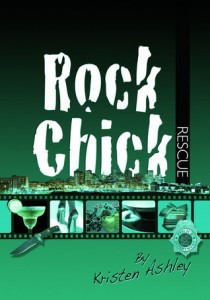 Rock Chick Rescue, the second in the Rock Chick series by Kristen Ashley (see reading order here) is just what I needed to get me out if a reading slump. Her books never fail. I sat there with a stupid grin on my face the whole way through. I laughed, I sighed, I gasped, I teared up and I had fun. What else do you need in a book? Oh yeah, hot sexy alpha men? We have that in spades!

This book brings back all of the crazy characters in the first book, lets us get to know them all better, and fall in pre-love with all the guys in future Rock Chick books. While this series is a little less hot alpha romance and a little more Rock Chick fun than Kristen’s other series, I’m enjoying the books more as I read.
.
Jet Mcallister (how fucking cool is that name?) is named after the Paul McCartney and Wings song. Both of my kids are named after either a Beatle or a Beatles song, so I really love this. She works at Fortnums with the rest of the crazy gang during the day, and waitresses at night at Smithies, the local titty bar for extra cash to take care of her disabled mom.  Jet thinks of herself as boring Plain Jane and is horribly shy around handsome men, especially Eddie Chavez, the gorgeous cop and one of Lee’s best friends, who keeps coming in to Fortnums to see Jet and get coffee.
.
Jet’s loveable but deadbeat dad left when she was a kid, her mom fell apart, then got sick. She took care of everything, including letting her little sister take off to LA to make it as a model. Jet’s lack of self esteem keeps her from realizing how many people care about her. Her life is all about working and taking care of everyone else. Until the shit hits the fan.
.
Jett’s deadbeat dad shows up in town owing money to the wrong people and Jet gets herself involved. With the help of Indy, Ally, Tod, Tex, and newcomer Daisy (a Dolly Parton look alike), there was no way the problems wouldn’t get worse, but in a crazy, wild fun way. And if Indy and Ally are involved, of course Lee’s guys are around too.
.
Meanwhile, Eddie sees Jet is in trouble, and realizes its finally time to make his move.
.

“Since I’m bein’ honest with you Chiquita, I’ll tell you I usually play with what I want until I feel the time is right to move in. The time was right with you a long time ago but you’ve been so focused on your own shit, you gave me no opening. This hasn’t been fast. You want to see fast, we’ll go into the bedroom and I’ll show you fast, but I’ll show it to you slow.”
.

Jet thinks Eddie is out of her league, and is only into her because her life is currently exciting. She thinks once she goes back to her boring life, Eddie will be gone. What she doesn’t realize, is Eddie, and all of the gorgeous guys in Denver are into her, including Mace (sigh) and Hank. But she has had a crush on Eddie for a while.
.

“Next thing I knew, my nipples were tingling, my doo-da was quivering, I was kissing him back and my legs hit the bed.”
.

This is where the perv in me wanted a lot more. Though we have some good detail, the scenes are quick. But I knew this going in. The Rock Chick series itself is more chick-lit romance than straight out dirty alpha romance. But they are fun, and I’m excited to read more about the rest of the ‘Justice League’ including Hank, Darius, Mace, and maybe learn more about the other characters as well (especially Tex- love him).
.
Likes:
Dislikes:
Rating: 4.5 stars. 3.75 for Heat

The first half of this book was a full on 5 star read for me. It had everything, funny stuff, sexy-ass alphas, great girls, a possessive, protective, forceful alpha hero, a likable heroine, action and adventure. But they never developed into the full-on love that I like in a Kristen Ashley book, and was missing the epilogue. It just kind of ended at a strange spot. I hope the next in the series makes up for that.
.
I will be reading the books in the series between darker, more angsty reads, because revisiting the gang every few weeks seems like more fun than running through them all so quick. I know I have the next to look forward to for a while 🙂
.
Purchase Rock Chick Rescue at: Amazon || BN.com (nook) || iBooks
.