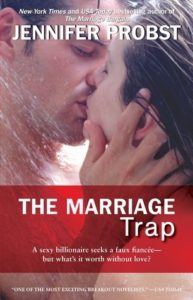 The Marriage Trap by Jennifer Probst is the second in the Marriage To A Billionaire Series. The first was the sweet, but forgettable The Marriage Bargain (see my review here). I enjoyed the first book a lot, I just felt there was nothing unique about it. I enjoyed this one a bit more because it took place mostly in Italy, with an old fashioned Italian family. This is a sweet, fun, fairytale-like traditional romance novel.

Maggie is Nick’s little sister and Alexa’s best friend (Nick and Alexa are the couple from the first book, but are barely in this. It can be read alone). Michael Conte is one of Nick’s best friends and is working on bringing his family’s bakery empire from Italy to America in Nick’s waterfront project. Michael has become so close to Nick and Alexa that Maggie thinks he is secretly in love with Alexa and is going to tear up their marriage. Maggie also seems to dislike him because they went on a blind date the year before, and he rejected her after.

Michael is Italian through and through. From a big Italian family, Michael swore on his Papa’s death bed that he would take over the family business and take care of his mama and sisters. He takes this responsibility very seriously. His younger sister is in love, and wants to marry. But some old family tradition says that she may not marry until the eldest son marries, and her mother promises to disown her if she marries first. Michael, always being the one to solve the family problems, promises he has a wife so his sister can marry and be happy.

Maggie is a fashion photographer, but not just any fashion, men’s designer underwear! (Where can I sign up for that job?). She is scheduled to go to Milan the following week anyway, so Michael jumps at the chance to get her to pose as his fake wife for his mama’s sake. He knows she dislikes him enough that she wouldn’t expect more. He promises to stay away from Nick and Alexa if she helps him out.

“The whole crazy plan hit her full force as soon as his private plane shot into the air. What the hell had she agreed to? And what was it about the Ryan family that necessitated fake marriages?”

Maggie grew up wanting for nothing, except love. Her parents had money, but she was given no love or affection, and had no extended family. So coming into Michael’s big, loud, boisterous Italian family was a big shock to her. Usually uptight and distant, Maggie was pulled right into the family drama, and while part of her liked it, part of her was completely freaked out.

The attraction between them was undeniable. Michael was smokin’ hot, and had every quality Maggie secretly wanted in a man. But she never learned to accept or show love, so she was a tough wall to break down.

I really enjoyed the story. I read it in one day. I have to say, it was a ridiculous, overused plot, but done a bit differently, and done well. It was a fun, sweet, fluffy read that you knew would end happily. Sometimes I like the sweet fairytales, and this one worked well for me.

“Oh , my God, this is insane. How is this happening? I’m trapped in a frickin’ romance novel!”

Ha! Well at least the characters knew it! lol. I will absolutely read the third in the series about the innocent Carina and Max, The Marriage Mistake, coming November 6th.