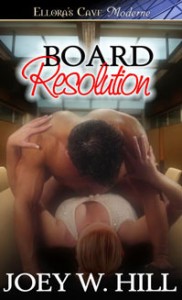 I grabbed Board Resolution by Joey W Hill because it was recommended for a good fit on this blog, had some great ratings by people I trust, and it was free at the time. I was asked to put op the Knights of the Boardroom Series reading order and when I read the description, holy hell, it sounded too yummy not to read. I mean, 5 Doms and little old Savannah? Fuck yeah!

Savannah is a buttoned up corporate executive 35, beautiful, and still a virgin (WTF? Seriously?) She has been groomed since childhood to take the reins at her widowed father’s company, which happened 2 years prior upon his death. Her father’s rules for the corporate life have been ingrained in her, mostly rules about not backing down and never showing emotion which earned her the nickname of Cyborg Savannah.

But Matt and his 4 sidekicks see more. Matt is the head of another company that has very close dealings with Savannah’s. He decides to set a meeting for 8:00pm on a Friday. What follows is a pretty hot scenario that can be construed as non-consensual, but I don’t think so. Savannah had such strong walls up, Matt had to do something really drastic to break down those walls, but saying it was overkill would be a MAJOR understatement.

Savannah was “kind of” given a choice. Surrender her will (she is tough as nails, he knows she would never) or suffer the consequences. What are the consequences? Oh poor baby….Matt and his 4 right hand (haha) men hook her into some crazy contraption that lifts and suspends her above the conference table. This thing was custom built just for her, it is run by remote and is on tracks in the ceiling. So Matt sends his guys to work.

“You can play with her in as many and varied ways as you wish that will give her pleasure, but you can’t fuck her pussy. Understood? And if you touch her, you have to make her come” – Matt

I volunteer!!! Mind you, Savannah has never even played with herself (oh please, she is 35! maybe she needs to visit my Red Room of Pain), but all she had to do was drop a hanky for it to stop. But she is blindfolded, gagged, strung up over a table with spotlights and cameras on it, and Matt is saying they all love her and won’t hurt her. Then the 4 take their turns–they each have a “specialty”. One is into oral, one had a custom built vibe that he used, one was into her boobs, and one her ass. And they plan on torturing her until she completely surrenders to Matt.

OK then, that is a lovely, romantic way to declare your love, don’t you think? Especially for a woman with no sexual experience? But, she seemed to enjoy herself after some initial tears and wishing it would end.

There are a few reasons I couldn’t connect to this. It was told in 3rd person, in an almost detached, narrated way. Also, the story started with the crazy sex, and then she had some thoughts and flashbacks which explained their relationship a bit. Those flashbacks were the best part. They let me see the build up, my favorite part of any love story. But there were way too few flashbacks.