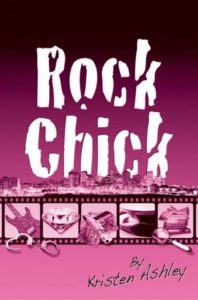 I think I have made it clear in the past that Kristen Ashley is my favorite author. She not only writes a great story, she has written 34 of them so far. 34!!!!! And they are all long and full of goodness. (See my post Kristen Ashley Writes Cracktastic Books!). I think the Rock Chick series is her first, because I know many of the characters from this series show up in  her other series. I put this series off for a few reasons, the largest being that I want to save it for a book slump. Her books never fail to pull me out of one. Also, because this series, from what I read, was a little less sexy than The Colorado Mountain Series, The Burg Series or The Dream Man Series, but even more fun.

Rock Chick was just that. Not that there is anything wrong with that, but I love the Kristen Ashley sex! Luckily, this had another über Alpha male, Lee Nightingale. I have heard his name mentioned in many other books, so I’m glad I finally got to meet him and fall in love with him.

Indy Savage is a Rock Chick. She loves her classic rock (she has AWESOME taste in music), she dresses in Denver rock-and-roll style (which includes cowboy boots, great belts, and band shirts pretty often) and her father is a cop. She lost her mom when she was five years old, and spent most of her time growing up with her mom’s best friend’s family, the Nightingales. Ally Nightingale is Indy’s best friend, and her brother Liam (Lee) owns his own badass security company. Ally’s other brother is a cop, so lets just say, the cops all know these two girls, and look out for them. Indy fell in love with Lee when she was 5 years old and threw herself at him in every way possible until she was 17, when he told her he only liked her as a sister. For the next 10 years, she avoided being alone with him.

Indy inherited her Gram’s used bookstore. Her crazy pothead Barista, Rosie got in a load of trouble with stolen diamonds, and Indy became the target of a crazy bad-guy’s obsession. Rosie disappears and Indy needs Lee’s help.

“I do this thing for Rosie, you sleep with me”
I stared at him, open-mouthed and in stunned silence.
I did, of course, understand what he meant but he explained further.
“Not like last night, we’ll both be naked and sexual acts will be performed.”
My expression didn’t change except maybe my mouth opened wider.
“I’ll expect your participation.”
Holy shit.
“Your avid participation.”
Dear Lord in Heaven.
Eventually, I whispered, “You must be joking.”
He shook his head and watched me.
I dropped my eyes, unable to hold his stare.
“I think I need more coffee,” I told his throat.”

Immediately Lee lets everyone know they are together, before Indy even has a chance to breathe. So much was going on with the diamonds and missing people, that whenever Lee and Indy try to go at it, they are interrupted (this got a little frustrating for the characters, and for me). All of her friends want to know what the gorgeous badass Lee is like in bed, but Indy says they’re taking it slow.

Not only was this a romance, but it was a completely zany romp with 3 kidnappings and a cast of crazy characters, the craziest of which was Indy and Ally! Best friends since birth, even their moms were best friends. They always wanted their kids to get together and get married so they would be related for real, so everyone knew it was inevitable, and everyone was thrilled. I loved the fact that they had known each other all of their lives. It made their getting together so quickly work really well.

“Your grandmother used to say that you were two souls separated in heaven. She mainly meant you were both trouble and deserved each other.”

Indy is independent, feisty, totally nuts, and a flirt. Lee is a perfect Kristen Ashley alpha. Gorgeous, scary, possessive, jealous and protective. Put that combination together, and it’s bound to get a little nuts.

“Maybe we should have this conversation in an alternate universe where Alternate Indy gives a shit what Alternate Lee wants her to wear.”

“If it’s just you sharing your feelings, perhaps you can voice it less like an order,” I suggested.
“I’m used to giving orders and if it sounds like one then there’s always a chance you’ll obey.”

When they finally do the deed though, they do it right:

“Jesus,” he buried his face in my neck. “There’s nothin’ better in the world than hearing you say my name when I’m inside you.” He slid in deeper, filling me. “I’ve been waiting years to be right here.”

There were a ton of really funny lines in this book, and so much I can relate to.  Retail therapy with Auntie Annes pretzels, using the word ‘boobage’ to describe someone else’s chest, a big food fight against the bitch named Candie and more. I had a lot of fun reading this book. It reminded me a lot of Janet Evanovich’s Stephanie Plum series, if she finally picked Ranger.

This book was a little more chick-lit than romance to me. I still totally loved it, but it is not my favorite KA book. It was fun, crazy, a wild ride, had a ton of action, and a great life-long romance. I laughed, I cried a little and I swooned. But I still like a little more of the romance in my stories.
As always though, from what I have read, the series gets better as you read more. I find that to be the case with every Kristen Ashley series I have read. They just keep getting better. I can’t wait to read the next in this series.
.
Purchase Rock Chick by Kristen Ashley: Amazon || BN.com (nook) || iBooks
.
Rock Chick by Kristen Ashley Reading Order
.
Related Posts: