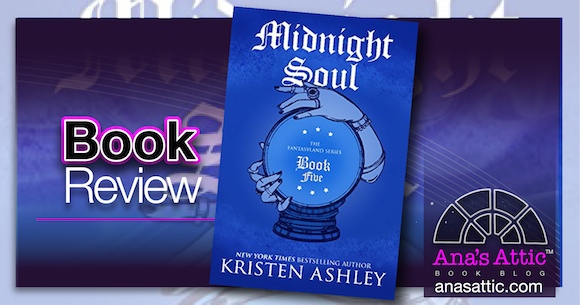 Fantasy romance, Series finale. Though they each feature a different couple, the series should be read in order.

Because I struggled a bit with the fourth book in the Fantasyland Series, Broken Dove, I decided to re-read the entire series before reading Midnight Soul by Kristen Ashley. So much happened in Broken Dove, and so many characters came together, including several who have twins with the same name, that I was a bit overwhelmed and felt I needed a refresher. I am so glad I re-read! The first two in the series, Wildest Dreams and The Golden Dynasty are both all-time favorites. I listened to them both on audible as a re-read and loved them even more via audible. The rest of the series isn’t on audible till 10/25/16 so I quickly re-read, and honestly loved them all a bit more the second time. There are so many amazing details, that the re-read was even more special.

Broken Dove was a huge, all-encompassing climax, so it was tough to imagine where Kristen would take the next in the series, and I’m pleased that Midnight Soul was more character than danger driven. Frankly, I hated Franka Drakkar in previous books. Pretty much everyone hated her. Though she never did anything completely unforgivable, she was just mean and catty. In Midnight Soul, we learn the reasons behind the bitchiness, and it’s hard for anyone not to forgive her

“You are not one fuckin’ thing like they think you are, are you?”
“I’m exactly what they think I am.”

Noc is from our world. He is a Kristen Ashley alpha through and through. He’s a protective, alpha cop who won’t take no for an answer. He speaks Kristen Ashley alpha-speak, with every other word being slang, while Franka speaks very formal English. reading her reactions to his words were funny, especially his insistence at calling her “Frannie”. While Noc may be a KA alpha, he knew he had to take his time. Franka just lost her lover and had another traumatic event happen. Their relationship took some time to develop, and I loved that.

Franka knew who she was. Her bitchiness was such an ingrained defense mechanism that while I enjoyed her change in the book, I felt it was a little too much of a 180 without any slip-ups or regression to past behavior. Luckily Noc was able to bring the best out of her.

“You say my light shines on your soul, do you think for one second you’d be in my bed right now if your light didn’t warm mine?”

This book was very different from the first four, in that most of it took place in our world since Noc had a home in NOLA (as did Circe from the other world and Valentine). It was so much fun reading the reactions of Franka and her BFF/maidservant Josette to this world’s luxuries like toilets, cars and PIZZA!

“My word, Franka, have we arrived in the lap of the gods?”
“No, babe. It’s just the Nordstrom shoe department.”

Midnight Soul was long. While I love a long KA book, without the action and excitement it did feel a bit too long, especially because there were two, even three underdeveloped side romances. But the one that intrigued me the most was with Lahn from this world and Circe from the other. In fact, I think I would have preferred them being the main couple with Franka and Noc the secondary. But alas, we read more of a secondhand account of this budding relationship. I wish we could have experienced it more.

As always, Kristen Ashley had an amazing epilogue both for the book and the series, but because the book itself read so much like an extended epilogue, it took away a little from the real epilogue. 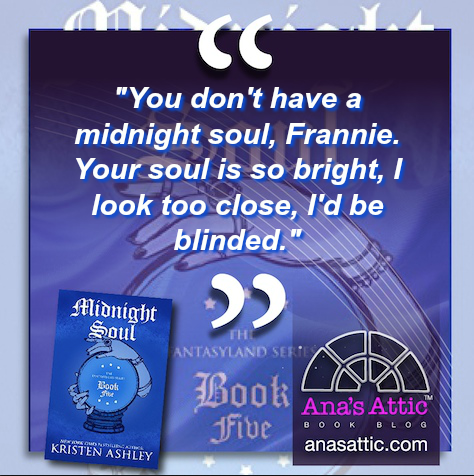 While Midnight Soul isn’t my favorite of the Fantasyland series, I still loved the crap out of it. It is different from all the previous ones, as it is more relationship driven with very little action. It takes place mostly in our world, which was a ton of fun seeing the other world Franka and Josette adjust to. Though I loved Franka’s change, I felt it was a bit too extreme. There were a few side stories that intrigued me as much, if not more than the main one, and I wish we could have had them develop more, so I am going to hold out hope for a novella. I found that though I took over a week to finish Midnight Soul, I still finished with tears running down my face and hugging my kindle, completely devastated the series is over. 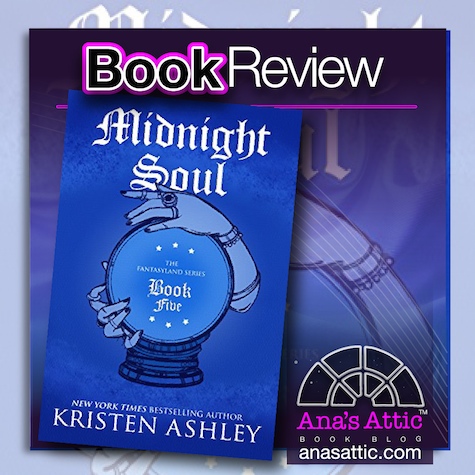