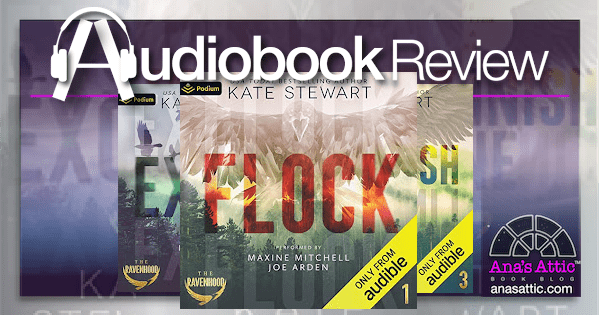 The Ravenhood by Kate Stewart

Though Kate Stewart does not write my usual lighter romance, several of her angsty romances have ended up being some of my favorites. Kate is also someone who I personally love. I started Flock a couple of times before the audiobook came out, but I just couldn’t get into it. But that was happening with a lot of books at the time—the pandemic really made it difficult to concentrate on reading.

So I waited for all the audiobooks to release, and I set myself up for a Ravenhood marathon. People are OBSESSED with this series! I had to know what they all love so much. So I settled into listening to this over 40-hour audiobook series.

I have to be honest. It felt like 40 hours. I’m not going to talk about the plot, because honestly, I’m not really sure what the plot is. The first book, Flock, was a little slow, but it kept me interested. I had no clue what was going on, but neither did Cecelia, the heroine. While staying at her estranged father’s house, she gets mixed up with a “gang” who all have Raven tattoos. But it’s a huge secret and never explained what the purpose of the group is—we just know it isn’t legal, though it may be done for the right reasons.

All the secrecy and cryptic information drove me a little crazy, and I’ll be honest, I always felt ready to DNF, but since I already bought the whole series, I love Kate, and it has so many amazing reviews, I forged on.

“I loved the bastard I met, the thief that stole me, and the king who claimed me, but I refuse to love the coward. I hate the coward.”

I found Cecelia to be needy and whiny and the type of girl who gravitates towards the most toxic relationship she can find. I think maybe I’m too old to read about such toxicity.

40 hours is looooooong. This trilogy is over 1300 pages, but if I read it it would have been faster because there was so much French. Listening to the book, you have to listen to the full French sentence, then the English translation. If I read it, my eyes would just skip the French. But that was the final straw that made the books really drag for me.

Maxine Mitchell and Joe Arden were INCREDIBLE narrators. But I’m not sure I can recommend the audio because of all the french you have to listen to—my mind would wander during that and it wouldn’t always come right back.

The Ravenhood Trilogy has a HUGE fan base. People are obsessed with it. I liked it just enough to listen to all 3 without DNFing. There was a lot of emotion, and Kate can make you FEEL, but this trilogy was not for me. The one character I loved from book one was gone the rest of the series, and I never fully bonded with any other character. It was so long, and there was a lot of French, and I’m still not sure I understand everything that happened in the series.

These three books could have easily condensed to two (I know it was originally two, but I think a lot of book one can be cut.) I spoke to a number of friends about this series. They were very divided. Several said it was the best they read all year, and a couple said they couldn’t get through it. There doesn’t seem to be a lot in between. The Amazon reviews are fabulous though, so it seems I’m in the minority.  Still, I will grab the next book Kate releases, because that woman knows how to tell a story. Hopefully the next wont be as toxic and convoluted. 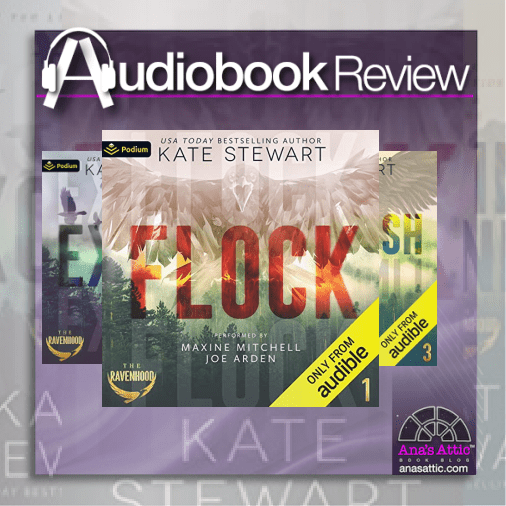