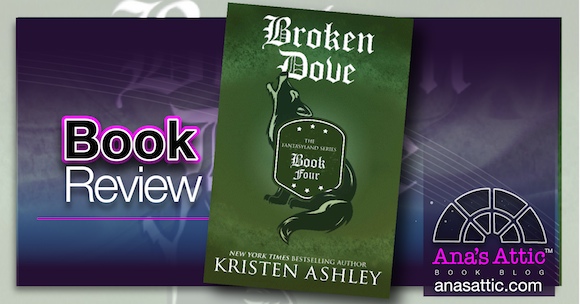 I waited so long to read it because I didn’t think I’d love fantasy, but it turns out that The Fantasyland Series by Kristen Ashley is one of my top favorite series. Oh who am I kidding? All of Kristen Ashley’s are my favorites. These are the first fantasy books I have read, and they are a great change of pace! Broken Dove is the fourth in the series, I went in right from Fantastical, and perhaps maybe it was just too much. Overload. Because I found myself a little bored and confused at times, which has NEVER happened in a KA book.

Don’t get me wrong. I still loved most of it, but it was not my favorite by any means. Except the sex. That was hot and dirty! Just the way I like it ;-)~

Apollo Ulfr is a heartbroken widower with two young kids. He lives in the Fantasyland world, and once he found out that they all have twins in our world, Apollo wants his wife’s twin, Ilsa, brought to him.

The Ilsa of our world is on the run for three years from her husband. Her Apollo (“Pol”) is an evil, heartless man that liked to use Ilsa as a punching bag. He has found her though, so the Apollo from the other world needs to act fast, or it may be too late.

“Apparently being pistol whipped made you hallucinate. But there it was. The vision before me was Pol in a dude-from-a-romance-novel-cover outfit hammering the normal Pol with his fists.”

She is then transported to the other world. But Apollo is not prepared to see his wife’s duplicate in looks, but not at all in personality. And it’s not easy for Ilsa to look at him with anything other than fear. He has the face of the man who terrorized her.

“Be careful what you wish for. You might get it. And not want it.”

So “Lo” takes off and spends months away at another home with his kids, while Ilsa began winning over and making great friends with his men. They even renamed her Maddie so people would think she was a distant relative. The guys, especially one, were so nice to her and the whole situation for Apollo and Ilsa is so awkward, and Apollo was a dick, so I actually kind of rooted for her to fall for one of his men instead of him. I mean, even if it did work out, how can she not always feel like a poor replacement of his dead wife? But once Apollo sees that Ilsa is worth loving on her own, and that she is totally different than his Ilsa, things start to warm up.

“This is going very fast,” I reiterated.
“Yes,” he agreed, not letting go of my hand or my gaze.
“It’s scary.”
“Yes,” he agreed again and I watched in fascination as his beautiful jade eyes turned hard and determined. “And this, my poppy, will be the last thing on this world or any other that you fear.”

There was a LOT going on in this book. All 4 couples got together, the witches and all the bad guys were in it, and I found it very overwhelming and difficult to follow at times. There was a lot of excitement and adventure, and I loved seeing the other couples, especially Lahn. But I must admit, seeing them again made me realize that Apollo and Ilsa just didn’t have the magic that the other three had. The sex though, was off the charts.

“Then his hand cracked against my ass.
Oh God. God, God, God.
Yes.
My hips jerked, my ass stung, my body fucking burned.
“Touch yourself.”

My heart broke for Apollo’s son, who was old enough to remember his mom, and here is his dad falling for her exact replica.

Apollo is not quite as deliciously alpha as Kristen Ashley’s men are, don’t get me wrong, he is, but I just didn’t fall in love with him (though damn, I wouldn’t mind sleeping with him! YUM). And Ilsa was broken, so she was a bit more passive than some of her other heroines. She had some spunk, and she made everyone she met fall for her, but I found her a little meeker than the rest, but believe me, she will still grab that sword and kill!

“A dove has great beauty, but is easy broken.”

Ilsa had never really had any happiness in her life, so even though curses and bad guys and witches abound, the Fantasyland world is still infinitely better for Ilsa.

“Just so you know, honey, if your intention is giving me better… you’re succeeding.”

And Apollo (“Lo”) picks up her pieces.

“So this is what it feels like not to be broken.” 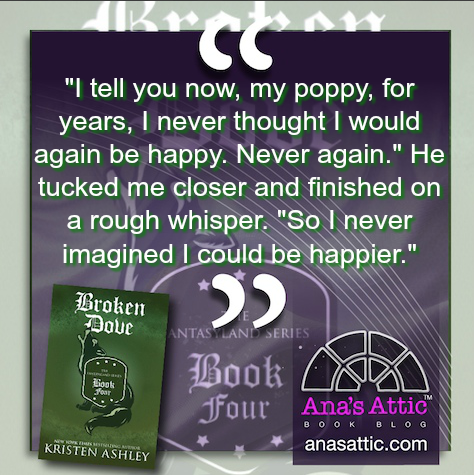 While Broken Dove is not my favorite in the Fantasyland series, I still thoroughly enjoyed the read. I think I would have enjoyed it more if I hadn’t just finished Fantastical because the visits with the other couples would have felt more like visiting long-lost friends. This situation was made especially difficult because the heroine was brought in to replace the hero’s dead wife. There were a lot of outside storylines that became a bit overwhelming and difficult to follow and I wanted a bit more of the couple bonding. But all in all, I still loved being back in Fantasyland so much, and despite having several dislikes, I still enjoyed every second of the read, and can’t wait for Noc’s book, Midnight Soul. 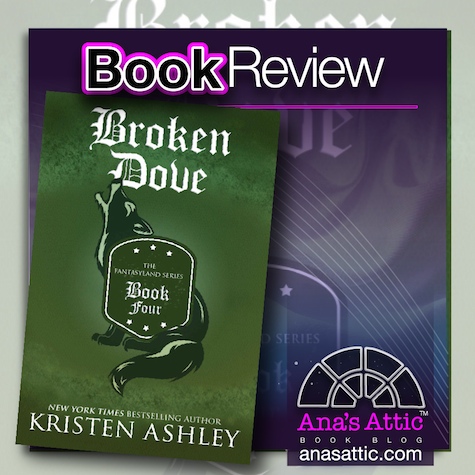