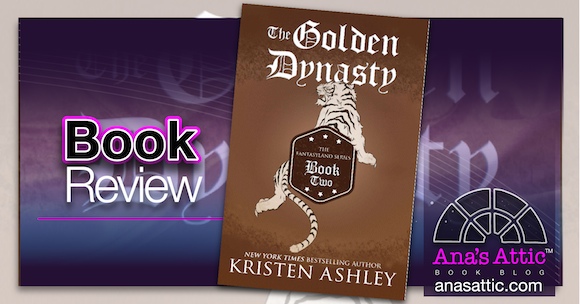 The Golden Dynasty by Kristen Ashley

I finished The Golden Dynasty by Kristen Ashley (Fantasyland 2) like two weeks ago but struggle with this review, because how do you review a book you love so much without gushing so much you slobber everywhere? How do you do it justice? I haven’t stopped thinking about it and I keep looking for a break in my reading schedule to get back into this amazing fantasy world Kristen has created.

There were so many things in this book that are things that I honestly would never want to read in a book, yet it has become an all time favorite. I know, I know…I pretty much say almost the same thing after every Kristen Ashley book. Why? Her characters. They are people you absolutely can’t help but love. The rich details that suck you in and make you feel like you are right there, and the way I swoon at every Kristen Ashley hero. But The Golden Dynasty stands out as one of my favorites of my favorites!

I have asked Kristen who her favorite couple or character is, and she can’t answer, because it’s whoever she is writing at the time. I feel the same about her books. The Golden Dynasty, book 2 in the Fantasyland Series was so different and so unique, yet it had all of the things I love about a KA book – A strong swoony alpha who starts as an alphahole, a lovable heroine, great side characters, rich, detailed descriptions and a love you never, ever doubt.

The Golden Dynasty has some major triggers for some because it includes violence towards women and rape. It is about a primitive, savage culture who, for them, this is the norm. But it is handled in a wonderful way by Kristen, and I’d expect no less from her. **Note: The rape scenes are mostly fade to black. This book is very often compared to Game of Thrones. I cannot confirm or deny because that never appealed to me. I usually don’t like fantasy or historical, and The Golden Dynasty is kind of both. But now I’m thinking Game of Thrones may be worth a try.

Circe is from Seattle, our time. She goes to sleep one night, and next thing you know, she wakes up in a corral, half naked, with women who don’t speak her language, being paraded for a bunch of savage warriors about to begin “the wife hunt”. Eeek!

This is the way of the Korwahk people. They round up the most beautiful women. Many willing and excited, but others kidnapped for their beauty. They let them loose to run and the warriors hunt them down on horses and “claim their bride” by basically raping them. Circe is very different than the women in all of the previous hunts. She is light to the Korwahk’s dark, with golden hair and eyes. And she is the first to catch the Dax’s (King’s) attention.

“I went to bed in my bed in a world I understood and I woke up here in a world that was entirely foreign to me, everything about it, and not one thing about it was good. And now I was running for my life.”

Quick moving and exciting, The Golden Dynasty sucked me in and had me riveted from page one. Dax Lahn is totally the lesser of two evils, and I was glad she was caught by him. But he isn’t really evil. It’s just the way of his people. Savage. To him, Circe is his “Golden Queen” the queen of the legends. And right away we know that he is a good king to his people and plans to be good to his Golden Queen.

“There are some men, no matter what blood flows in their veins or what teachings were drilled into their heads, who are just good men.”

Dax Lahn is smart, he speaks many languages of the land. Though they are on the same world as the characters in Wildest Dreams, they are in a very different area. They are a nomadic tribe, with slaves who set up a full town of tents every few weeks. There are no bathrooms or any modern conveniences, but as Circe says, there are some majorly kick-ass clothes. This is what I loved about her. She was strong, feisty, and made the best of any situation she was in.

“If you’re given the opportunity to look deep enough, you can see a person’s spirit in their eyes but usually, they are guarded, kept safe. Not you, my tigress, the night of your claiming, even in the moonlight, I could see your spirit shining from your eyes. You hold your spirit close to the surface for all to behold and it is the most beautiful thing I have ever seen.”

Circe stepped into the Queen role beautifully despite not knowing the language (luckily she befriended a woman who spoke their version of English and translated). She was understanding that their culture was entirely different yet tried to bring change gradually. She earned the respect and love of the people, despite the language barrier.

Speaking of the language barrier, this was a MAJOR NEGATIVE of the book, yet I will still rate it 5+++++ stars (that says a lot right there). While I loved the rich language Kristen Ashley invented for this book, I hated the way the translations were handled. There is a full glossary in the back of the book, yet the full sentences were translated at the end of each chapter. I am a detail reader. I need to know exactly what the sentences said at the time it’s said. In an e-book, it’s hard to find the end of a chapter, get the translation, and go back to where you were (because it isn’t the furthest page anymore). I solved this by having the book going on two devices next to eachother. One I would  use just for translations. This could have been handled with links or having the translation right there. I found it very frustrating and it took me out of that world a little too much.

While we are on  the language subject, it was also one of my favorite things in the book. Seeing Dax Lahn and Circe try to learn each other’s language were some of the sweetest moments in Golden Dynasty.

Kahn tried very hard to be a decent guy. But after all, he is still a brutal warrior, and he MAJORLY fucks up. He does something almost unforgivable. But once again, we have to look at it not from our world, but from theirs, where behavior like that is not only accepted, it is expected. Luckily the swoony king redeems himself in a big way….sigh…. 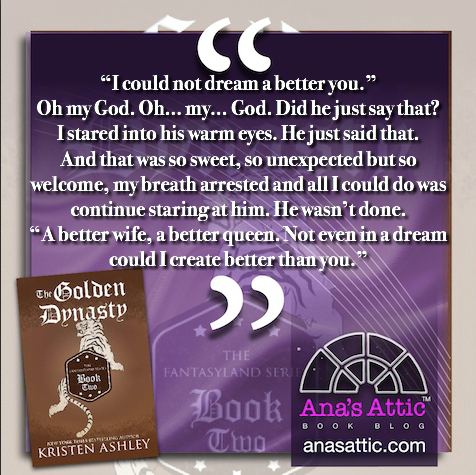 I waited so long to read this series. I knew I’d get to it one day but wasn’t overly enthused. Fantasy or historical are not my thing. But I can’t stop thinking about it! Everything I LOVE about Kristen Ashley’s writing was here with the addition of magic and fantasy and a whole new world. Lahn was the ultimate in swoony alphas, and Circe was sweet, quirky, feisty and smart. I loved how they came together with a huge cultural and language barrier and built a relationship based on compromise and love. It’s 2 weeks later and I still have a book hangover and I can’t stop trying to re-work my schedule to fit the next in the series. I can’t wait to go back to Fantasyland!

The Golden Dynasty will go on my all-time favorites list. 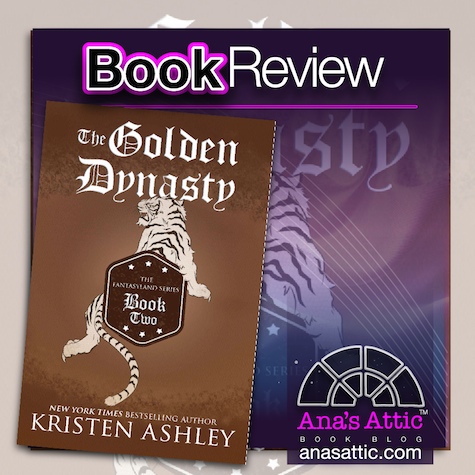