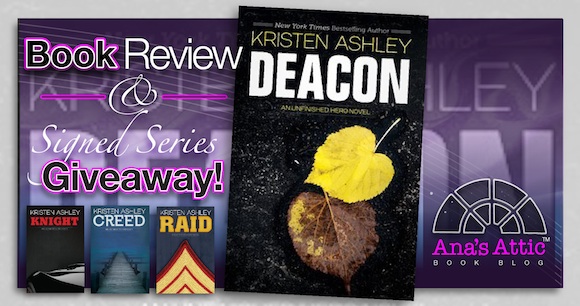 Kristen Ashley does it again. Deacon, which is probably her hottest book to date, is another Kristen Ashley work of greatness. Along with the Unfinished Hero series, Deacon has been mentioned in both the Rock Chick Series (if I remember correctly), and possibly the Colorado Mountain series as well. I have heard the name of the tough guy a lot, and was looking forward to his story.

Cassidy has dreamed of owning cabins in Colorado since she was 12 years old. She and her boyfriend, with help from her dad, end up buying a group of run-down cottages with the intention of fixing them up and renting them out. Well the boyfriend ended up being a loser who preferred to snowboard and party instead of work. One night, as they argue about the cottages, a renter comes along.

“The guy at the door was HANDSOME. Amazingly tall. Dark-haired. Rugged featured. His large frame built tough and solid.
…he was terrifying. Huge. Dark. His face a cold, emotionlessness mask…There was nothing there. He was standing. He blood was coursing through his veins. He was breathing. But that was it.
He existed.
He did not live. He did not feel. He did not smile. He did not laugh.”

But she still felt a weird pull to the taciturn guy who rented the most remote cabin 11.

“I had a near overwhelming urge to go to him and wrap my arms around him.
Tight.
And maybe never let go.
For eternity.”

Months later, he comes back, and Cassidy had finally gotten rid of her asshole boyfriend. He rents unit 11 again, but doesn’t chit-chat. Meanwhile, Cassidy is alone, renovating and taking care of 11 remote mountain cabins by herself. Over the next 2 years, John Priest aka Deacon visits cabin 11 half a dozen times, and in that time, remains icy cold to Cassidy, though that doesn’t stop her from being friendly despite her fear (and longing) of him.

“He was scary all the time.
Scowling, he was downright chilling.
Then he added his voice, which was still rumbling, but was no longer icy. It was vibrating with something I couldn’t read, but what I could read was terrifying.
“A woman was assaulted in on of your cabins while you were here, alone, in this house.”

“….Nearly two years, half a dozen visits, practically zero conversation, a lot of money exchanging hands, John Priest finally showed a reaction….that reaction was that he was supremely ticked that I had been near danger.”

But when she made a gesture of friendship, all she got was

Even a Christmas together didn’t change his chilly attitude. For four more years, John Priest came to cabin 11 every few months. Cassie tried to keep it open for him, and started to think of it as ‘his’ cabin, since that was all he would take from her, until she had a situation that needed a man, and he was there to help.

“You’re the most beautiful woman I’ve seen in my entire fuckin’ life,” he stated, his voice hushed but pulsing in a way that scared the heck out of me.
But it was his words that made me stop breathing. How is it that a woman that looks like you does not have a fuckin’ man?”

After 6 years, he had enough.

“Then I was down, back to the kitchen table, Priest (or whoever he was) bent over me, his tongue taking, his big hands moving over me just like I knew they’d be.
Far from gentle.
Rough.
Greedy.
Demanding.
Amazing.
…and he was down.
As in DOWN.
On his knees on the floor, his mouth between my legs.
Feeding.
God.
Oh God.
Not feeding.
FEEDING.”

Deacon had work though. Dangerous work. Work he had to make sure did not bleed back to Cassie. He was gone a lot, but when he was there, he was THERE. Fulfilling her every fantasy, both emotionally, helping at the cottages, and physically.

“You like ropes, I bind you. Wrists to feet like you want, ass in the air for me to play with, eat you, fuck your cunt, take your hole, all of that and you won’t be able to move.”

But a man like Deacon has secrets. Lots of them. Can they survive the secrets?

“Six years, laid in this bed, you up at the house, wantin’ this.” I pressed my lips together and stared in his eyes. “Dream come true.” ~Deacon

One thing that really made me squeee–guests from other books. Including Holden Maxwell, Sylvie and Creed, Raid and Hanna, Knight and Anya and the kids, and Marcus and Daisy!!!!

“Crazeee,” Daisy stated when I walked in. “Thought I was haven’ me a vision,” she said, circling her taloned hand in front of her face. “Got me some Rock Chicks, all in Denver, and not one a’ those bitches are hard to look at. But girl, you might be the most beautiful thing I ever laid my eyes on.”

Kristen Ashley is amazing. I can’t even compare my love for her books. She seriously needs her own rating scale. While this is a 5 star read compared to other books, it’s not quite as epic as some of my favorite Kristen Ashley books. This series tends to be a little more relationship driven, kinkier, shorter, and has heroes who may not be doing things on the right side of the law. Kristen’s amazing attention to detail had me right there in the mountains with them. I love the kinkier sex in this one, it made her sex scenes, which are usually pretty hot…REALLY hot. Deacon wasn’t all that different from many of her other books, but honestly, I don’t care. More of what Kristen does best is always OK with me. 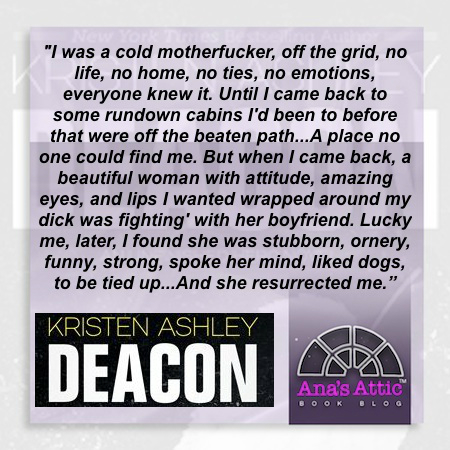 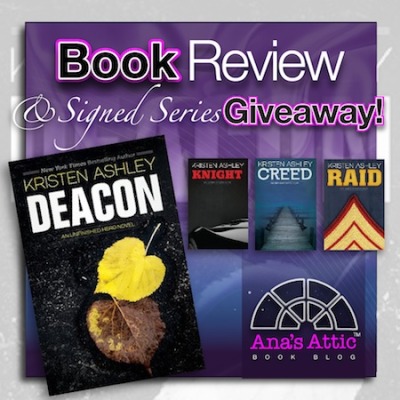 1)     Top winner will receive a complete set of signed print versions of the entire Unfinished Heroes Series, including DEACON.

2)     Three winners will receive the entire Unfinished Heroes Series in eBook, including DEACON.

3)     One final winner will receive a signed print version of DEACON. 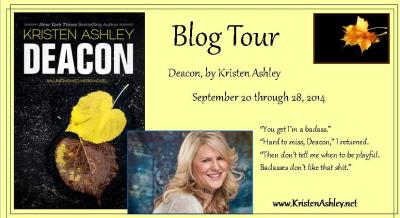