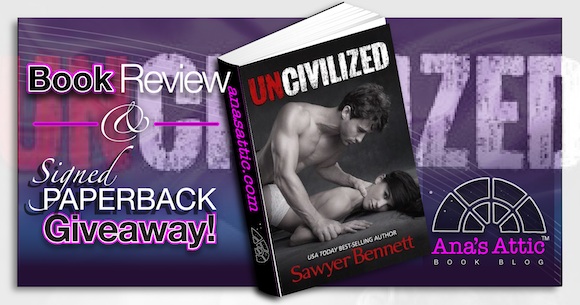 Zacharias has been living with the Caraican tribe in a remote Amazonian village since he was 7 years old and his parents died on a Missionary trip. The tribe took him in as one of their own, and he has been living there happily ever since. The tribe lives a very different life, wearing no clothes, the men going on deadly raids and hunts, and the women there to serve their needs. Now almost 25, Zach remembers very little about the world before he lived in the Amazon.  Over the years, however, he has been visited by a priest who speaks to him in English and gives him English books.

Moira is an anthropologist, hired by Zach’s Godfather to bring him back to America after searching for 17 years. Moira has experience bringing tribal members into modern society, but this would bring some extra challenges, especially because Zach did not want to leave at all. And the fact that he is gorgeous doesn’t help things.

As Moira spends a little time with the tribe, she observes Zach, walking around in all of his naked glory, take a woman right there in front of everyone, and he was very much in charge.

“It was at that point I realized that my job to help Zach acclimate to the modern world was going to be a problem for me. I realized with utter clarity that I was completely affected by his raw sensuality…the domineering way in which he took what he wanted. It was a sinful turn on to me– the utter control and harsh dominance he asserted.”

Despite the fact that Zach thought she was beautiful and he was fascinated by her, he thought of Moira as the enemy. The woman who is taking him from his home that he doesn’t want to leave at all. That didn’t stop the sexual attraction though. Especially when Moira sees him stroking himself openly by the fire.

“I had never secretly masturbated with a gorgeous stranger laying just a few feet away from me, while I watched him pleasure himself with complete indifference to his surroundings.”

Women had never looked Zach in the eyes, the men are in control where he is from, so this challenging, light skinned, red-headed woman is a total change for him, but he can’t help but get sucked in.

“I may have a little work still to do where she’s concerned, but I’ll have her bowing down before me soon…and she’ll be begging me for it.”

But the Chicago suburb is certainly different from the Amazon. Zach is determined to hate it, and show a streak of independence.

“But…you can’t…you need to go put some clothes on Zach.”
“I refuse.”

Moira is very patient with him, and tries to get him to take advantage of the time he is in America, and offers to teach him anything he wants to know.

Moira is a scientist, and this is a job. And she doesn’t have to teach him directly, does she? Zach doesn’t even know about kissing, so she starts from the beginning, with romantic movies; he doesn’t know women have orgasms, so she explains it. Then he gets his hands on the internet. Ha!

“I am finding I like my new vocabulary. Cock, pussy, and fuck. My three new favorite English words. I want to shove my cock in her pussy and fuck her hard.”

Then the one thing that really bugged me throughout the book started to crop up.

“Beautiful.” he murmurs when I’m splayed out. You’re glistening down there. What does that mean?”

I loved his wide-eyed innocence, combined with his very dominant side, but when he started speaking English like he’s been speaking it all of his life (glistening?) it got on my nerves a bit. I would have liked to see him struggle with the language a bit, and there was no description of the way he talked, what type of accent? Did he mispronounce words he’s only read? I would have loved to really see more of the struggles he goes through as he re-introduces himself to America.

“You cannot go around attacking people because they do something you don’t like. You most certainly can’t try to kill someone for putting his hands on me. Do you understand?”

“I most certainly can kill someone for putting his hands on you. I am my own man. Don’t ever forget that, Moira.”

The sex was totally hot, don’t get me wrong. And I still loved the whole book, it was very engaging and yummy. Uncivilized is a fantasy, very unrealistic, but still a unique, fun and sexy read. 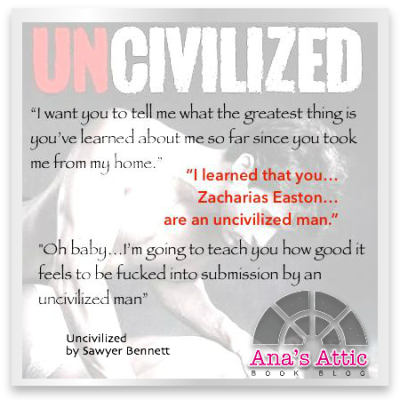 Uncivilized was a unique, very sexy read. As an erotica book, it is a solid 4.5 or even more stars. As a romance, I would have wanted to see more. Zach had such a unique situation, I would have loved to have delved more into his daily struggles assimilating to the culture. I definitely recommend for a hot, unique story, and a great change of pace. 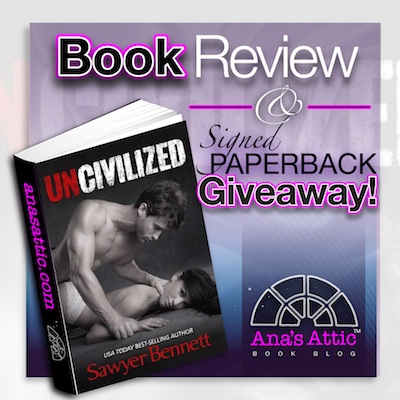