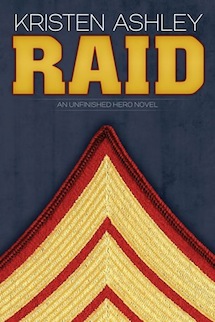 “You, just like that, any man would fight and die for the privilege of comin’ home to that every day.”

When I received an early review copy of Raid (Unfinished Hero 3) by Kristen Ashley from Kristen and Chas, I literally ran around the house doing a happy dance. I freakin LOVE Kristen Ashley. There is no other author that has written as many 5 star books as this woman has. It’s like she can do no wrong! I just want to move to Colorado or the Burg and hang out with all of her characters. The girls are all awesome and the guys are all…mmmmmmmmmmmm….excuse me while I go have an orgasm. I mean seriously every one of her guys are total alphas who take what they want and appreciate what they’ve got. They don’t take shit, and they are all deliciously badass.

Most of the guys in Kristen’s series are on the good side of the law. But The Unfinished Hero Series is a bit different than Kristen’s other series. For one, the heroes don’t exactly operate within the law, yet they seem to still be on the good side of it, with a little more vigilante than the law allows. For another, these books are shorter, and a bit more relationship driven than some of her other series that include a whole town, and last, these guys like it kinky…yum.

Hanna has lived in the town of Willow all of her life. Her 99 year old Grandma, Miss Mildred, is the whole town’s grandma (I LOVED her!), and Hanna takes care of the spunky and wise town matriarch. Hanna has had a crush on Raiden Ulysses Miller since she was 6 years old. Raid is the town hero who went off to war and lost a group of men he was fighting with, but saved a few as well. He came back a changed man, and now operates “below the radar”.

Hanna waits at Raid’s sister’s restaurant almost daily just to catch a glimpse of her crush. Until one day, she sees him with a hot blonde and gives up and gets on with her life. She buys herself an adorable girly bike to ride to town in every day, gets a makeover, a cute little sports car, and continues her very successful high-end afghan business.

Until she is unintentionally brought into a situation, and she captures Raid’s eye. Suddenly, Raid is there helping Miss Mildred every Friday with her lawn.

“Grams–” She waved a hand at me. “Don’t take away my fun.” Then she smiled and leaned my way. “Every Friday, him, in my yard, sweatin’ and mowin’ my lawn. Even old women need a thrill.” She settled back and closed her eyes. “That right there’s gonna be mine.”

If I didn’t act like a klutzy, dorky idiot every time I was around him, I would be there every Friday to watch Raiden mow the lawn too.

Then Raid starts getting to know Hanna.

He crossed his arms on his chest, making the muscles in his biceps bulge and the veins in his forearms pop. I was concentrating on taking in all the fabulousness so I might have missed the full orgasm but I was relatively sure I had a mini one.
Then he smiled.
There it was.
The full orgasm.
It was a wonder I didn’t moan.

I loved Hanna! She was an awesome Kristen Ashley heroine. Sweet and innocent, totally dorky (in a good way), yet strong. Strong enough to handle a man like Raid. And she had no problem with Raid in the bedroom either (who would?). I gotta tell you, when I read this, I got a little too excited:

She deserved a spanking for this shit. But they were new. He had to break her into that.

But honestly, there wasn’t quite as much hot kinky sex as I expected or wanted, but still….I’ll take what I can get from Kristen and from Raid, because every drop was awesome. Hanna was a totally sweet, innocent girl, but Raid brought out her wild side.

Oh my God.
What had I just done?
Oh my God!
I knew what I’d done.
I’d ridden in a car with my hand on Raiden Miller’s crotch, my mouth in his neck without a seatbelt.
Then I’d run after him, he’s thrown me on his bed and I let him fuck me.
Oh.
My.
God.

But Raid works with Knight and Creed, and his work isn’t exactly on the up and up. Hanna is not the type of girl to overlook such a thing. But Ms. Mildred gave it to her straight, and she knew if she could accept his life, the rewards would outweigh everything.

“Warm afghans, pretty blue eyes, totally dorky and an unbelievably wet, sweet pussy,” he murmured against my neck before he finished on a whisper, “The girl of my dreams.”

My favorite part was actually something Kristen points out in the epilogue was something she considered taking out! Hanna was self conscious about her tummy. There are very few woman who can’t relate to that. And Raid’s response was PURE AWESOME:

“Babe, guys like pussy,” he declared. “Okay,” I said slowly. “A woman’s gotta smell good and she needs to take care of herself. By that I mean, she’s gotta wash her hair, shave her legs and work it, whatever she’s workin’. Her clothes, the way she does up her face, the way she moves, it doesn’t fuckin’ matter. She does that and has a sweet pussy, a guy does not give a fuck and gets off on whatever wraps that package.”

And though Raid likes to be very dominant in the bedroom, when he saw she was uncomfortable with one of the things he asked her to do, but she did it anyway for him, I loved him even more.

“Babe, you gave that to me, beautiful. But playing is supposed to be fun for both of us. You play like we play, communication is crucial.”

And in typical KA fashion, Raid never lets Hanna wonder if he appreciates what he’s got.

“You get my teeth, Hanna, ’cause makin’ my own personal Peggy Sue go wild for me drives me fuckin’ crazy. You do it for me like no woman before you. I lose control because you make me and you get my teeth and what makes that shit better is that you love havin’ my mark on you.”

“Coulda knocked me over with a feather, the front bell went and I opened the door to that tall drink of cool water,” she remarked, settling back into her chair and closing her eyes. “Woke up and I knew it was a good day. Felt it in my bones. Opened the door to him, glad I was right.”

Once more, Kristen Ashley strikes gold. With her amazing alpha heroes who work to get what they want and appreciate the crap out of it when they get it; and her fantastic, sweet, tough, awesome heroines, she can pull you out of any book funk. Raid is no exception, I checked out for the day, got totally engrossed, found myself with my stupid KA grin the whole time, and watched Raid get his reward.

“Whether you got that in your bed before you go or hope to find it when you get back, that’s why you do it. You do it for her. You do it to keep her safe…You get home in one piece, she’s your reward.” “You’re my reward, Hanna.”

SPECIAL! Get the first two books in the series for $.99 each!

Knight (Unfinished Hero 1) See My Review Here (beware and brace for ‘Daddy’ if you can get over that, great book!)

Kristen Ashley is also giving away some great prizes with her blog tour for Raid!

Along with e-copies of Raid to 5 additional winners.