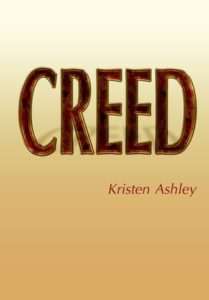 Kristen Ashley can do no wrong. I love the crap out of every freaking book she writes. Creed is no different. I loved the shit out of it!  It was badass, sexy, romantic, funny, suspenseful and emotional all-in-one. Creed is the second in the Unfinished Hero Series, the first being Knight. (See my review here)

Told in alternating present day and flashback, we meet Sylvie and Creed when she is 6 and he is 11.  Sylvie lives with her wealthy ass dad and stepmonster and escapes the house to get away from ‘the words’ of her daddy and stepmom, fighting, often violently. She runs into the woods, right into Tucker Creed.  11 year old Tucker lost his dad and his mom is the town drunk/slut. Tucker may be from the wrong side of the tracks, but they immediately bond, and he vows to protect Sylvie forever. Throughout the next decade or so of growing up, Tucker is there for her, her best friend, her protector, and eventually her boyfriend, but they keep their relationship a secret from the world. They make plans to run away together as soon as she is legal, on her 18th birthday. Tucker has always been there for her. Always. But he never showed, and they never saw each other again.

Present day, 16 years later. Sylvie is a badass chick, working as a protector for Knight. With no boyfriend or family, a home she hasn’t made into her own, Sylvie is missing something in her life. She’s fairly happy, has very loyal and devoted friends, but has never really been in a relationship. She works alone, but when some issues crop up in Knight’s organization, he brings in a partner for Sylvie. Guess who it is? Tucker Creed, 16 years later, after abandoning her on that pier, waiting for him, on her 18th birthday.

“Tucker Creed, my first love, my protector, my savior. My betrayer.”

All of this is revealed going back and forth between present and past tense, and I enjoyed the way it unfolded. Tucker Creed was an amazing boy, that turned into an even more amazing man. Try as she might to avoid getting involved again with Creed, there was no way to avoid it. How can you not give in to this?

-“I’ll never let you go but I’ll let you leave…for now.”
-“You’re my world, Sylvie. Always have been. Always will be.”

-“You need me. You won’t stay away and you won’t let me go because, baby, you can’t breathe without me.”

As the story progresses and they are back together, it is so clear that these two were made for each other. They are so alike in so many ways, it’s like they share a soul.  Though Sylvie has changed a lot in 16 years, she has turned into an even better partner for Creed.

-“Then and now, beautiful, I’ll take you any way you come to me … Any way. I love this Sylvie, I loved that Sylvie. I just love you, baby.”

-“You love me?” he asked quietly. I dipped my face close and answered quietly, “On a cold night, a long time ago, you put your hands almost exactly where they are right now and, I might have been six years old, but I fell hard. So, yeah. For over twenty-seven years, every day, every minute, every second, I’ve loved you, Tucker Creed.”

I did, however, find myself a little confused when, at about 75%, I felt like I missed something. My buddy over at Scandalicious told me to HANG ON! I did. Holy Crap. Now I get it. I see why he left. I even see why he stayed away for years. But not 16 years. Creed is a full-fledged badass. If he spent his life pining away for the love of his life, tattooing her name on his back and other things (no spoiler), why didn’t he try to find her? OK, I see that perhaps he couldn’t deal with seeing her happy with someone else. But 16 years is a LONG time, especially with 50% of marriages ending in divorce. If he couldn’t handle seeing her, at least look her up or have her investigated! Find out if she is married. I don’t know, but that really upset me. He is SO PERFECT for her, he is absolutely and totally devoted, but that just felt off to me.

Of course, this did not really detract from the story. Creed was definitely more character driven than previous Kristen Ashley books. More focus was on Sylvie and Creed than the action that usually takes place in her books. And I must say, I really loved both of them. Sylvie was interesting. Her personality changed from the beginning of the story where she was a female alpha badass to the end where she was more of a typical awesome KA heroine. But the more I thought about it, the more I realized that it worked. Once she found the other half that she lost, she was able to come into her own.

I loved this book. It isn’t my favorite Kristen Ashley book, however. I loved the characters, and Creed is one of my favorite KA men. I just felt like it moved a little slower, I put it down a little more, and because of that, I felt like I missed something, since it took so long to find out what really happened. That, and the fact that I still can’t see why it took 16 years for them to reunite, make it a book I absolutely loved, but not as much as many of her other books. Usually when I read her books I find myself “squeeing” all over twitter and goodreads and I read it in one sitting. I was busy, but still, it took me 3 days to read this, and I never went online about it. Again, this is a 5 star read, but compared to some others, like Sweet Dreams, Motorcycle Man and Games of The Heart, it is not as high on my 5 star list.
.
Purchase Creed at: