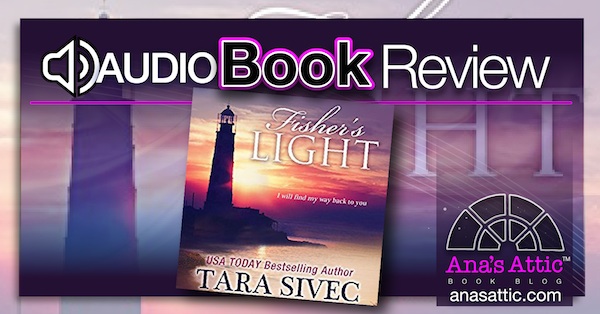 Contemporary Romance. Stands alone, but there is a companion novella.

Some of my favorite audiobooks are re-reads of favorite books. Fisher’s Light was a HUGE 5+++ star favorite in 2015, so when I saw it was out in audio, I decided to grab it and give it a listen. Since it has been almost 2 years since I read it, and my memory is horrible (even though there are things I remember more about this book than most), I have to say, it was just as amazing, if not even more amazing on audio with two favorite narrators. I am not going to re-review because there is no need. I am just going to share my review from 2015 and add 5 stars for narration, because they brought the story to life.

Wow. Tara Sivec is a genius. From laugh-your-ass-off funny, to new adult sobfest, to action romance, to utter perfection. That was Fisher’s Light. It was pure genius. Tara can write anything, and the key, I think, are the real, relatable characters she writes. They are your best friend, your neighbor, your brother, your husband. Tara doesn’t need to write billionaires, doms, rock stars, bikers or stepbrothers, she writes about real people. And none more real than those in Fisher’s Light.

War changes everyone, son, there’s no shame in that, If it doesn’t change you, you were already too fucked up to begin with.”

Nothing makes you grow up faster than enrolling in the military and serving overseas. It takes a very special person to be able to go over to the most horrible place in the world, all in the name of protecting other people so our world can be safe. These people are selfless. We can not even begin to understand what they go through every day, seeing best friends and innocent people being violently killed. Having to kill people themselves. Living in fear every minute of every day. WE.HAVE.NO.IDEA. You can’t come back from that place the same as when you left. And how could anyone back home ever understand you again? They have a calling. A need in themselves to keep going back. “No man left behind” is ingrained in them, and as long as their colleagues are still fighting, they need to as well. Even if the love of their life is home waiting.

I don’t presume to know anything about being in the military, or having family in it. But Tara made me understand it in a different way. She made me appreciate the men and women who continue to serve so much more than I did before this book. But I do understand life with someone with panic, anxiety and PTSD. And it’s obvious Tara knows as well. She must, because her descriptions of living with someone that has it were so accurate and hit so close to home.

How do I get that back when the darkness is hell bent on taking over, holding me in its clutches and making sure I never see the sunshine again?”

Lucy and Fisher met in high school. Living on an island in the outer banks, Fisher grew up wealthy, with the family who the island was named for, and a dad who is “the king” of said island. Lucy and Fisher were made for each other and neither of them cared what anyone else has to say about it. Though Lucy was never ‘good enough’ for Fisher according to his dad, that didn’t stop them from falling in love and getting married after Fisher’s first deployment.

But each time he came home from another deployment, he was less of the guy Lucy fell for, and more and more distant. 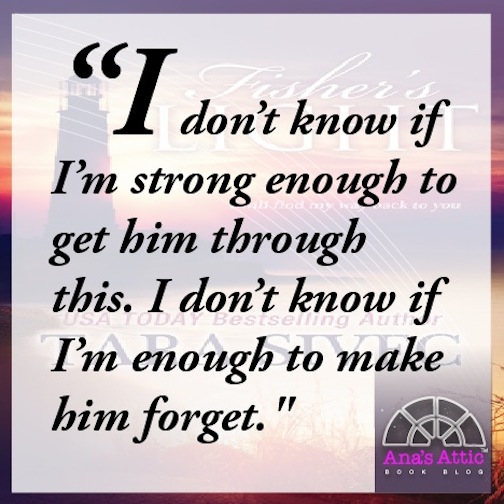 I was punishing her for being so soft and sweet and beautiful when all I’d known for the last year was hard and awful and ugly.”

Though Lucy didn’t mind him taking his aggression out on her, he couldn’t stand himself for it, and punished himself even more.

I have to make her leave so that I can never hurt her again.”

And as his illness progresses, he loses all sense of who he really is.

Well Fisher succeeded in pushing the love of his life away when he sent divorce papers the previous year. Lucy has been left on his family’s island, caring for the old fashioned inn she inherited from her family, and she is just scraping by.

But a year later, he’s back.

I should have realized that she was my light. She was everything bright and beautiful about my life and it went to shit after she left.”

I loved how honest Lucy’s feelings were, and they never made her seem like a selfish bitch. It must be so hard for military wives to come to terms with the fact that fighting a war in a foreign land is more important to them than staying home with their family, and Tara nailed those feelings, which made me love Lucy even more. Nobody is totally selfless! Living with a spouse with PTSD can be just as hard on the spouse.

I can’t pick a fight with him just to get a reaction out of him, even though I want to. I want to see something spark behind his eyes instead of the cold, dead stare he seems to always have lately. I want to smack him across the face, push him so hard in  the chest he stumbles. Something, ANYTHING to get some kind of emotion out of him.”

There were lots of changes through the book, both in time and point of view. Told in flashback, there was a good amount of time-jumping, but not once did I become confused.  There was also changes in point of view, which was really special. There was a part where you actually get three points of view. Fisher’s journal, Lucy’s, and Fisher himself.  Just when you want to kick him in the nuts for being a total dickface, he goes ahead and breaks your heart and you just want to hug him.

The setting of the book, Fisher’s Island, absolutely came to life under Tara’s guidance. This was by far the most visual book Tara has written, and it gave me a very accurate picture of the island in my mind’s eye. Her attention to detail was impeccable.

Fisher’s Light by Tara Sivec will absolutely be on my Top Picks for 2015 list. I think this is absolutely Tara’s best work to date. It feels very personal, like Watch Over Me without the intense crying that one caused. This is another perfect book that showcases the talent Tara has at writing any genre she sets her mind to, and knocking it out of the park. Fisher’s Light was so realistic about life with a person with PTSD, that it felt like a journey she must have taken at some point. I love a second chance romance, but Fisher’s Light had so much more, and was the perfect balance of emotion, symbolism, heart, and realism that will keep anyone up all night turning the pages. **Or listening intently** 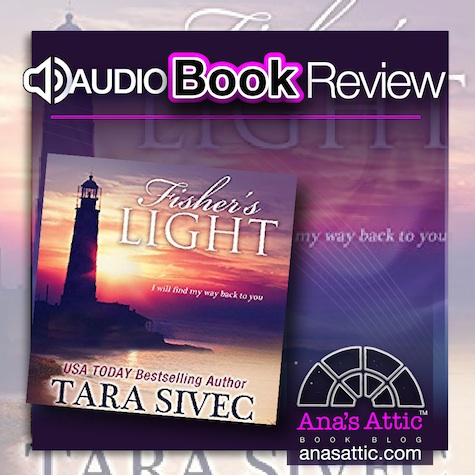