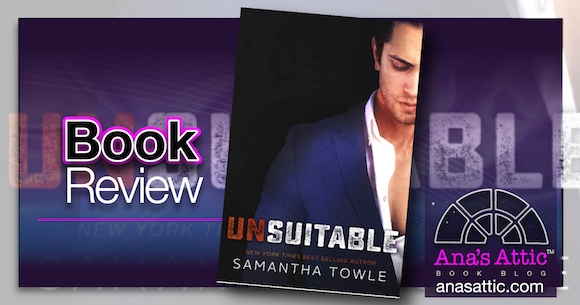 I love Samantha Towle’s Storm series, but it’s been a while since I read her. When I saw Unsuitable was on pre-order sale for 99¢, I clicked and never even read the blurb. So I went in blind, and read it in 2 sittings, I couldn’t put it down. Luckily the blurb doesn’t spoil a thing, so I will give you a quick rundown, as always with no spoilers.

Unsuitable is a romantic suspense, and I just felt like something big would happen all along, making it so I couldn’t put it down. I had ideas, but Unsuitable was not a completely predictable romance.

“I trusted the wrong person, and it cost me my brother and eighteen months of my life.”

Daisy is being released from prison early after spending 18 months there for a crime she didn’t commit. She was set up by her boyfriend, and she will never let herself trust a man again. Worst of all, she lost guardianship of her younger brother, who she raised as her child, and he was sent into the system. Her goal upon release was to prove she is capable to get her brother back.

Her probation officer has her set up for a job as a maid at a big estate, and she starts right away. What she didn’t expect was that her boss, “Kas” Matis, would be gorgeous. He might be hot, but he is a total douchcanoe to her or as she liked to call him, a “Kas-hole”.

“It’s such a shame he’s a wanker because he’s really good-looking. Shame his personality spoils what could have been a perfect person.”

Kas blows completely hot and cold. One minute he’s a total kas-hole, the next he’s awesome.

“I know Kas and I hit some sort of truce yesterday, but he still dislikes me.
And I still dislike him.
Right?”

Kas is a mystery. You are never really sure if you like him or hate him, but Daisy isn’t sure either!

“I want him. I hate to admit it, but it’s true.
I might not like Kas, and I might want to punch him in the nutsack. But I do want him.
How screwed up is that?”

They might want each other, but Kas has secrets, and they just may be too much for their relationship to endure. 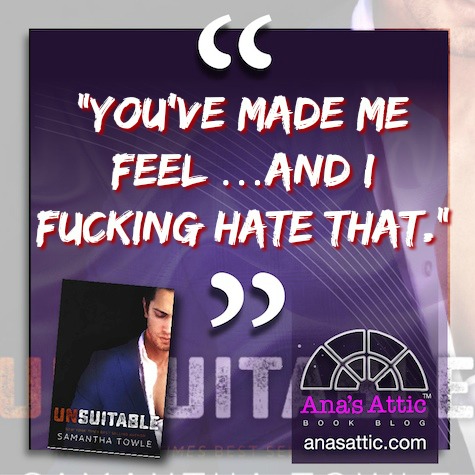 Unsuitable by Samantha Towle is a unique romantic suspense that I would have read in one sitting if I didn’t have to stop to do my sale list. I love books where the guy is a jerk at first (or a “kas-hole”). There were a lot of little facets to the story that all come into play at some time or another. It wasn’t completely unpredictable, but there were still a lot of surprises. I loved the heroine, Daisy; she was a fighter who wouldn’t let herself get beat down despite 18 months of wrongful imprisonment. But I never fully fell for Kas and I did think the end could have been expanded on a bit more. All in all though, Unsutable was an engaging unique read that I had to force myself to put down. 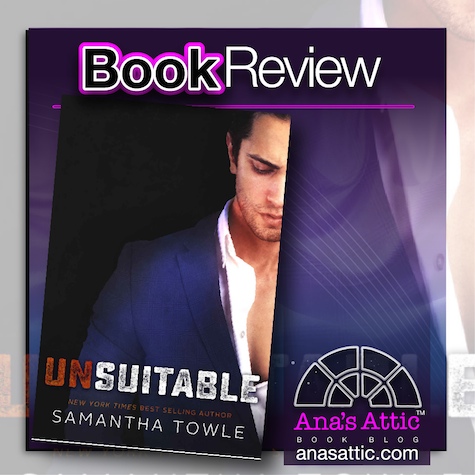