“Your mind is both fascinating and repulsive.” 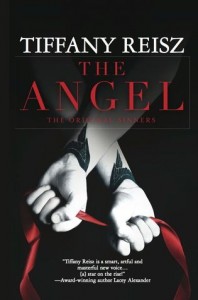 If you have not read The Siren by Tiffany Reisz, stop right here. There may be Siren spoilers ahead. Please also make sure you read all the short stories and freebies listed here: The Original Sinners Reading Order, especially Griffin in Wonderland. You will enjoy The Angel that much more if you read those first.

Tiffany is an amazing writer who is not afraid to push buttons and break all taboos. Though her books are a bit of a departure from my normal read, I love them all the same. There is a lot of sex in them. Is this the kind of sex that gets me turned on and ready for bed? No. Not most of it. It pushes all my limits. Do they have an HEA? Not really, but they do end happily for now.

The Angel takes place a little more than a year after The Siren left off. Søren and Nora are very happily back together, and Zach is happily back in England with his wife. Nora hasn’t seen Wesley since she left him for Søren, but she privately can not stop thinking of him. We get to see a lot more of Søren and Nora’s S&M relationship here, including blood play (there is only one scene and it is consensual),  And we get to know and understand him a bit more in this installment.

Then trouble begins to brew. Søren is on the short list to become bishop and Nora’s file was stolen from Kingsley. At the same time, Suzanne, a reporter, receives a fax that Søren may have a conflict of interest in regards to the bishop position. Suzanne has some very real fears of the church, and begins her investigation with the intent of taking down Søren. To avoid more potential conflict, Søren sends Nora away for the summer with young Michael (The Angel) who is now legal and ready to be trained as a submissive. Nora takes them up to Griffin Fiske’s house/castle in the country.

Griffin is as much fun as Nora. A lighthearted, fun, playboy Dom, he is also bisexual and falls for the beautiful shy young angel (Michael) immediately. But the rules from Søren say hands off. I enjoyed this part of the story the most. Seeing this young man grow from a boy who “doesn’t talk” and deeply hates himself for what he is into a strong young man with confidence was a wonderful journey. The boy had such a need for affection, I just wanted to reach out and love him. Shame on his parents for not doing that!

Nora….well she is just as awesome as in the first book. Funny, bold, brazen, smart as a whip, sexy, and totally open about everything, she is one of my favorite female characters of any books I have read. She is totally unapologetic and a complete force of nature. While Nora was a Domme in The Siren, in The Angel we get to see both sides a lot more, especially in the scenes with Søren.

“If it’s an abomination, it’s because you’re doing it wrong. Bear down hard, then relax. It’ll fit better.”

Søren was in the first book, but we never really got to know him, except to hate him. While he just seemed heartless and cruel in The Siren, we begin to peel back all of his layers through Suzanne’s investigation and as we learn about his past, we begin to understand him a bit more. And dare I say, like him? He is a sadist to the highest degree, but he loves deeply, is clearly an amazing priest to his congregation, and strangely enough,he is a pacifist.

Kingsley is a hottie who I love to see more of, but there wasn’t enough of him in this book (though he starred in what, to me, was the hottest scene in the book). And Wesley makes a very brief appearance, though he is ever-present in Nora’s mind.

This series is unique. The subject matter is dark, totally taboo, and completely controversial yet reading it doesn’t seem to be. The Angel explores love, relationships, history, family, lost love, homosexuality, suicide and more, yet remains light and funny at times. I enjoyed The Angel perhaps even more than The Siren, and I cant wait for The Prince in November!

*I received this book as an ARC from the publisher (via Netgalley) in exchange for a fair and honest review.