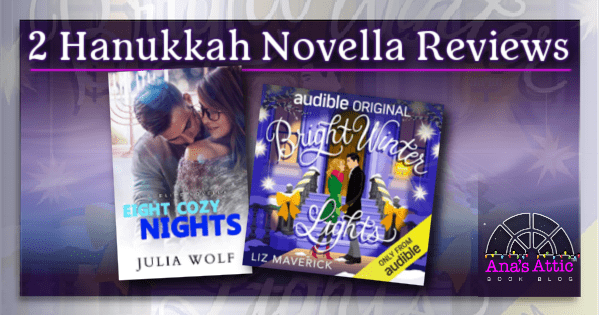 Looking for more Hanukkah romances? Check out my full list with reviews.

Bright Winter Lights by Liz Maverick was a quick, clean Hanukkah romance. There are so few m/f Hanukkah romances, that I get so excited when a new one comes out! I grabbed this one because I loved the writing style of the first book, Eight Winter Nights. I listened last year and didn’t remember it at all, so this one stood alone very well.

Adam and Sara were very close childhood friends. He moved to a fancier neighborhood, but Sara and all of Adam’s old friends felt abandoned, like they weren’t rich enough to hang out with him. So for 10 years the whole group has kind of held a grudge against him and avoid him at the annual Hanukkah party.

So when Adam shows up out of the blue saying he told his mom he was bringing Sara to the party as his girlfriend, it’s quite a surprise. They enter into a fake dating relationship, but I’m not really sure why Sara agrees. Some forced proximity adds to the fun.

Bright Winter Lights was a quick audible-only listen. It wasn’t very Jewish at all except that they are going to a Hanukkah instead of Christmas party. It was missing so much detail that I had a a bit of a hard time connecting. This would have been great as a full-length read, but as it’s written now there is more about the friend group than the romance. Still, I appreciate it being a Hanukkah book without the over-exaggerated Jewish stereotypes, and I enjoyed the listen very much.

I bought Eight Cozy Nights by Julia Wolf a few years ago but never got around to reading it. I’m glad I found it again on my kindle! Though it’s listed as book 5 in a series, I didn’t feel like I missed anything by not reading the others.

Larissa just moved into her new place when she almost broke her leg on the neighbor’s bike leaning against her door. Yo (short for Yosef) could not have felt worse, but at least he got to meet his curvy new neighbor.

Larissa noticed the mezuzah on his door, so when she found her candles but couldn’t find her menorah while unpacking, she decided to see if Yo had an extra. And so began eight nights of the holiday together.

Though this was a short read, the story felt believable and the couple actually had communication! I loved how they fought over applesauce or sour cream for the latkes (applesauce for the win!), and that it wasn’t overly religious. There is definitely some spice in this one, so if you like sexy time, you won’t be disappointed. 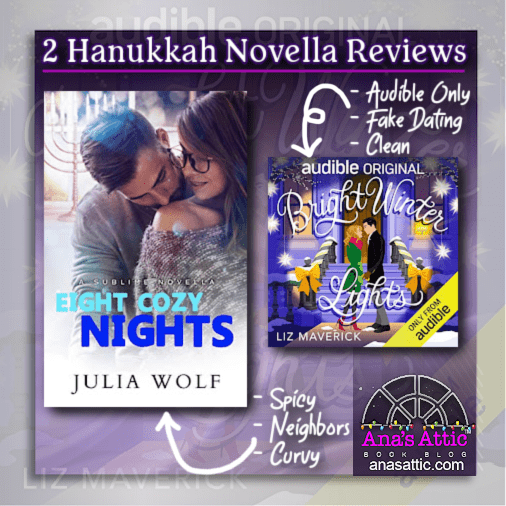