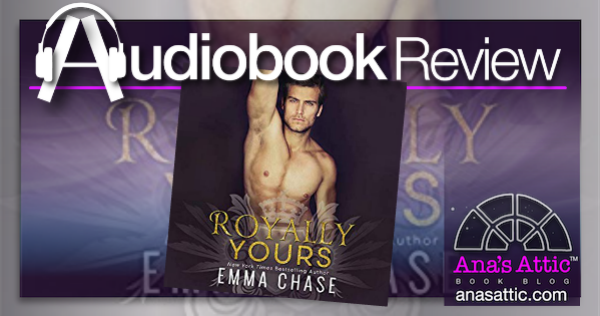 “Every dynasty has a beginning. Every legend starts with a story. This is ours.”

Emma Chase has been a favorite author of mine for years, and she’s one of the rare ones whose books I will buy without reading the blurb. Since I loved the Royally series, of course I was so excited for Royally Yours, but I had no idea it was a series prequel about Queen Lenora! Royally Yours can absolutely be read on its own because it begins over 60 years before the other stories. If you have read the Royally Series you know all about the tough Queen Lenora, and getting to see how she became the ruler and grandmother she is now was more wonderful than I would have ever expected. 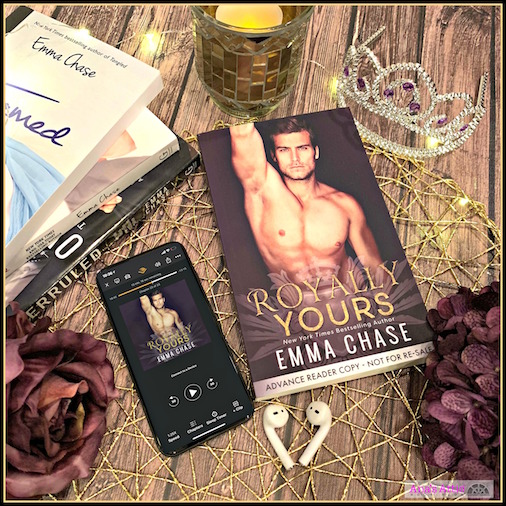 Being that the Wessco monarchy is very old fashioned even now, this story takes place in the 1950s and feels like a timeless historical. In other words, the story itself felt like it could take place any time, and since it was told in first person rather than third, it didn’t have the traditional historical feel.

“No woman is born a Queen, no matter the title attached to her name at birth. Kings are crowned. But queens.. queens rise. … And then…they reign.”

Princess Lenora was born and bred to be Queen, and even as a little girl, she took the obligation to her people and her position very seriously. When she is thrust into the position as the first ruling Queen of Wessco at only 19, she was ready. Unfortunately, the Council was not ready for an unmarried queen. Responsible queen that she is, Lenora realizes that the only way she can accomplish anything with the council and her people is to reluctantly agree to marry. The prospects are grim though, until her best friend’s brother, Duke Edward, agrees to marry this beautiful woman who fascinates him.

“God damn, how I want her. Not even in my wildest, most selfish adolescent days did I want to take and take a woman like I want to take her.
Wild and hard, lazy and long.”

While this is an epic romance, it’s also the story of Lenora and her ascension to the throne. Her story is heartbreaking at times. She has lived a very lonely existence, and I shed more than a few tears while reading Royally Yours. It gives so much insight into the Queen Lenora of the future that we read about in the previous books. But when Edward enters her life, the adventurer she used to crush on from letters to his brother gave Lenora everything she needed. 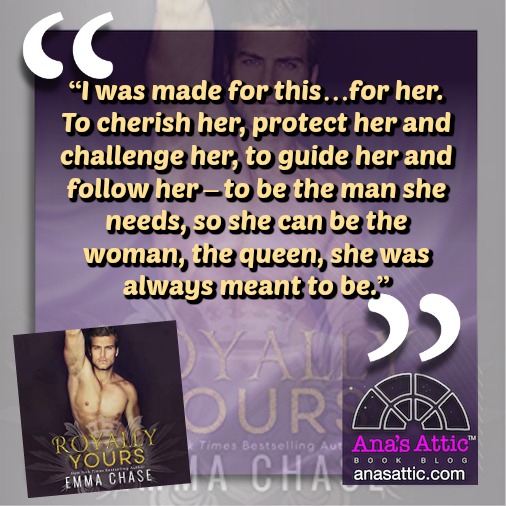 I loved how Edward was all man, yet he had no problem being ruled by his wife. He was everything a partner should be and seeing Lenora as a happy, sexy, witty, fierce and independent woman was an absolute treasure. Though their romance didn’t commence until later in the book, that was OK with me, I thoroughly enjoyed reading the story about Lenora that came first.

“Won’t you miss it? Won’t you miss the freedom, the adventure?”
I chuckle and shake my head, because she still doesn’t understand. I put my hand over hers.
“Making a life with you will be my greatest adventure, Lenora.”

At first, I had a hard time with Andi Arndt (who is so familiar to me), doing a fake accent even though she did it well. Though I got used to it, I would have preferred someone with a real accent that I never even heard of. The male narration was excellent, and al- in-all, I think the narration added to my love for the book.

I think Royally Yours by Emma Chase is my favorite of the Royally Series. It can easily stand alone since it takes place 40+ years before the other books. I loved how fierce and independent the Queen was, but we also got to see first hand why she is a bit cold in the future. She has lived a lonely, extremely sheltered existence, and meeting the dashing, adventurous Edward could not have been better for her. I loved how this was very much Queen Lenora’s story, but it was also a sexy, swoony and funny romance. Bravo Emma Chase, it’s another 5-star favorite!

Emma Chase is the New York Times and USA Today bestselling author of the hot and hilarious Tangled series and The Legal Briefs series. Emma lives in New Jersey with her husband, two children and two naughty (but really cute) dogs. She has a long-standing love/hate relationship with caffein 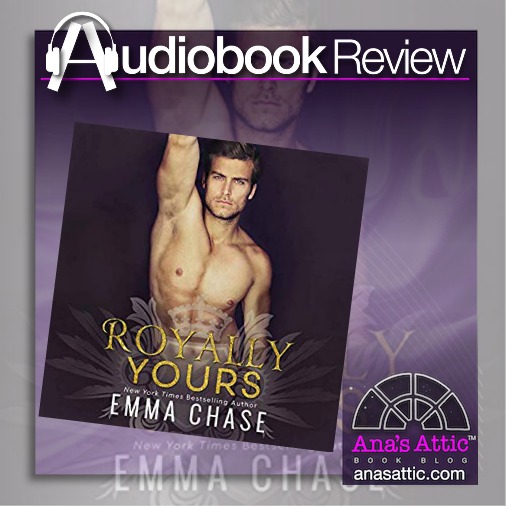