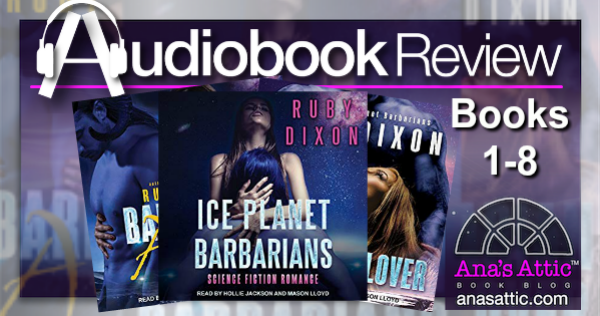 All Narrated by Mason Lloyd and Hollie Jackson

Obsessive binge-read alert! I have seen friends post about Ice Planet Barbarians and it just seemed so silly to me. But after reading a historical and a YA Sci-Fi last month and loving them, I decided to continue my quest for unique reads. I figured I’d listen to the first in the series just to see what it was all about. Before I knew it, I listened to seven and had to force myself to stop because I had committed to listen to other books. But I can not wait to get back to it!

I know I know, it sounds so ridiculous! And honestly, it kind of is, but in a fun, sexy, good way. The first story, Ice Planet Barbarians, is a bit brutal. A dozen 22-year-old women were kidnapped by aliens, who, after doing some medical stuff to them, caged them on the ship and raped them if they made too much noise. They were cargo to be sold at auction to other aliens. During the journey, the aliens were forced to offload the cargo section, and they crashed on an ice-covered planet.

The first book, Ice Planet Barbarians, features Georgie. She became the de facto leader of the girls and ventured out of the crashed ship and out into the icy, alien land to get food or help. What she finds is gigantically tall, blue and has horns. She should be afraid, but Vektal will do anything for this creature he has found, and you just can’t be afraid of him….especially with the way he greets her! HOLY HOT, I kind of wish my husband had that alien tongue!

“I’ve found an alien that likes to eat pussy as a greeting.”

Vektal’s people are a dying race. They have very few women and a lot of male hunters. Conveniently, a dozen young women dropped from the sky! They don’t speak the same language, and I really enjoyed how they tried to communicate with each other. 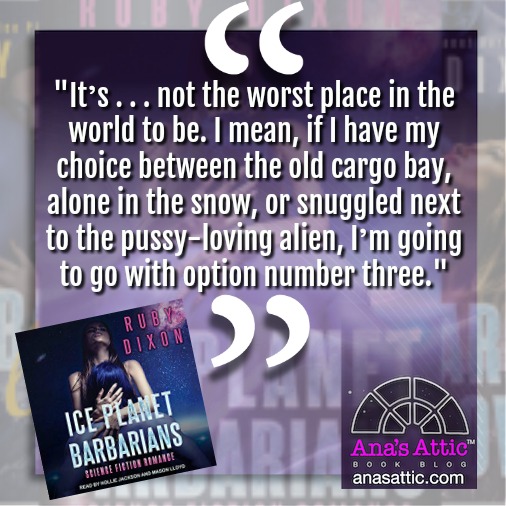 A quick recap of all 7 that I have read so far:

Ice Planet Barbarians
I loved the first, and it completely hooked me. Georgie and Vektal I think are still my original favorite. Or maybe it was just the wonder of this alien race seeing humans for the first time. Either way, it was well written, had a lot of story, was funny even though there were some disturbing parts, and there was a lot of delicious smut with a blue alien who is ridged in all the right places.

Barbarian Alien:
This is Liz and Raahoosh’s book. Liz was a total bitch and difficult at first. I thought it was funny, but I know a few people who couldn’t get into this one because of her. If you can get past the first 30-40% of her, she grows on you. I liked her snark. Raahoosh was dreamy and sweet. The interactions between sweet Raahoosh and Snarky Liz was so much fun!

Barbarian Lover:
Kira had a translator surgically attached to her ear from the original bad aliens. She thinks she endangers the whole tribe because the aliens can come back and find her. Kira had other things about her that made her the sad and somber girl of the group. But Aehako was so light and patient and so sweet, and his gift to her was so funny that I loved the couple together. This one had a little more depth than the first two as Kira had a bit of a journey of self-discovery.

Barbarian Mine:
Oooh. This one was like an alien Tarzan! Ruhk was completely alone in the world since he was a child. There was nobody to teach him anything from language to manners to sex, it was all new to him. Harlow was also her own woman. A little different than the rest of them, I got a little more emotional with the thought of a little boy in a scary world all alone.

“It still feels like a dream that she is here with me, and I clutch her to me harder, afraid to wake up. Afraid that I’ll rouse and be utterly alone once more.”

Ice Planet Holiday:
A quick little novella celebrating “No Poison Day” (You have to read it to get it). It was cute and fun but Georgie is starting to piss me off. This was a quick novella that featured Claire, and I liked that it showed that not all alien romances are swoony perfection. I’m glad she got her happy ending.

Barbarian’s Prize:
This one was pretty emotional! Tiffany was brutally raped by the original aliens and left with PTSD. She is also the woman all the aliens want. All she wants is to be left alone but the men keep bringing her gifts. But Salukh is different. He was patient and won her as a friend first. I loved this one. He was patient and understanding and was perfect for her. The “games” were a little cruel though.

Barbarian’s Mate:
I loved Josie and Haeden’s hate-to-love romance. Haeden had such a tragic background and Josie was kind of a bitch after a while, but she has a very traumatic past, and her body is telling her to mate with someone her mind doesn’t want. It has to be confusing as hell! Once all the miscommunication is over, I loved the couple so much!

Barbarian’s Touch:
This was sweet and much more PG than the rest. I loved that Lila was deaf and there was no easy solution to their communication barrier. I loved how important it was for him to learn to communicate with her. I really enjoyed this one, but not really looking forward to her sister’s book next, she was kind of a bitch, so I am taking a bit of a break. Barbarian’s Taming is all loaded up and ready though. The break won’t last long.

Hollie Jackson did a great job with the girls, and I loved how Mason Lloyd mispronounced human words and had a little accent. He was amazing for the aliens.

I feel a little silly for falling in love with these blue horned aliens with bumpy tongues and spurs (raaaawr). But all they want to do is make their mates happy, how can you not fall for them? I loved how naive they seemed, yet rough and primitive. Each book had a lot more story and depth than I expected, yet they were still swoony, fun and super sexy. I had never read sci-fi before, but I read paranormal, and this is really no different. The Ice Planet Barbarian Series was a total campy, fun and sexy surprise, and I plan on bingeing on all that is Ruby Dixon! 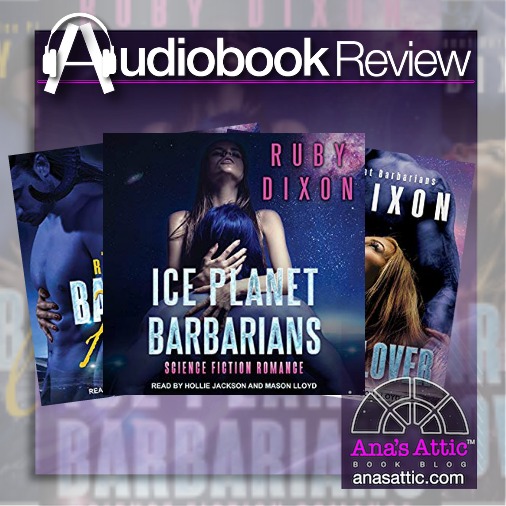