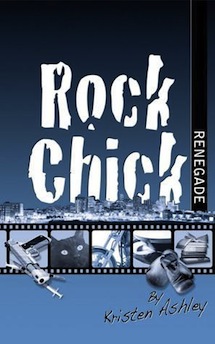 Damn! This series continues to get better! Kristen Ashley can do no wrong. I have read The Burg Series, The  Colorado Mountain Series, The Dream Man Series and The Unfinished Hero Series and loved every book. In every one of those series (I think) there is some crossover from the Rock Chick Series. For some reason, I just didn’t think the Rock Chicks could be as good as the rest. I was wrong.

Sidenote here about reading this right after Own The Wind. Rock Chick Renegade was FILLED with all of the delicious stuff that was edited out of Own the Wind. Because I still loved Own The Wind so much, I didn’t realize how much of it was gone until I read this. Two pages were devoted to what the heroine was wearing that day, or exactly the layout of the hero’s home. To me, it’s part of the reason you can really FEEL where you are and get so involved in her stories, and part of the reason I love Kristen Ashley. Add to that her amazingly perfect alpha heroes and her kick ass, wanna be BFFs heroines, and her fun side characters, and I love every freaking thing she writes.

I went back to my last review of Rock Chick Redemption and realized I could write almost the exact same review. I read this with a perpetual grin on my face, AND I cried. I was in Kristen Ashley heaven…my favorite place to be. 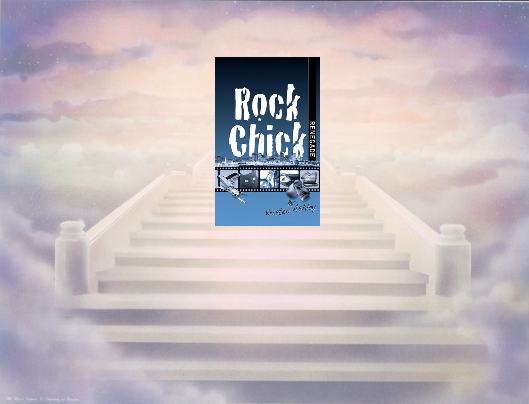 Jules is a social worker at a local runaway shelter. Her nickname is “Law” because the kids listen to her, her word is Law. She has lost almost everyone who ever meant anything to her, and has kept people at arms length since she was young. When one of her “boys” is lost to some bad drugs, Jules decides it’s time to kick some dealer ass. She trains and learns to shoot, but when she gets in over her head and brings herself to the attention of the hot bunch from Nightingale Investigations, Vance Crowe was the first to catch her.

“Those boys got a way about ’em, Jules. They don’t fuck around. They see somethin’ they want, they get it. They’re fuckin’ famous for it. A woman don’t stand a chance. He seem interested?”

“…there’s nothing to worry about. We went our separate ways. I’ll be smarter, I’ll be more quiet, I’ll be –”
“Laid, good and simple. Crowe got a look at you, you’re his. You’re gonna be fucked and I mean that literally.”

Vance Crowe…mmmmmmm. Vance is gorgeous, of native american heritage, a biker, and a total player. Everyone knows it, and they warn Jules off. But by now, we already know these guys. They take what they want, and nothing, especially not an alarm system could stop them.

“I was snagged around the midriff and thrown back to the bed, my head hitting the pillows, and Vance Crowe rolled his body over mine. I stilled and looked up into his dark, lushy-lashed eyes.
“Oh my God,” I breathed.
“Mornin’,” he said to me, like we woke up next to each other every day.
“Oh my God,” I breathed again.
His hair was not in a ponytail but falling down around his face and shoulders and, I kid you not, he looked like a Native American Warrior God.
“Do I have your attention?” he asked.” (…)
“How did you get in here? My alarm -” I started.
“I disabled it”
“Oh my God,” I said again.

Jules is in her mid twenties and has never been with a man before, so believe me, she has Vance’s attention.

“Outside my bike, never has anything important in my life been just mine.
My body stilled, so did my heart, and my eyes locked with his.

…”Mine”, he muttered, his deep voice hoarse, that fierce undercurrent there.

Jules was definitely more of an ass kicker than previous Rock Chicks, but I love how the whole posse keeps getting bigger. Jules never really had anyone in her life, but suddenly she has all of Nightingale Investigations, all of the Rock Chicks, and all of the crazies from Fortnum’s as her family. Including Tex. I love him!

Rock Chick Renegade was by far my favorite Rock Chick book yet. But knowing I still have Luke’s, Mace’s and Hector’s stories plus Ally’s on the way makes it so hard for me to not suck these down like M & Ms or potato chips. But I LOVE knowing that I have these to look forward to, and to pull me out of any reading funk I get in.

“Any man is defined by the woman who shared her bed with him… and it works the other way too… if someone like you, someone as unbelievably beautiful as you, as crazy and sweet as you, filled with attitude and courage with her heart in the right place… if someone like you shares her bed with me, then that says something about me….This is it. You and me. No matter what.”