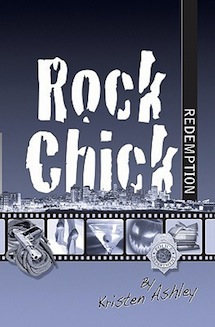 Rock Chick Redemption is the 3rd in the Rock Chick Series by Kristen Ashley (see series order here) and by far my favorite so far. I have a feeling I will love these more as it goes, if it is even possible. The only problem? All those amazing, hot, alpha guys in Denver will be gone! Noooooooo! I want one for my very own!

As soon as I started Rock Chick Redemption, it happened. That K.A. feeling….the goosebumps, the giddy, excited feeling, the stupid, perpetual grin I get whenever I read one of Kristen’s books. Even my husband kept commenting on the stupid smile I had.

I have to space out my Kristen Ashley books for a few reasons. The largest being NOTHING–not one fucking thing- gets done around my house. This book is 672 pages of pure escapist happiness, and I loved the crap out of it!

I am glad it’s been a month or two since my last Rock Chick excursion. It was like visiting all of my BFFs and fantasy men after not seeing them for a while….yet this book starts about 48 hours after Rock Chick Rescue (Rock Chick 2-see my review here) ended. The fashionable girly-girl Roxie is on the run from Billy, her loser/criminal boyfriend of seven years who just won’t let her go. Every time she leaves, he brings her back. So her new plan is to go to Denver to meet her Uncle Tex, who she has been writing letters to since she was little.

Roxie knew Tex worked at Fortnums so as soon as she walks in the store the fun begins…as it always does in Fortnums. Damn, I so want to go hang out there! So Roxie walks in, and what does she see?

“It looked like GQ was having a convention and all the best looking guys had decided to have coffee at Fortnum’s before going to seminars on how to cope with being really, unbelievably, fucking gorgeous.”

There were five of them. Two looked a lot alike, like they were brothers. But, of the lot, it was only the one with the whiskey-colored eyes that got my attention. They were all looking at me, but the minute my eyes hit Whisky, I felt lightheaded and had to stand stock-still or I would have fallen over in a dead faint.”

“Whisky” is Hank fucking Nightingale, my favorite of the hot guy posse so far…but I know Luke’s story (a newcomer in this book who was shot in the first) is coming up…so the series, if possible, may get even better. Just like all of these Denver guys, when they see something they want, they go after it with no chance of refusal. And Hank liked what he saw in Roxie. I mean their handshake upon meeting says it all:

But Hank was a good guy. He is the white knight. The police officer who walks the straight and narrow. Roxie is “grey”. She thinks she is tainted by her life with Billy, and could never be good enough for Hank Nightingale. Roxie is a high maintenance NUT. Her makeup routine is perfected in an hour, and she wears designer clothes and shoes (found on sale), even in Denver. But you can’t help but love her. Her inner thoughts were hysterical. The whole group grabbed her right up and were her BFFs immediately. Indy, Ally, Daisy, Jet, Tod, Stevie…..everyone just swooped in and made sure she was part of the posse. And just like the other guys, Hank took what he wanted immediately, with no doubts.

“Sweetheart”, he said in a low voice. “You were here to see your uncle until you stepped into Fortnum’s and you saw me and I saw you. You know it and I know it. You want me to convince you. I’m prepared to do that”

I swear, I think reading that made my nipples hard. (Sorry, TMI?)

“You’re moving too fast” I breathed. He kissed my neck then lifted his head and looked at me. “Sweetheart, I intend to move so fast, you’ll be dizzy,” he promised.

And it wouldn’t be a Kristen Ashley book if there isn’t a ton of action and adventure, shootings, kidnapping, and crazies.

“Tell me one thing, are you in danger?”

I lost my scowl and felt my body begin to melt.
Shit.
He was worried about me.
Billy had taken a sledgehammer to the door and he’d put his arm to my throat, once. Even after years of me running away and more than a year of no sex, he’d never raised a hand to me after the arm incident. He was intense, that was for certain, but every time I pretended to escape, he brought me back by talking me into it (or, at least, I let him think that).
I didn’t think I was in danger. I was just trapped.
“I’m not in danger, I just have… a situation. I’m fixing it,” I told Hank.

And of course, family. We get the Nightingale family, but we also get Roxie’s mom and dad who were just as crazy as Roxie and had me laughing my ass off. We also have Roxie’s hysterical best friend Annette and her boyfriend who fell in love with Denver and decided to open a second head shop there. Between all of them, and the antics of the regular Rock Chicks plus Daisy and Shirleen….and you have the makings for a funny-ass book.

I had put off reading the Rock Chick Series at first because it supposedly wasn’t as hot as the others, and a little lighter and funnier in spirit. Now that I have read this one, I can say this series is just as good as the others I have read, and I do think that it should be read before The Dream Man Series and The Colorado Mountain Series, and even The Burg Series, because characters from here appear in those series as well. It is killing me not to press purchase on Rock Chick Renegade, but I so look forward to coming back after a month break.

“She’s The One had just started playing when Hank arrived…..”What?” I asked. “Been waitin’ a long time to meet the girl in this song.”