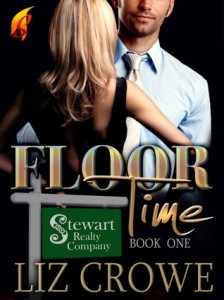 Jack is the Real Estate king of Ann Arbor. Everyone in the Stewart offices looks up to him. He is the consummate charmer and can attract the attention of a room (male and female) instantly. He is also the resident playboy. But Jack has a past. He was a Dom, and was dumped in a bad way by the last person he dominated and has put aside that part of himself. When he connects with Sara, a driven, hard working realtor in another office, sparks fly and Jack feels that Dominant side rear up again. Sara has never been submissive in any way, but Jack opens up a world to her that she knows she is meant for.

Both of them, Jack especially, kept pushing each other away, afraid of their feelings. Sara didn’t want to be a notch on his bedpost, and Jack didn’t want to be hurt again. But Sara has hot, long haired rocker Craig waiting to swoop on in. Jack plays it so “cool” that you just hate him sometimes, but then he pulls off something romantic and you can’t dislike him anymore.

I must admit, I read this on a day filled with distractions. What I’m not sure of is if I was more easily distracted than usual. While I really enjoyed this book, something kept me from connecting completely. Maybe because I prefer first person to truly connect, maybe it’s because Jack had a tendency to be a dick–I’m not quite sure what it was. I absolutely want to read more, and I hope that the next books are a continuation.

I get the feeling the love triangle will grow in future books, which I don’t think I would like. Sara was a little too much of a tease to Craig, and I hope that doesn’t continue. As cute and sweet as he is, I would like to read about him finding happiness with another woman.

The sex scenes were hot but there could have been more, and they could have been fleshed out a little more (fleshed-haha) but I am hoping they both let themselves go more in future books.

Dislikes:
-Had a little trouble connecting
-Jack was a little too full of himself and a dick sometimes
-Craig was too nice to be lead on so much
-The sex could have been even hotter and there were a few too many fade outs in the end.

This actually felt like an introduction to a series. It was short and there is definitely more to read, the next books in the series are rated progressively higher and I, for one, am looking forward to it!