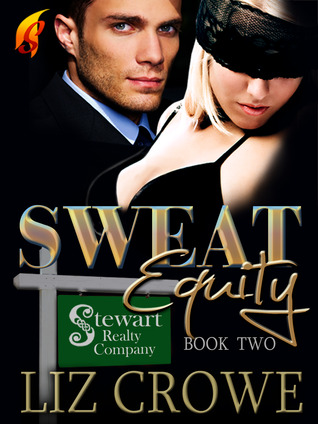 I had to review both Sweat Equity (Stewart Realty 2) by Liz Crowe and Closing Costs (Stewart Realty 3) together because Sweat Equity ended with a cliffhanger, and you can’t read #2 without going right to #3. I have to tell you, these two books were the most frustrating books I have ever read, EVER. I will split up the review so I don’t give anything away in this book review, but just know I reviewed Book 2 after finishing book 3 as well.

In book one, Floor Time, Jack and Sara got engaged at the end. So book two, Sweat Equity, begins with Sara planning the wedding and Jack just doesn’t want to deal with it. Arguments and distance ensue. Then Sara finds some old condoms in a suitcase, doesn’t listen to Jack’s explanation, and the engagement is off. Though these two can’t stop feeling the pull together, they are both such stubborn asses, they can’t admit what they want and trust each other. But there is hot little sweetie-pie Craig, waiting in the wings again to pick up the pieces. Craig is nice, gorgeous, understanding and wonderful, but poor guy, Sara just uses him to forget Jack; as much as she likes Craig, he isn’t Jack. (but Craig knows what he is getting into).

The back and forth between Jack and Sara was realistic of two stubborn asses who can’t say what they really feel and it drove me crazy. I began to think Sara was a selfish bitch. Not only did she use Craig, but she relied on her brother so much that it caused lots of problems in his relationship with Rob (though that is more Blake’s fault, she could have stopped it). Jack, at least was true to himself way more than Sara. He expressed his feelings a few times (though stupid asshole stuff came out more).

“Like what, baby? Like that you miss me?” She started to protest but he cut her off. “Do not say a word. Just listen a minute, if you can. I miss you too, like a fucking phantom limb, do you understand? You are a crucial, functioning part of me, always will be. But I get it. I’m a shit. I won’t deny. But I’ll never, ever be happy or complete without you.”

But Sara rarely said anything, admitted any weakness back. Sara jumps to conclusions, pushes him away and lets ONE stupid comment ruin her entire future with Jack, after he worked so hard to get her back. She puts him off all the time, but wishes he would stay. Both of them can’t stop obsessing over the other, but keep getting in their own way. Grrrrr, it began to really drive me nuts. Then the book ends with a major cliff-hanger!

I can’t even do likes and dislikes for this book, because, though I couldn’t put it down unless I got so annoyed I had to, and I felt like throwing my phone. A LOT. Yet I immediately purchased the next one!

There were a number of little errors (missing word or letter), and a lot of use of the expression “my scalp tingled” when Jack was near, and Sara wasn’t the only one with a tingly scalp. Apparently, this is common in Ann Arbor. But the series was written well, engaging, and came highly recommended as well as winning some awards. It was just frustrating as hell.

Because I honestly don’t know if I loved it or hated it, I’m settling on a 3 star rating, but I am rounding up. The sex scenes were well written but ran about a 4 to me.