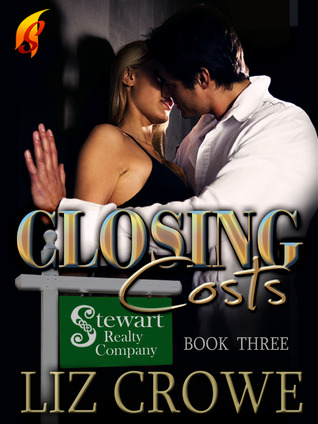 ***A few days later, I re-read this review. I sound angry and snarky, not usually my style. But  that bodes well for a book. Obviously I was emotionally involved enough to be angry. So if you like the type of book where there is lots of back and forth and love/hate; way more apart than together, this may be the book for you. I know many who love that. This series was highly recommended, and this review is my opinion. Closing Costs (Stewart Realty 3) is the third and kind-of final book in the Jack/Sara trilogy of the Stewart Realty series. The last one left off with Sara finding out she is pregnant, and we know she had unprotected sex with two different guys (What? Who does that? She is a grown, horny woman that should be on some birth control.) Then, we see a sneak peek at the next book where she is in a pool of blood convulsing in Craig’s arms. So, of course, I had to buy Closing Costs right away!

Sara had an awful pregnancy and almost died (Why? Because she didn’t listen to the Doctor and stay on bed rest).  She has a baby girl, Katie, but refuses to get a paternity test. Is she Jack’s or Craig’s? Sara decides Katie is HERS, and will raise her alone. Yet she doesn’t!!!! It seems to me that her brother Blake, & Craig do more of the parenting than she does when Katie is little, then it’s Jack when she is older.

Sara continues to love and want Jack, wishing he would step up and be with her, but she continues to push him away. They develop a co-parenting friendship, with both wanting more from the other, but neither reaching out and grabbing it. They hook up passionately a few times because the pull between them is so strong, then they fight and split up again! And in this book, it jumps forward in 2 year increments for 8 more years!!!!! Holy crap, every time I saw “2 years later” I wanted to scream at these fucking idiots! Either get together or find somebody else already!

Jack has grown and matured a lot. He is also an amazing dad once he finally connects with Katie. I can’t say the same for Sara.  She has taken a promotion at work, running the whole office (Jack runs the whole agency!) and doing a great job, but to me, it’s at the expense of her child. The whole book was about Sara saying one thing, but thinking another:

“You can go now” In her head, she begged him to stay.

God, she is such a selfish bitch! She strings them all along, even her brother, and denies her child a proper father (though she has a lot of uncles!). But mostly she denies herself happiness and is miserable. Jack has grown and matured and it came to a point where I thought they didn’t deserve an HEA, and Jack deserved better. When was this? When it looked like they were starting over (again) and she is supposed to meet Jack for a romantic reconciliation date:

She had been twenty minutes late on purpose. Let him wait.

There were so many other things she did that made me crazy! Sara also never seemed to be crazy in love with her daughter the way most parents are. Jack and Blake seemed to love the adorable little girl more. I understand the author was trying to show exhaustion and frustration, but Sara did that to herself. I would have liked to see a few rare moments of heart wrenching mother-daughter love, and never really felt that.

Ugh, so freakin’ frustrating. When I was about 88% through I had to put the book down for a while. I just stopped caring about the end. But I am pleased to say I picked it up and that there was a happy ending. I didn’t say an HEA, just a happy ending.

There were about a dozen small errors, usually missing letters or words, and one came right in the middle of one of the few hot scenes, totally distracting me.

I really liked the first book, Floor Time, but in my opinion having the couple go back and forth for 3 books over more than 8 years was too much, and the series went downhill to me.

Book four, Essence of Time is about Blake and Rob finding a surrogate. It begins with Rob and Jack sharing a woman as roommates in college. This one sounds really HOT and seems to provide a lot of back story, and is rated the best of all, but from what I understand, there is not a happy ending, and I can’t take any more of the drama with no happiness.