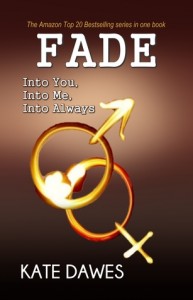 The Fade Series by Kate Dawes was a series of 3 e-book novellas (each only $.99 for now). Even all together, it is still a fairly short book, about 200+ pages total. They are now selling as one book. I had planned on reviewing them individually, but I wasn’t able to put them down in between, so I will review the entire story together anyway.

Fade Into You (Fade #1) Olivia is from the midwest and has been living in Hollywood for about 3 weeks. She left her cheating ex-boyfriend behind and is staying with a hometown friend of her sisters and working for a Hollywood casting agent. Then she meets Max. A hollywood producer, director, and writer, Max has the reputation of a very active casting couch. He sets his sights on Olivia, and after a few sexy flirting meetings, they have a super-hot encounter in his office. Then another, even hotter date.

“That was amazing”, Max said.
“The best.”
I wasn’t lying. It was indeed the best sex I’d ever had, no doubt due to him being the hottest guy I’d ever been with, and the way he did it–taking control, taking ME.

Then Max fucks up. Then makes up for it in MANY hot ways. And as soon as the book ended, I had to read the next.

This book was a great, 5 star beginning to a series. I would also give this first book a 5 for Heat.

Fade Into Me (Fade #2) continues right where the first left off, since this is really just 1 book broken into 3 parts. Max and Olivia take off in his jet to Napa Valley and get to know each other more. I really like that the author showed the couple getting to know each other rather than just fucking and falling in love. But Max was still holding back a bit. They also travel to New York together, and WOW, that plane sees some really HOT action! Then the paparazzi fuck things up…

This book was hot as hell. Max is dominant and controlling in bed, and a big part of this book is the sex (no complaints here, it was GOOD sex). This was even shorter than the first, however, and I wish she actually made each installment longer rather than shorter. Rating for this one is 4.25 stars, and 5 for Heat.

Fade Into Always (Fade #3). This book has Olivia rushing a little too quickly to forgive Max when she doesn’t even know the story, but a little more happens in this book. Olivia’s boss messed up, big time, and Olivia finds herself wondering what to do for employment. The mystery about her roommate comes to fruition, her family comes to visit, and a dangerous person is out to get her. All of this in about 60 pages.

This book felt rushed, almost like the author had the story in her head, but got a little bored with telling it. The sex was glossed over and all the problems were resolved too quickly, but I loved the end and epilogue. Rating for this one is 3.75 stars and 4.25 for Heat.

Series Review: I highly recommend this short series if you liked Fifty Shades and Bared to You. I liked the characters very much, the sex was amazing, and I liked that the couple was shown to get to know each other a bit before declaring undying love for each other. There were some really cute and funny lines, and I thoroughly enjoyed the banter between the couple. Max was sexy and romantic, and alpha to the core.

“I’ve never believed in fate,” he said. “But honestly, when I was writing that–specifically her character–it was different from all the other things I’d ever written before. Or since, actually. I’ve always had to work on characters for a long time, getting them right, changing things about them. But she was different. She just…came to me…out of nowhere, already perfect. Just like you.”

Do I recommend this? Absofuckinglutely. Do you need BOB or a man? Yup. Would I re-read it? Sure would. I will be looking forward to the Kate Dawes next book!

Purchase Fade 1-3 (All together) at Amazon | BN.com

****Much thanks to blog reader Dee who recommended this series