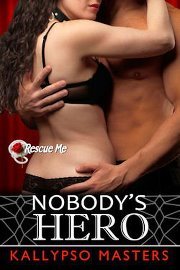 Nobody’s Hero by Kallypso Masters is the third book in the Rescue Me series (BDSM romance), and I think the one I most looked forward to. I fell in love with hero Adam and teenaged Karla in the first book, and I was excited to find out how that would work out for them. This series really needs to be read in order to get the full effect. Background story: 9 years earlier (in the first book, Masters at Arms) Adam, returning to the Marines after is wife of 20 years dies, meets (or rescues) 16 year old Karla. She developed a teenage crush on him, and over the years they kept in touch often. Adam thought of her in a guardian/protector sort of way–she was just a kid, and he was 25 years older than her. 9 years later, Karla’s brother dies, and she goes looking for Adam for comfort. Karla was a goth singer, and when she got to Denver she went right to a club audition…..at Adam’s fetish club. When he hears her voice, he comes out of his office and is immediately attracted to the singer–until he realizes it is Karla, all grown up.

Adam is a Dom. No question about it. He had a Master/slave Total Power Exchange (TPE) relationship with his late wife but secretly didn’t like the 24/7 thing. Karla is a young lady (25) who never loved anyone but Adam, and had never been with a man. Though the kinky stuff at the club wasn’t something he ever wanted to corrupt her with, Karla had other ideas.

I loved the beginning and end of this book. But I got lost there in the middle for a while. Adam did everything to push Karla away and deny his feelings for her. I understand that, after all, he feels like a dirty old man. But he went way too far with his lack of communication and denial. Karla, who was feisty at first became a meek little “kitty” or doormat in this case. While I was still able to see she actually was the strong one in the relationship, I couldn’t stand her behavior when she tried to be his slave. The way she was willing to do anything including change herself drastically for him really bothered me. But then I think about it, and realize she loved him all of her adult life, how could she not try?

The miscommunication, and the conclusions she jumped to were over the top–that’s why I had to lower this rating 1 point from a 5. There was way too much of it, and the middle just dragged on with her thinking he didn’t want her, and Adam thinking he couldn’t love her. If they just told each other how they felt so much angst and drama could have been avoided! A good Dom/sub relationship is all about honesty, right? Where was it??? Adam was so angry about Marc’s lies in the first book, but his were worse in this.

There was a lot of emotion in this story as well. Adam had to get over his late wife who he still hung on to for 9 years. He also had to confront the ghosts of his childhood in order to become whole to love Karla (I just wish he told her that!). I definitely cried a few times. Damian and Savannah’s story also began anew in this book, and I loved that!!! I can’t wait to read their story! Next week! I’m so glad I don’t have to wait long. So although I had to give a 3.75 (rounded to 4) I still enjoyed this book, I just had trouble with the lack of communication and self denial.

One last note: I love paranormal, but it had no place in this book. It’s one thing to feel like your dead wife has been guiding you down a path, quite another when they both actually hear her. That was a little weird. Had to move the rating to a 3.75 for that.