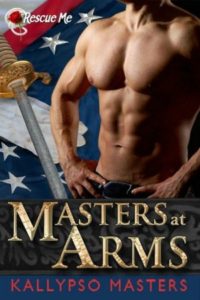 Masters at Arms by Kallypso Masters is a great start to the Rescue Me series. Beware, that’s what this is……a START. This FREE book is actually a prequel to the next three individual books. The book reads like an anthology until 60% through when the characters get together. All of their stories begin before they are shipped to the Gulf to fight as Marines. It isn’t that easy to rate because they aren’t full stories, but I will rate it 5 stars because I can’t wait to read more and I couldn’t put it down. I will rate it a 4 for heat, but I know the next will be a 5, and I can’t wait.

The book starts with Adam. Adam is an older Dom who just lost his wife to cancer. He has been on 4-5 tours of duty in the Gulf, and is headed back to Camp Pendleton when a 16 year old runaway is targeted in the Bus Station he was at. After rescuing her and taking her home to her parents, she develops a massive crush on him, though he feels fatherly towards her. But you can immediately feel the connection between them. They promise to keep in touch. At this point, I was about ready to quickly download Adam’s book, because I wasn’t ready to leave him yet, but continued reading for Damian’s story.

Damian Orlando is a busboy in a hotel. He sees a perfect young woman in what appears to be an abusive situation at the restaurant, and they seem to connect wordlessly. Later, when bringing up room service, he hears someone screaming in pain in the Penthouse. He breaks in and rescues the same girl from being sexually abused and tortured by two men who bought her for the evening. He takes her to his special place and they make love and connect in a way neither ever thought they could. When he brought her home to her father, he didn’t realize he (the father) was the one that was selling her as a sex slave, and also owned the restaurant and hotel Damian worked in. Damian was fired, and when he ran out of money, joined the Marines, and never saw her again.

Marc is working running his family’s ski resort after his brother Gino was killed in the war. He hates running the resort, but feels the obligation to do it after his brother died. He feels guilty that his last words to Gino were bad because he found Gino sleeping with his fiancé. Marc also offers occasional Dom services to select guests. He finally gets the balls to get away from his family, and do something to help others, so he enlists as well.

The three of them finally meet in a harrowing, awful scene in the war. Insurgents attacked with grenades, and they worked to save each other. There was death and dismemberment, and this was hard to read, but set the stage for who these men turn into after the war. When they return to the states, the three open up a fetish club in Colorado together. So begins the series…..

Though this particular book didn’t have a lot of hot scenes, it was still pretty hot. The stories were great and I can’t wait to read more about these guys and the women they fall for. I immediately downloaded Nobody’s Angel, and I’m loving it already.

Get Masters at Arms by Kallypso Masters FREE at