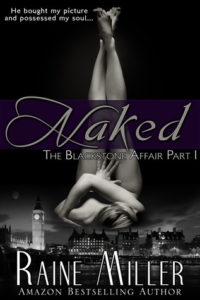 I wasn’t in the mood for another Dominating millionaire book. But a few of my blog readers recommended Naked (The Blackstone Affair 1) by Raine Miller so highly, that I had to grab it. And I must say, they steered me right!

You need to know from the start that this is the first in a 3 part novella series, and it ends with a cliffhanger. I knew this going in, so I was not taken by surprise, and I didn’t get angry as I do sometimes with cliffhangers. I also want to stress that it is a novella. 115 pages. Usually novellas are great for sexy times, but that’s about it. This one had a ton of deliciousness packed into its small size. And I mean deliciousness! Sexy, controlling alpha? Check. Likeable heroine? Check. Instant chemistry that almost burned off the page (iPhone in my case)? Check. Did I fall in love with the hero? Double check. So many great quotes I couldn’t choose? Check. Totally hot bedroom scenes? Check.

Brynne is a strong minded, very likable independent American, living and attending college in England. She has a broken past (that is not quite revealed in this installment) and is paying expenses by doing tasteful, artistic nude modeling. At one of the photography shows she is featured in, she sees, or rather feels, Ethan Blackstone. He buys her photo, and offers her a ride home. Ethan is the owner of Blackstone Security, and is in charge of security during the 2012 London Olympics which is just getting underway. He is a dominant, intense man, and he goes after what he wants.

“That picture changed everything. I was not the same after I saw it and I couldn’t go back to the man I’d been before seeing it either. Not after we met that night on the street. My whole world altered because of a photograph. A photograph of my beautiful American girl.”

Brynne can feel the instant heat and attraction between them, but resists it pretty well.

“Ethan Blackstone was dangerous territory for a girl like me – Great White shark is hungry for lone swimmer in cove territory.”

She felt something special, and felt safe with him, however, despite her misgivings. And Ethan wasn’t going to take no for an answer. But how can you say no to him?

“Ethan seemed blessed with the talent to make the most innocent word sound like hot, sweaty, mind-blowing sex you remembered for a long time.”

Well, when Brynne gives in, WOW. The sex was panty-ripping, against the wall hot. Ethan was amazing. He isn’t one of those rich guys that just wants a sub and no love. Ethan was the opposite. He was über affectionate and touchy and had no problems letting Brynne or anyone see how crazy he was about her.

“I want to be with you so badly right now. I want to take you home with me, and put you in my bed and have hours and hours with your body wrapped up in mine to do with as I wish. I want to have you there in the morning so when we wake up I can make you come, saying my name. I want to drive you to work and pick you up when it’s time to leave. I want to go to the shops with you and buy food we can cook for dinner. I want to watch some crap TV show and have you fall asleep against me on the couch so I can watch you and hear you breathing.”

For a novella, I was surprised I got so invested in the characters and got so into the book. I read it in one sitting and fell totally in love with Ethan.

If you know going in that this is basically only 1/3 of a full novel, you will feel way better when you read it. Despite my being a little tired of the rich controlling man stories, this one totally grabbed me, made me fall in love, and didn’t let go. I can’t wait for the next, and I have no regret that I didn’t wait for the second to come out to read this.

You should also know this. The inspiration for Ethan is David Gandy. I pictured him before I even knew that was who she used. Raine was also inspired to write this book by first seeing the photograph on the cover. 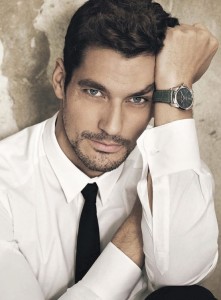 “The sex never ended with this man. And I was on board the sexy train right with him, flashing my frequent traveler pass.”

I’d like to thank my readers, Marilyn and Jackie for recommending this one.