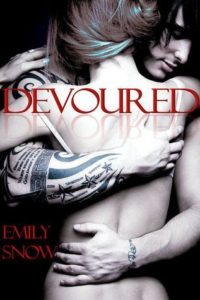 Devoured by Emily Snow grabbed me immediately with the description and cover. A tattooed rock star Dom? Hello??? How could I NOT read this? The cover is great, but does it look familiar? It’s a brightened up version of the same photo from Tempt Me by Olivia Cunning.

The guy is also on the cover of Easy. I guess he is stock photo’s long haired tattooed rocker dude.

Sienna is working in Hollywood as a wardrobe assistant on a TV show, but has to fly home to Nashville to help her grandmother fight foreclosure on the family home. A rich rock star already has plans for the sprawling log home. When she sees the man in court, she realizes it’s Lucas Wolfe, a rock star she almost hooked up with 2 years before but he threw her out of his apartment when she refused to be handcuffed to his bed.

For Lucas, she is the one who got away, and he clearly wants her back. He offers to give her the deed to the house if she will work as his personal assistant for 10 days. No sex until she totally submits and ends up begging him. Sienna is very loyal to her gram and will do what she has to to help, even spend 10 days resisting the gorgeous rock star that she desperately wants.

You can feel the connection between the two of them. Lucas was sexy and dominating as hell. He was literally the wolf (his last name is Wolfe) to her. It always seemed like he was ready to devour Sienna.

“He’s shirtless, wearing nothing but a pair of jeans that ride low on hips. Lucas Wolfe is all muscles and tattoos and sexiness, but it’s his music that has a way of getting to me. It strips me down.

And I let it. The only difference is that now, it’s in person, and once it’s over I’ll have to face the real Lucas Wolfe and not the poor excuse I keep in my nightstand drawer.”

The build up was delicious….but then, I don’t know….it just kind of fell a little flat. I still liked the story a lot, I just expected more. There was a lot of build up to not much.

Kylie, Lucas’s sister was a stand-out great character. I would love to read a story about her. Though I liked Sienna, she was a little too wimpy and controllable, and didn’t put up much of a fight.

The book had some pacing problems and issues where I had to go back a little to figure stuff out. First, the pacing. It was a little slow to develop at the beginning, then the second half was very rushed. Conversations would begin, then the internal thoughts would take up a page or two, and the conversation would continue where it left off, forcing me to go back the two pages to see what sentence was being finished. Lastly, I didn’t feel the love. The attraction was there, but where was the connection?

I enjoyed the book and story. I will absolutely read the next in the series. But my expectations were a bit higher from the description and first half of the story. This is a new author though, and I think we will see good stuff from her.

This book was around 200 pages, and the sequel, Consumed, is expected to publish in next September, hopefully with more sorely needed background on Lucas.

***This book has been picked up by a publisher so a newer version exists that has perhaps been edited more.

Emily released a prequel to this book called All Over You. This book takes place two years before Devoured when Sienna and Lucas first meet.