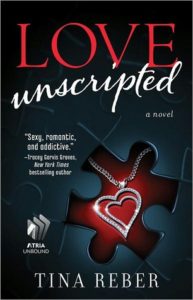 First thing you need to know about Love Unscripted by Tina Reber, besides that I absolutely loved it even more the second time, is that it is L-O-N-G. This is not a bad thing! Not at all. This is a like reading a book trilogy all in one. And I would have been happy and satisfied if it ended after Love Unscripted. But when you find out there is a sequel, you just want to “squeeee!”

I read Love Unscripted in September of 2011. I have read probably about 225 books since then, but this one has stood the test for me. Knowing that Love Unrehearsed comes out next week, I decided to do a re-read so it is nice and fresh in my mind. Normally I post here at Ana’s Attic daily. Did you notice I skipped a day? I couldn’t put the book down. Since I know all of you who read my blog can understand that obsession, I figured you’d let me slide.

Taryn Mitchell owns a bar by the ocean (and lives above it) in Rhode Island. Ryan Christensen (think Robert Pattinson, fame-wise) is filming the second movie based on a book trilogy nearby. Taryn isn’t the type to be star-struck. She has never read the books, or seen any of his movies, and doesn’t understand why her friends and every woman in a 2 hour radius is screaming his name. One morning, as she steps out the front door of her bar, Ryan comes running down the street with screaming fans chasing him. He ducks through the bar asking for the back door, and the fans think he escaped. But he had accidentally used the door to Taryn’s apartment. In the midst of a panic attack, scratched up and with ripped clothes, Taryn let him calm down, cleaned him up, and ended up spending the day together in the closed bar.

From the minute they started talking, I was smiling. Both characters were so real and likable. Ryan is so sweet and adorable, and Taryn, though a little too perfect for him was totally likable. One thing I really loved is how they took their time falling in love. Their relationship developed at a pretty slow pace at the beginning. Taryn was afraid of getting hurt when he leaves, and Ryan just wanted to take it slow to not scare her away. This would be my thoughts (and it was her friend’s):

“You know what I think? I think you should stop all this nonsense and screw the shit out of him until he passes out from exhaustion…you’ll have to feed him, of course, to keep his energy level up, but make sure you hide his clothes so he can’t get dressed. Men can’t run when they’re naked.”~Taryn’s BFF

As they became a serious couple, you couldn’t help but fall even further in love with them.

“Gently he rolled me onto my back; his eyes opened and locked onto mine. ‘Are you sure? ‘cuz I want you more than air right now.'” ~Ryan

Sure, they had a lot of realistic issues thrown at them. Mostly the paparazzi, and screaming fans, but they dealt with them well. If the whole book was like the first 2/3, I would have loved it and given it 5 happy stars. But then, BAM!!! Shit hit the fan, and everything started happening!!!! I couldn’t put the book down during the first 2/3, but during the last 2/3, there was NO. WAY. And this was a re-read!!!!

I laughed a lot, I cried, I swooned. I totally fell in love with Ryan all over again. I love that he never lost his down-to-earth personality. He loved acting, but hated the crap that went with it. I loved this book just as much, if not more, the second time around.

“I don’t want anyone else – just you. And no matter where I am, wherever I go, you’re the only one who is holding my heart.” ~Ryan

Things I wish happened: (I couldn’t find a dislike)

The end was happy. I was good with it. Is it a HEA? Not really. More like a Happy-for-now. But lucky us, because book 2, Love Unrehearsed, comes out on September 14th!!!
Would you like to know my initial opinion? Check out my original review, one of the first I wrote for Ana’s Attic: Love Unscripted by Tina Reber review.
Since I read Love Unscripted last year, I became Facebook friends with Tina Reber. I have to tell you, she is AWESOME. She is funny as hell, has AMAZING taste in men, (she posts hotties all the time), great taste in books, and she promised Love Unrehearsed will be even hotter. Tina will also be visiting us here at Ana’s Attic!!! I’ll post more information very soon, but I can’t wait!!!
Purchase Love Unscripted (around 600 pages) at Amazon || BN.com || iBooks
Purchase Love Unrehearsed (book 2) at Amazon || BN.com || iBooks
.
Related Posts: