“Dreams do come true if you point yourself in their direction” 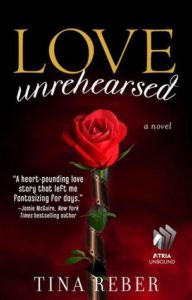 Love Unrehearsed by Tina Reber was everything I could have wished for and more. It has been over a year since I read Love Unscripted the first time, and I have patiently awaited the next chapter in Ryan and Taryn’s life. It could not have been better in any way! I loved Love Unscripted so much. I thought that a second book, without the jittery butterflies of first falling in love, couldn’t be as good. But I was wrong. It may have been even better.

“I meant it when I said forever. That’s why. You are IT for me”….. “They only get the outside, not the inside. That’s for you……You bring me peace. That’s mine to cherish, not theirs”

As I write this review, I am going back through the pages and I wan’t to read the whole thing all over again. So much happens in this book. My favorite thing? Ryan finally mans up and stops letting his “handlers” tell him what to do.

“It’s time to go big or go home. I want everyone to know you’re mine, Taryn”

Ryan…….he is so sweet, loving, sexy, hunky, honest, and real. He is so devoted to Taryn, and never wavers in that devotion. He’s also insatiable, and since Taryn travels with him in this book we get LOTS more of the good stuff, and the talking about it was almost as hot as the doing it!

“Oh, no. No sleeping. We’re just taking a rest. We still have to test the shower and the bed and that dining table over there. And you still have four more orgasms to achieve” ~Ryan

One of my favorite quotes of the book:

“But I think he broke my vagina”

What did I love the most? Nobody acted stupid, nobody ran away, there were HUGE obstacles to overcome, and they did it as a team, together. They talked through their problems and worked them out as they came along! How refreshing! They became partners in every sense of the word. Sure, Taryn still had some major insecurities, I mean, who wouldn’t? But Ryan tackled each and every one as well as he could. And Taryn took such good care of Ryan. They made a great team.

“You’re my everything, Taryn”

It is clear how hard it can be to live in Ryan’s world. The constant media scrutiny, the screaming fans, the travel, the death threats, watching your man “make love” on set to another actress, and paparazzi making it difficult to have any privacy at all, but they worked through it. On top of all that, Taryn had her own numerous issues to deal with between her bar, her family and her friends. Yet they took care of it all, together, and learned from each mistake they made.

There was another lovely part of the story. Mike the bodyguard, who may be almost as swoonworthy as Ryan. Always a gentleman, manly, sweet and protective, he is a great best friend to both Ryan and Taryn. And he becomes even more as he gets his own storyline (no spoilers here!).

Dislikes: (none, but I try to find something for every review)

This book had me smiling, laughing, crying, gasping, and swooning. It was emotional, fun, delicious, and completely fulfilling. Together with Love Unscripted, this may be one of my favorite reads ever. I can not recommend it highly enough!
.
**Thank you so much to Tina Reber, for providing me with an advanced copy of this book, as well as one that I gave away. And thank you even more Tina, for writing this book! xo
.