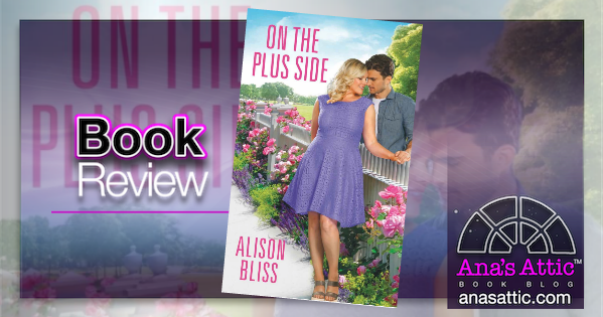 On The Plus Side by Alison Bliss

Sadly, aside from maybe two lines in the book and the cover and title, you would never know she was plus-sized. Based on the title, I would have liked for her size to play into the story a little more, but it didn’t at all. Valerie had every single man she ever wanted drooling all over her. Except one. Her older brother’s best friend, Logan Mathis.

“There was only one guy who she wanted to remove her clothes for, yet he didn’t seem to have any interest in seeing her naked. The idiot. Maybe she was narcissistic, but there was no way in hell she would admit that the only guy she’d ever wanted was the one guy she couldn’t have.”

Logan has come back to town, opened a bar, and is having trouble. He really needs help, and Valerie, determined to flirt with Logan till he gives in, tells a little white lie, and says she is a registered bartender to get the job. She LOVES being the center of attention, and she has mad skills behind the bar, so it’s perfect for her, she gets to put on a Cocktail-type show every night and flirt with her crush at the same time.

Logan knows she is off-limits and it kind of makes him a grumpy asshole. He is kind of a dick to her until he finds her “list”. What is actually a list of things she won’t do in bed, he mistakes for her bucket list, and he’s not letting her do that shit without him! At this point, I was literally cracking up.

“…if she thought for one second that he would allow her to go to a glory hole, then she had another think coming.”

Once he gave in and stopped being a dick, I liked him more, but still, I found that he never gave her a chance to speak, and always just cut her off. And her brother! Don’t even get me started on that fuckhead, Who the hell is he to tell these adults what to do? Valerie is supposed to be this confident woman, but she let these men walk all over her and treat her like a child, and I began to lose respect for her.

The sex was hot. Even though I like the cover, like the first, it seems way more wholesome than the story!

“A smile lifted his cheeks, and his hand made a couple of slow circles over the round curve of her cheek, as if winding up for the pitch. Then he smacked her on the ass even harder this time, leaving behind a subtle sting in his palm from the effort. A sharp gasp flew from her lips, and a red hand print appeared almost instantly.”

The one line that addressed her size, was the one I related to the most:

“If only I could be more like you. You’re always so confident and carefree when it comes to your size. You own it rather than letting it own you. Unfortunately, we’re just not all that way.”

I started this series because I wanted to read about plus sized heroines, being one myself. But this story refers to her as curvaceous, but other than that, her size has absolutely no baring on the story, and was barely a blip. I loved the first, but this one, for me, didn’t come close. I did laugh out loud, and I like her writing, but I really hated that this confident, adult woman was treated like a child and took it, and then proved she deserved it at one point. I want to read the next in the series, but I am hoping that we address the “plus size” title of “More to Love”.

Purchase On The Plus Side by Alison Bliss 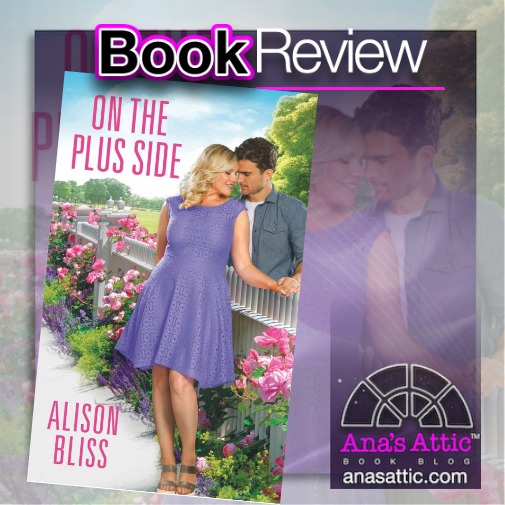